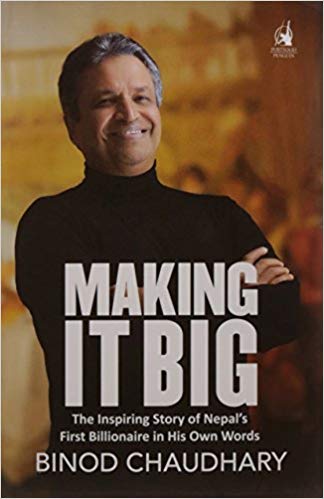 “‘You have to sacrifice something to gain something else’ my father had told me. This was a piece of fatherly advice I never took seriously. I want everything in life, not one thing at the cost of another. In my opinion, compromising on something to get something in return is not good management,” says Binod Chaudhary, one of Asia’s most prominent businessmen and the President of the Chaudhary Group, in his memoir, Making it Big.

Published by Penguin, this autobiography is as much a manual to success as it is the story of Binod’s journey. Today, the Chaudhary Group based in Nepal is a big business conglomerate. But, it’s very humble origins and the ethos behind its success is what the book talks about.

After an impactful introduction that talks about a near death experience after an earthquake, Binod Chaudhary leads the reader right into the core of the story of his life. It is fascinating to read about the stories of his struggle, and that of his predecessors. Though based in Nepal, the family has origins in India and the book starts off with this background. His brave grandfather left Rajasthan and set shop in Nepal on the invitation of the king of Nepal. The savvy Marwari spirit shines through as he continues the story of the growth of this family business.

Chaudhary was not born with a silver spoon, but his early experiences honed his business skills. In an amusing anecdote he narrates an entrepreneurial venture he did at school. “I do not see any real difference between the business I do these days and the business I did back then at school. Only the scale is different,” he writes.

The book is quite detailed and has a lot of information packed into it. He talks not only about himself and his business, but also the world around him. He talks about his interests in films, music and cars. The books also describes in detail his interactions with numerous personalities from all walks of life. I found these instances quite interesting, especially when he talked about his interactions with various Bollywood personalities. His tryst with politics and politicians gets good mention as well. For me, reading about his experiences with Narendra Modi was really insightful.

The manner by which the book weaves in political and social scenarios in Nepal with his own personal familial and business situation, makes the book quite broad in outlook.

What can a reader take away from Making it Big? I think that a reader, especially someone who is an entrepreneur looking at growing big, can take a lot from the instances and the lessons described herein. Binod has shared specific case studies of professional battles, chronicled the challenges in transforming the business and talked about how he navigated varied obstacles on the path.

The last part of the book, where he outlines his mantras for success is also quite revelatory. Of course, after having read about the specific challenges he has faced, one is able to relate better to the last chapter. He has been quite honest and also included a chapter on self-assessment where he talks about areas that he can improve on. He has thus been very self-reflective, and evaluated his weakness.

Making it Big – The inspiring story of Nepal’s first billionaire in his own words is a thick and detailed tome. However, Binod Chaudhary’s simple language, honest and forthright approach makes it a great read for entrepreneurs at different stages in their journeys!

Myriad expressions of the Mahabharata…whose view is it anyway?