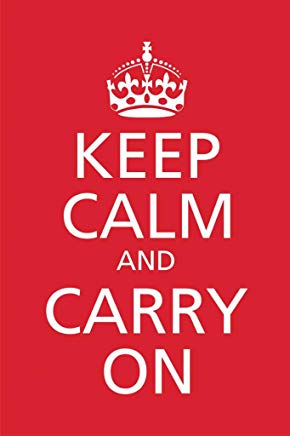 It is said that words, when used as decor within your home or office have a certain resonance. It was during a slightly stressful period in life that I first read this simple line with a mere five words- Keep Calm And Carry On. Soothe they did…and these became a kind of mantra. I started looking into the origins of this simple phrase.

As I discovered later, this famous little phrase has an interesting history behind it. It was way back in the year 1939, that the British Government officially introduced motivational posters to boost public morale in the wake of the soon-to-come World War II. However, it seems that the poster with this particular phrase, Keep Calm and Carry On, was not really displayed publicly. The reason for that was that it was to be issued only upon the invasion of Britain by Germany. This never happened, and hence the poster was never officially seen by the public! These posters were also destroyed in large numbers later (they were reduced to pulp for that purpose). But, no one would have ever imagined that it would become a design rage, and a truly iconic image of the 21st century.

It had some unique features- a bold type face, the Tudor crown, and a very clear message. The bold red background provided a perfect canvas for the white text. It was all bold and clear! Though this perfect message was not used at all for the purpose intended…it has fulfilled many a purpose for many others.

The “trend” of displaying this caught on way later in the year 2000, when a bookseller from Barter Books found a copy hidden amongst a pile of dusty old books bought from an auction. The poster was displayed in the store and immediately sparked a lot of interest. The rest, as they say is history. The original designer many never have imagined the craze that this simple poster would evoke!

The story of three posters

Keep Calm and Carry On was just one of the three designs commissioned by the government. The other two were in fact used widely. “Freedom Is in Peril. Defend it with all your might” was one. The other was: “Your Courage, Your Cheerfulness, Your Resolution Will Bring Us Victory”. These two posters were also stylistically similar to the Keep Calm and Carry On poster.

Keep Calm and Read on…

The creative spin that Keep Calm posters have generated is just amazing. Right from posters to T-shirts, mugs, mobile covers and what not, one finds the keep calm expression everywhere. People have their own spin on this.

When an idea pervades popular culture, it could lead to some really interesting products. The trademark « Keep Calm And… » has been interpreted and reinterpreted in many lifestyle accessories. Mobile covers, bags, T-shirts are just the tip of the iceberg. The list is endless and various designers and individuals have experimented with the “Keep Calm” expression. The mass appeal continues.

Keep Calm and Carry On…a simple message that the British government hoped would reassure the public in dark times. But, as chance would have it the appeal of these four simple words have taken the world by storm. Despite it not having been used for the world War, the original purpose is, in my opinion still fulfilled. Whatever challenges you may face in your life, I am sure this warm hearted and simple message- Keep Calm and Carry On will surely see you through, offering comfort in difficult times!

The mythical land of Inkredia beckons lovers of fantasy fiction…