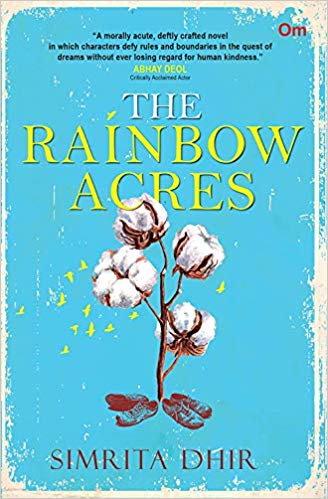 The Rainbow Acres is a story of survival. Two parallel stories converge slowly. It is the story of Kishan Singh, a lowly village boy from a small village in India. It is also the story of Sophia, whose life is torn by the political situation in Mexico. Both could not be more different from each other. And yet, their stories are similar when seen from the human angle. Two alternating narratives converge to tell a gripping tale. Bookedforlife chats with Simrita Dhir, author of The Rainbow Acres, to know more….

Immigration is the underlying theme of the novel. Today, this is a pressing issue in itself world over. How would you place the novel in the context of modern times?

The Rainbow Acres unfurls in the early twentieth century, but displacement and migration continue to be deeply relevant issues today where thousands risk life and limb every day in the search of new beginnings. In The Rainbow Acres, Kishan Singh’s hazardous journey across two oceans undergoing which, he nearly dies, is no different from the tragic refugee deaths that occur on boats today. Only in the last few years, nearly 9000 migrants have been lost in the Mediterranean. Sophia’s story, too, is deeply reminiscent of the plight of the Central American refugees today who undergo perilous journeys to start new lives in a faraway land. Across the world, the number of people forced to flee their homelands has increased to 65 million and refugee admissions in the United States have been trending upwards. Immigrant narratives are vital to conversations about displacement and migration and it is my hope that The Rainbow Acres will promote empathy for immigrants and refugees, thereby facilitating a deeper understanding of those issues.

The alternating narratives of Kishan and Sophia provide an interesting way to experience two different stories. What made you adopt this narrative technique?

My attempt in writing The Rainbow Acres was to focus on the immigrant experience as well on the universal themes of love, loss and moving on. Kishan Singh and Sophia’s journeys evolve along different paths in starkly different surroundings but both stories embody the quest for more and better in life. Both protagonists are dreamers who tend to look beyond the horizon. Victims of loss and denial, they fight circumstances as well as thought-provoking dilemmas while never losing their nobility. Their uncanny belief in the second chances that the faraway land seems to offer, drives their journeys. By alternating the two narratives, I wanted to draw attention to their unique yet universal immigrant experiences. I also thought that this narrative technique would offer a more interesting reading experience where the reader would be delving in two very different narratives spanning across two different continents. Even as the two narratives run parallel, they promise to converge at some point, which I thought readers would find engaging.

Both protagonists belong to different countries and encounter different situations. They have nothing in common but yet so much in common. Was this a way of portraying a common human experience?

Through history, people have migrated in search of greener pastures. As true as that fact is, a migrant is also a romantic who believes in the promise of the unknown, someone who does not sit around in his place of origin and wait for his luck to change. A migrant is a believer and a doer who takes charge of his life and destiny, someone whose sense of enterprise nudges him to break away from the familiar, take risks and embark upon the new. And while their backgrounds and experiences vary, both Kishan Singh and Sophia embody the immigrant optimism and grit. Kishan Singh loses the most vital aspect of his existence and Sophia’s entire world crashes before her eyes. Their lives are torn apart, they are devastated but never do their really let go of that inherent belief in themselves and in the world. They pick themselves and move on even as they know that they would face yet more hurdles along new paths. Sophia aptly says in the novel, “The human journey is not the travel of the sun or the moon. It cannot be predicted. One can’t fight one’s story, it always wins.” As their stories unfurl along new roads, Kishan Singh and Sophia continue to discover themselves anew. To quote from the novel, “Everyday was a journey. The odyssey never ended, going on and on instead in a perpetual quest of open roads and yet newer beginnings. And wild ambiguous milestones made it worth taking.”

How have your personal experiences informed the narrative? Or rather, have they?

This is a really interesting question. Well, I am an immigrant and a proud one for that. My immigrant experience defines me in many ways and that is the reason that I wrote The Rainbow Acres. Having said that, I must mention that the California that I immigrated to in the year 2000 was very different from Kishan and Sophia’s California. The year 2000 was not just the beginning of a new century but also of a brave new millennium. The California that I encountered was an out-and-out multi-ethnic place, the only US state to have no majority race, where everyone belonged, and no one was an outsider, so to say. Unlike Kishan Singh and Sophia, I came to attend university on a F1 Student Visa. Indian students on campus were perceived of as being insightful and intelligent. Generally speaking, being Asian was considered “cool”. I did not encounter any of the confining racial boundaries that Kishan Singh does in The Rainbow Acres. I, however, share Kishan Singh and Sophia’s enamor for the unknown in abundance and find myself invariably drawn to all things new. There are lines in the novel that capture the immigrant mindset. They are as true for me as they are for Kishan Singh and Sophia. “Far horizons were alluring, layered with miracles and romance. And they were always receding farther, arousing the urge to sprint to newer haunts, braver ideas and infinite dreams.”

Kishan Singh asks a question in the novel- Is the journey worth the struggle? How would you, as the author, answer this?

That is a question for the readers to ponder on and come up with their own answers. The journey motif is integral to the story. There are lines in the novel about the course of journeys, “Stories are no one’s slaves. They follow their own course, not anyone’s wishes or dictates.” Long journeys, such as the ones that Kishan Singh and Sophia undertake to reach the fabled land, are bound to be difficult and unpredictable. Along the way, even the most optimistic of voyagers, like Kishan Singh, is bound to reflect upon the question, “Is the journey worth the struggle?”

As I see it, The Rainbow Acres is a story of strife, struggle and moving on. Inspired by historical events of the early 20th century, it salutes the courage and resilience of the pioneer Punjabi farmers of California. Much like Kishan Singh and Jaspal Singh Dhillon in The Rainbow Acres, those pioneers enriched the California landscape with their hard work and the courage of their beliefs. The Rainbow Acres pays homage to their difficult journeys and hard-earned success in a relentless time.

Through Kishan Singh and Sophia’s brave odysseys across borders, the novel also celebrates California’s exotic Punjabi-Mexican community of the early 1900s, which was a vibrant melding of two cultures and a truly secular, bi-ethnic set-up that came to exemplify a new, eclectic California.

Human kindness from unexpected sources on the journeys that the two protagonists make, is something that is brought out quite poignantly. Was that a conscious decision while writing?

Interestingly, kindness is instinctual, and it springs from courage and inner strength. Practicing and experiencing kindness are truly sublime experiences in which both the giver and receiver are transformed forever. In The Rainbow Acres, Kishan Singh and Sophia take difficult journeys across unfamiliar terrain, separated from family and everyone who is familiar. In battling hardships, both protagonists are rescued by complete strangers who feature only for brief moments, disappearing immediately after rendering help, but the reverberations of their acts of kindness continue to echo through the length of the novel. Towards the end of the novel, when Kishan has a chance to make a difference in the life of an oppressed wife, he doesn’t hesitate to help the woman. He is able to manifest kindness because in the past, kindness has been meted out to him by complete strangers – the jeweler in Jalandhar, and the girl on the ship.  Similarly, Sophia who has been telling her daughter that “there is danger in men”, dramatically turns over a new leaf upon encountering overwhelming kindness from a stranger on the boat at the most crucial time in her life. She never forgets that stranger or that moment, and upon gaining stability, she decides to help others who are wrecked by the Mexican Revolution. So, essentially, the novel depicts that in life, one has a choice – either to be dismissive and indifferent or to be kind and thoughtful. Kishan Singh and Sophia are compassionate because they have known suffering and have received kindness from unexpected sources.

Yes, it was a conscious decision on my part to focus on the benevolence of strangers. The representation of strangers in fiction has, more often than not, tended to be one of distrust. So, I wanted to shift that stance and show how in their limited roles, strangers have the ability to leave a lasting impact, gradually leading the protagonists to becoming the finest versions of themselves.