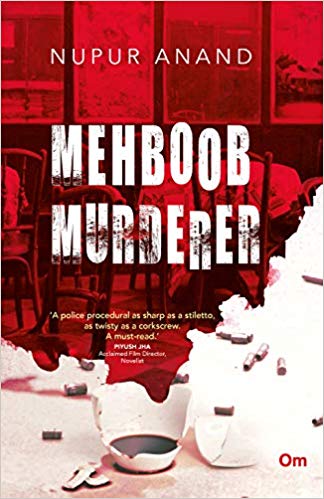 Mehboob Murderer, which is journalist Nupur Anand’s debut novel, revolves around a mass shooting in a cafe. Who killed the six people in a Parsi café? Why is the murderer still roaming free? Pressure mounts on recently promoted officer Abbas to solve this mystery. On one hand there is pressure from the media. On the other, there is political pressure. In midst of this is a tale that reveals and reflects the struggles of the people living in Mumbai.

Mehboob Murderer slices open the underbelly of the so called ‘City of Dreams’. The story captures the flavour of Mumbai perfectly and even draws inspiration from actual events that rocked the city – be it firing in cafes or murders in an isolated factory compound. The way the life of policemen is portrayed, makes the reader want to offer comfort and support to them! It drives home the point that they live, breathe and exist around their jobs. One can almost smell and taste the cliché of ‘feeling alone in a crowd’!

Any good book captures a wide repertoire of emotions. The struggle, loneliness and feeling of being overwhelmed by circumstances come across strongly. What I would have loved to feel with these is also the sense of exhilaration and contentment. Another thing that would have elevated the book is the entire ‘sleuthing’ process. A lot the clue hunting is coincidental or not clearly driven home. Mehboob Murderer focuses so much on the individuals that it slows down what could have been a racy, nail-biting plot. It nevertheless touches the soul of Mumbai city – No matter what problem befalls or disaster strikes, life goes on! in that sense, this is a novel that beautifully captures the spirit of the city.

Mehboob Murderer has benefitted from the extensive journalistic experience of Nupur Anand. The story is based in the heart of Mumbai and captures the truth of the ‘Golden City’ where everyone is fighting their own battles and demons.

Men-Women, Mars-Venus & All that B***S*** by Rashmi- The Man Woman Relationship Rediscovered.

The Gift of the Gab by Hory Sankar Mukerjee