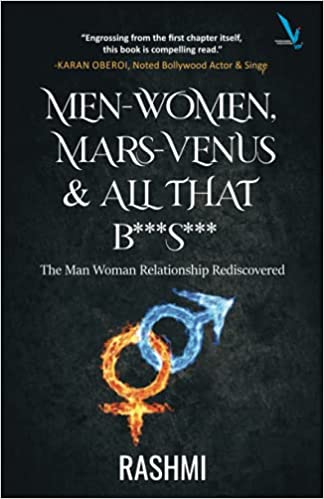 In 1992, Psychologist Dr. John Gray published the cult book Men Are from Mars, Women Are from Venus. The book became a popular paradigm to explore gender differences. Two decades later, much more has been discovered about gender and more specifically, the role that conditioning plays in the differences between men and women. Men-Women, Mars-Venus & All that B***S*** by Rashmi (Vishwakarma Publications) attempts to examine gender through the lens of history and conditioning.

This book tries to provide insight into gender dynamics for anyone seeking to study the topic. Rashmi bases her thoughts and inferences on research studies. While inclusion of references for the research would have definitely added to the book, there are still some interesting takeaways for those interesting in exploring the quintessential battle of the sexes. Here’s a little chat we had with the author…

You mention in the book that you conducted about a hundred interviews. Could you describe the format and the manner of the same?

I called people in groups, sometimes to my place, sometimes in a café, at times by going to their houses. And the interviews with the third gender, I conducted, by going to where they live in our city. I asked them simple questions about love, intimacy, marriage and relationships.

You have also quoted several research studies that point out to conditioning over generations that has led to current misperceptions about gender dynamics. Give us three top things that parents must keep in mind while raising their kids?

Parents must nurture their kids without the baggage of gender. But for that first THEY must change their thinking to suit unbiased upbringing. For instance, girls must necessarily help in the kitchen and boys with laborious tasks, or girls must be demure and boys boisterous, girl’s nurturers and boy’s providers…thousands of such beliefs, are so gendered, that they should be relegated from our systems. Boys and girls should be taught to be proficient at both. It is then, that they will get a wholesome upbringing.

Never judge your children based YOUR expectations from them. We are so caught up with our own perceptions of acceptable behavior that we fail to see hundreds of their other shining facets. We should remind ourselves that a diamond has many facets that reflect light but by restricting our own vision we fail to see brilliance that may be reflecting from so many other sides.

May sound cliched but ‘respect’ is a right, and not something that you give. Respecting your own children will teach THEM respect, it is as simple as that. Because they are your children you may tend to disregard them as individuals, but that is most inappropriate. Teach them to be good human beings, teach them to be self-sufficient, teach them to be righteous, teach them integrity, truthfulness and the rest will fall in place.

I find it interesting that you trace the dynamics of gender relationships right from eons ago! There were stages in the history of mankind when these gender roles were no different. I know you’ve explained it in greater detail in the book, but briefly, when did the equation between men and women change?

The equation between men and women changed when human beings started forming permanent settlements. Permanent settlements demanded division of labour. And with division of labour, men became the protectors and women nurturers. Not that it wasn’t like that earlier, but the lines between roles were fairly blurred. Women were champion hunters as well and men yielded to the areas of their interest. But these drastic changes were inevitable and therefore only polarized the sexes further.

What would an ideally balanced society look like? I really like the way you put it, that men and women are not the ‘opposite’ but the ‘complimentary’ genders!

A balanced society would be easier to live in, without the gender drama and the symbolism associated with it. Where a woman won’t be judged for being an innate protector and a man an innate nurturer. Where a woman will not be labeled for expressing her desire for physical intimacy and man will not be judged for being kind hearted. Where men and women would be able to express themselves with abandon and form healthy relationships than be dependent on some warped idea about the opposite sex. Where the polarity is so minimum that understanding the opposite sex would not be an issue at all.

I find your analysis of how human beings have evolved quite interesting. Considering that today Artificial Intelligence is a reality and has pervaded every aspect of life, do you think that it can play a role in addressing the disparities that have developed between the genders, where due to years of conditioning both genders may have had to compromise on their authentic emotions?

You know after all artificial intelligence is also man made. What is fed into those chips comes from a gendered human mind. For instance, an Alexa will always be projected as a sweet talking, order taking, gratifying woman…chuckles.

I don’t think anything will change until we change. Artificial intelligence will always reflect the current human intelligence that may be far from perfect as far as gender is concerned.

The last three chapters do have practical tips for the readers. And while that is pretty useful, how would you like readers to approach the book?

I would want the readers to keep an open mind, because it is a radical point of view, but is corroborated with facts and meticulous analysis. A person with a closed mind will never be able to associate with it. There is so much food for thought in the book that, it may test your intelligence. But the content of the book will prevail in the end. If not completely change but you will at least be forced to think hard and deep.

The last bit of advice, that is, “Learning to observe yourself” is such a crucial thing today! How can readers incorporate more mindfulness into their lives?

I cannot stress the importance of mindfulness enough. Mindfulness simply means being aware of your actions, thoughts, sensations and feelings. It means pulling yourself away from the downslide of emotions, and looking at yourself as a third person. As an observer, and believe me it works like magic, you can take control of every single reaction/action by simply being mindful.