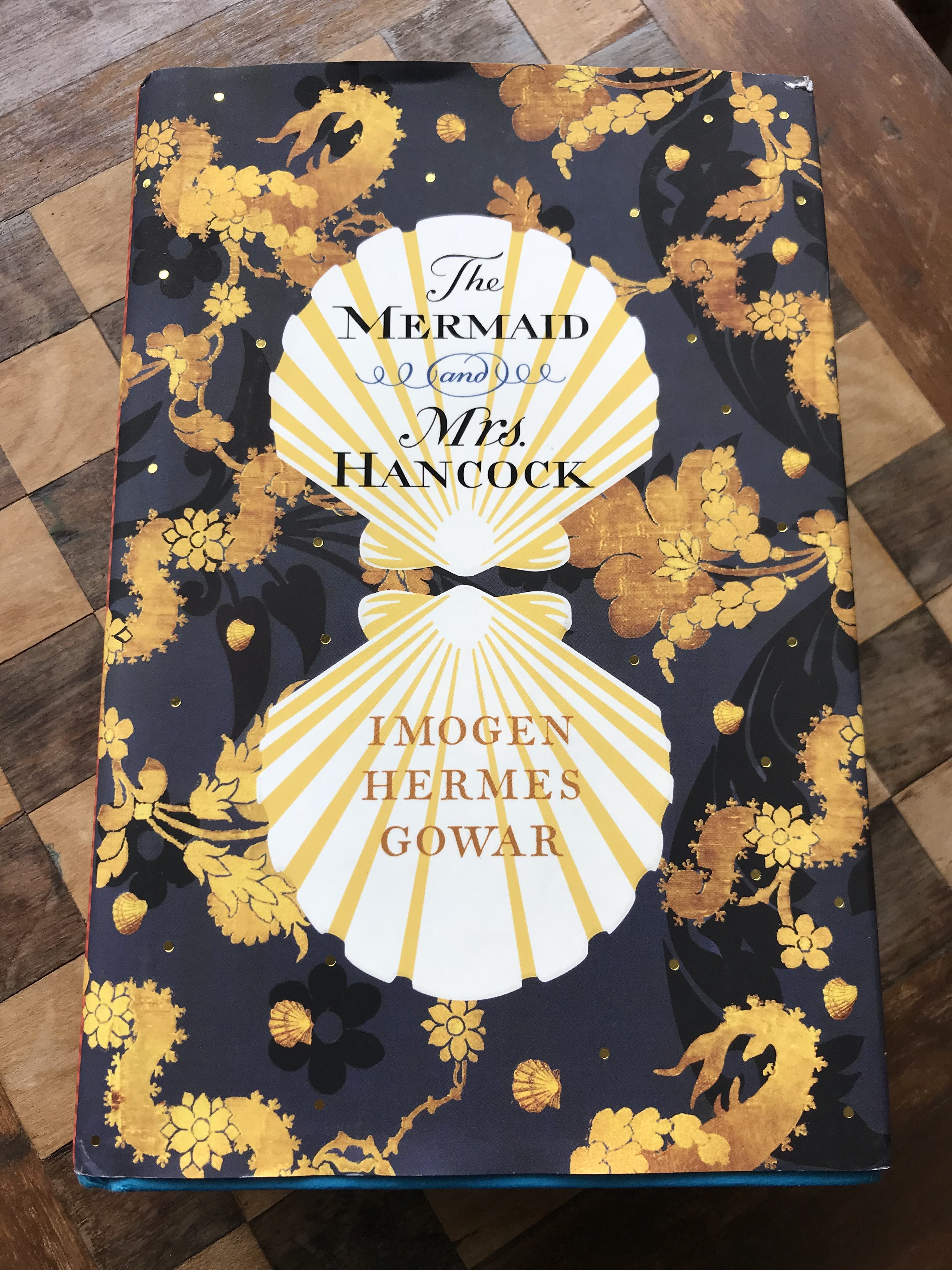 The Mermaid and Mrs. Hancock by Imogen Hermes Gowar is a spellbinding debut that draws the reader into an enchanting world of myth and legend.

The Mermaid and Mrs. Hancock

Jonah Hancock, a merchant who is eagerly awaiting his ship to return would never have thought that a mermaid would change his life. The captain of his ship has sold the ship for a mermaid. This rarity spirals him to fame and fortune. Everyone is eager to see the surreal creature. It opens the doors of high society, and other worlds unknown, to him. His encounter with accomplished courtesan Angelica Neal changes the course of his life forever. The mermaid plays a central role in the story. But, as we all know, mermaids are rumored to bring ill-will and bad-luck. Will his story have a happy ending?

The author tells the story in alternating points-of-view between two worlds: one of the merchant Mr. Hancock and the other of the courtesan Angelica Neal.  If one chapter talks about the former, the other builds the world of the latter. Finally, the two protagonists meet.

From then on the story paces gently towards the end, but not without keeping the reader completely engrossed and wondering as to what would the next turn of events be. After all, mermaids are said to possess destructive powers. Does the myth of the mermaid hold true? Gowar holds the narrative strands of the story well, leading the reader through the intriguing tale.

‘‘Tis the way to tell a story

This is one of those novels where the language adds to the pleasure of reading the story as much as the plot and tension that takes the tale forward.The language is beautiful, sensual and lyrical. The author has a skill in conjuring up worlds! For example, the luscious descriptions of the courtesans house evoke a kind of sensuality. The barrenness of Mr. Hancock’s life is echoed in the descriptions of his home and daily routines. The scenes that describe the melancholy associated with the mermaid, actually weigh the reader down.

One of the very subtle underlying themes is the class and gender inequality that is evident in the Georgian society and almost accepted as normal. These clear distinctions of what men and women are ‘allowed’ were commonplace for the times. For a modern reader, the blatant pigeonholing of gender roles seems surprising.

For example, Mr. Hancock, the merchant, is going to be visiting the whorehouse where his mermaid will be on display. His niece who takes care of his house (since he is a widower) demands to know where he is going. He replies:

‘You are prying’ he says. “Tis not seemly. And what use would the knowledge be to you? My place is out there- he waves his arms across to the window, the dockyard beyond- ‘and yours is in here. I go out, you stay in. I do my duty, you so yours; then tis all harmonious. Do you understand?’.

The delicate situation of women, and how they navigate their roles despite challenging circumstances is also something that comes out in the novel. On one hand, Angelica Neal is the most beautiful courtesan. On the other, her utter financial dependency on her ‘keepers’ seems appalling.

One of the most powerful lines that glaringly shows this situation comes when Angelica is talking to her friend, Bel, who is giving up prostitution and is getting married. Angelica wonders how Bel agreed to marriage.

“I have tried all other kinds of prostitution, why not this? ‘Tis simply the best contract I ever saw drawn up, and it’s terms are for life.’

The novel is set in Georgian England and the author has fleshed out the intricacies of the societal mores of the time quite realistically. With the mermaid in the picture, magical realism also imbues the tale.

The Mermaid and Mrs. Hancock is a story that will keep you guessing till the end, narrated in beautiful lyrical language. Set in Georgian England, it is a realistic portrayal of the era.

Title: The Mermaid and Mrs. Hancock