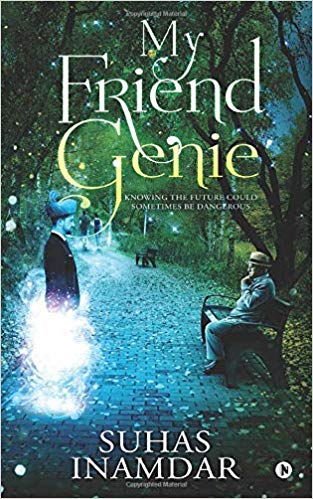 Suhas Inamdar’s latest novel, My Friend Genie is the story of a simple middle-class man and how a magic ring changes his life forever. At the very inception, the book establishes the uneventful and predictable life of Arun Deshpande and his family. They are living a sober and almost mundane existence. However, destiny has something else in store for them, which is sure to change their lives forever. By a twist of fate, Arun ends up buying a ring though which he has access to a Genie who is capable of fulfilling all his wishes.

Now, wouldn’t this be the most ideal situation to be in? The novel attempts to answer this question. Fiction is often a psychological study in itself. The author has brought out the emotions, feelings and challenges that Arun encounters when he actually has all the power a person can wish for! Can the ability to know the future and resolve all problems with an almost divine intervention ever be harmful to a person? What is the fine line between taking help that you need and yet not giving in to greed? Arun is essentially a good hearted person. The novel follows Arun through the entire process of discovering the Genie and his magic. Arun uses the ‘power’ for good, and never lets it corrupt him. But, even with all the good intentions, is it advisable to interfere with destiny?

The twists and turns that occur in the plot increase in the latter half of the book, pacing the action forward, leading towards a very apt climax! Inamdar beautifully fleshes out the simple middle-class mentality and vibes through the characters he has crafted. Of course, Arun takes away a chunk of the novel as the protagonist, but one can really connect with his wife Anita, and the other ancillary characters as well, especiailly Dhananjay Naik from the Police force.

As the events in the story unfold, the book illustrates how sometimes having power can still render you powerless! But it also shows how not having any outside power, does not mean you are powerless! Power to change your destiny has to come from within!

My Friend Genie is Suhas Inamdar’s seventh work of fiction. True to his philosophy of writing books that make a difference to the reader’s life, this one, like all his other books, has a lot that the reader can takeaway. The elements of fantasy that are a very integral part of the narrative, just add to the pleasure of reading My Friend Genie.

K.M. Munshi’s, The Glory of Patan set to enchant readers once more

Turmeric Nation- A Passage Through India’s Tastes by Shylashri Shankar presents the reader with some deep food for thought.