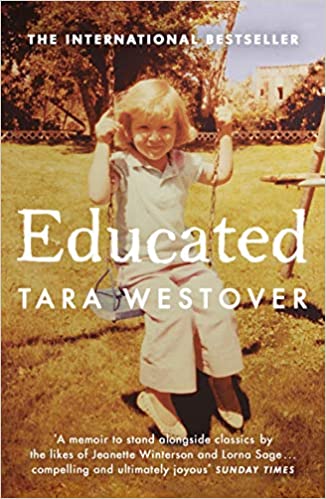 Tara Westover’s memoir Educated has been on the bestseller list for a while, and not without reason. The memoir chronicles her childhood spent in rural Idaho. She lived with her siblings and parents, quite aloof from the influence of society. They were physically distant from modern society, and spent most of their time preparing for the ‘end of days’. Hints of pervasive family influence are at the very genesis of the book.

As we follow the life story of Tara, we journey through her past with her. We understand how a childhood cocooned with the fundamentalist thoughts of her father prevailed over the entire family. We also understand how education and the desire to solicit education changed her life forever. It got her out of the viciousness of her family condition. The book exemplifies the redemptive power of education, and the resilience of the human spirit.

A theme that stood out very starkly for me was the deep and pervasive influence of the family. How does this work in a context where pervasive family influence is the norm? Worse, what happens if this is not necessarily for the best for the members involved? How much should we betray what we have learnt and imbibed as children, to truly reach our optimum best? Where should we draw the line? How can we avoid betraying ourselves, in our unconscious desire not betray our families?

Who tells the story

One of the most startling revelations that comes out in “Educated” is the fact that as children, we often have adults and primary caregivers ‘write’ our narratives and define life for us. Under ‘normal’ circumstances, once the influences of the outside world seep in, through media, peers and school primarily, and once the child thinks for himself or herself, the child’s worldview is shaped by many of these other factors. Most parents also encourage independent thinking and accept differences of opinion.

In Tara’s case however, the family limited interaction with the outside world. Tara’s father mistrusted the education system and hence none of the children were sent to school. The family did not visit doctors or hospitals even when seriously ill, and relied on home remedies purported by their mother. In the book, we see this dysfunctionality through the eyes of the child-Tara. However, we also understand that even in the future, after she ‘comes out’ of the ‘mess’ associated with her childhood, she has that feeling that she should believe what her father believes. The stickiness of childhood experiences continues through adulthood, despite her gaining insight and awareness. She writes, “I believed then- and a part of me will always believe- that my father’s words ought to be my own,”. This statement was an eye-opener for me. It showed me how, even as adults, we subconsciously rely on childhood schemas and beliefs as ‘truth’.

Educated reveals so much about the power of the family, and their hold over the stories that a child, and then the adult tells himself and herself. It is a story about the firm grip that families, especially those who are successful in isolating their children from the ‘outside world’, have over the very thoughts and opinions and therefore, the behavior of their children. But, in such families what happens when the remote control lies in the hands of a head who himself can’t be relied on?

Normalizing abuse – When silence is not golden

Her brother’s constant abuse of her, with actions like dipping her head into the WC when she did anything that displeased him, left a strong mark on her. She yet explained it away and justified his behaviour to herself, not wanting to believe that the problem was with him and not herself. Her mother’s constant ‘explanations’ for her fathers’ behavior and his irrational thoughts is another example in the book that shows how a person tends to cow down under a dominating personality. Her endorsement of him and her refusal to support the children to be independent, plays out the schema of a ‘devoted wife’. Unknowingly, she encouraged the monster in her husband by refusing to go against him. This does not escape the observant Tara who writes, “Mother no longer moderated dad’s statements after he left the room, no longer gave her own opinion. She had been transformed by the miracle- transformed into him”.

But there is redemption

Probably the beauty of life itself is that it offers opportunities for redemption. Tara found her redemption in education, and though estranged from part of the family, she found her peace. She found the courage to share her story, laying bare many deep dark secrets. The reader accompanies Tara through her journey as she grows as a human being and gains confidence. She now sees events for what they are and not as what she wants them to be. “Their voices were forceful, emphatic, absolute. It has never occurred to me that my voice might be as strong as theirs,” she writes. In another revelatory statement she writes, about her elder brother, “he had defined me to myself, and there is no greater power than that”. To me, this statement reveals that Tara was finally ready, albeit with great difficulty, to acknowledge that she had a voice, and it could be different from that of her family.

I believe that we can gain deep insight from her story and apply it to our lives. To some extent or the other, childhood narratives determine our world views. By understanding Tara’s story, on how one can move away from pervasive family influence and the opinions and thoughts of others, especially in our formative years, I think there is a potential to reset our lives. There is hope that we need not necessarily be bound to the past. We need not be bound to narratives that belong to strong family members, who may have an influence on us. We can have own stories, even as we respect the views and thoughts of others. This is a book that will start you off on that journey of viewing your life in the context of your past.

All families have skeletons in the closet. The problem begins when these become monsters waiting to unleash trouble. I would urge the reader of this book to give a thought to the possibilities abound when we step outside the boundaries set by others’ narratives! I would also urge them to look at narratives written for them by others….and ensure that in the process of not betraying their loved ones, they don’t end up betraying themselves. That is, in my opinion, being Educated!