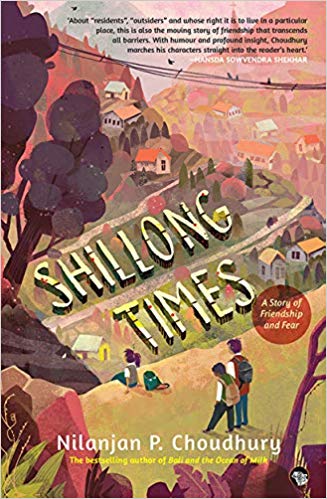 The questions of identity and of belonging have plagued humanity for time immemorial. These questions have never been asked so verdantly before, as they are today. Though set in the Shillong of 1980’s, Nilanjan Choudhury’s novel, Shillong Times evokes many of these questions, the answers to which still remain elusive.

The story is set in Shillong. The protagonist, Debu, aka Debojit, is the only son of the Dutta’s. His father owns a pharmaceutical shop in the town, while his mother, a housewife has the sole mission of turning her young lad into a fine young man with a good government job, preferably in Calcutta! While his parents still reel under the hangover of the bitter ancestral memories of exile from Bangladesh, they want to provide a normal childhood to their only child.

Their often humorous attempts at giving him a cultured upbringing lead to plenty of funny situations in the book that unfailingly bring a smile to the face. His mother’s attempts to protect her ‘half-child half- man’ from the big bad world of adolescence contrasts with Debu’s desire to enjoy life and friendship with his mates Clint and Audrey.

Life has a funny way of contriving intersections with people. Debu joins a math class and little does he know that Clint Eastwood, a not-so-good student in that class, would be associated with him and change his life forever. Well, Clint introduces him to forbidden pleasures and also to Audrey Pariat, the most beautiful girl in town.

There is a lot of humour deftly woven into the book. It also evokes the character of Shillong as a beautiful sleepy small town, untouched yet by modernity and urbanism. There are some moments that bring out feelings of nostalgia- like when Debu’s house gets a television set for the time time ever. The setting in the disconnected world of yesteryear’s compared to the highly hyper connected society of today, is like a breath of fresh air.

“Seven years after Meghalaya had been awarded full statehood, Shillong was to erupt in an outpouring of violence that would scar the town beyond all recognition. The bloodshed and hatred that followed would resurrect the traumatic memories of partition in the minds of many Bengalis. But they were to give it a misleadingly innocuous name- Gulmaal,”

The simmering tensions between the Bengalis of Shillong and the local Khasi community form the crux of the book. What adds to it is that Clint and Audrey are both Khasis, and Debu, a Bengali. Will friendship withstand these tensions? Is anyone an insider or outsider when it comes to friendship? Will the communal tensions test the limits of the bond between friends?

The tale examines how hatred cuts deep, and how organised groups worsen already bad affairs. As Debu’s father says in the novel, “Things will start going from bad to worse now. I hear things, I see things that I didn’t earlier. I can feel the hate stirring, rising. Like it did in ‘79. By this time, it will be different. Last time, it was spontaneous. This time it will be more organised, it will go on for longer, it will cut deeper,”

The issue of ethnic tensions pervade the book, but so does a different sub-theme- life in small town India. Debu’s mother has ambitions for him. Her character and her hopes and dreams for him evokes a commonly prevalent attitude of small-towners looking for bigger opportunities in cities. That Debu would have to look for greener pastures when he came of age is also aptly indicated, thereby underscoring the theme of migration, albeit of a different type.

“He knew that one day he would have to leave the hills and travel to the plains in search of employment. He would have to undertake the same journey that his grandfather had made nearly half a century ago, but in the opposite direction “

The issues of identity that are explored in the novel interact with a coming of age tale. How do children and young adults address this issue? How is their response different from the adults who are more prone to biases? Debu’s mother tells him in the novel, “You May have forgotten about those times. But we adults are not that lucky. There are so many things that happened then which we can’t forget, no matter how hard we try,”

In the book the lives of the three friends are deeply impacted by the violent scenario that pervades their hometown. But, they rise to the demands of the times and do what they perceive is right. The deftly woven story touches the chords of the heart when it shows that despite violence and hatred, love and friendship still create magic!

This book review is a part of The Readers Cosmos Book Review Program and Blog Tours. For details check: http://www.thereaderscosmos.com/

A ‘mantoness’ of being- Why Manto is relevant today, more than ever before

Here are 10 iconic novels to read…..start off with your classical reading adventure!