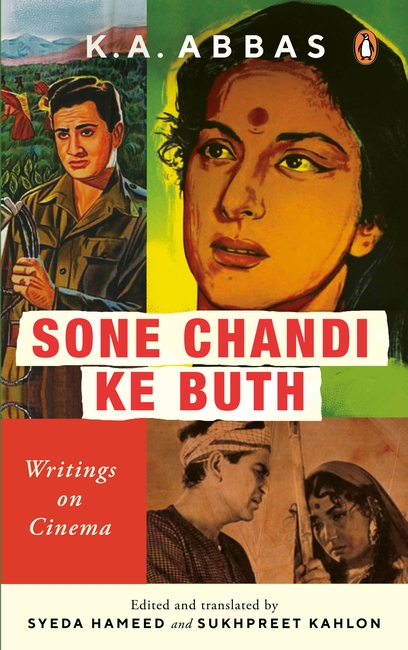 If you are an avid reader of film reviews and writings on cinema, you may feel that’s it’s been a while since you’ve read a review or article that is truly authentic in its appreciation or criticism of a movie or its actors. It is rarer to come across a critic who is actually so well acquainted with the nuts and bolts of all aspects of filmmaking, that he is in himself a natural authority in writing about cinema. Such is the feeling one garners on reading Khwaja Ahmed Abbas’ Sone Chandi Ke Buth (Penguin India). This book is a collection of writings on cinema from one of the pioneering film-makers in the country. The translation has been edited and translated from Urdu by Syeda Hameed and Sukhpreet Kahlon.

As the reader unfurls the pages of the book, they find observations, thoughts and reflections on the glamourous and not-so-glamorous sides of Indian cinema. Abbas’s writings take the reader behind the scenes, revealing the lives of the people on the silver screen. There is deep psychological insight into the film personalities he talks about. These include his candid observations on famous actors, writers and directors such as Raj Kapoor, Amitabh Bachchan, Dilip Kumar, Satyajit Ray, Meena Kumari, Balraj Sahni and V. Shantaram. Many of them he knew closely at varied levels. His sharp and honest insight into their works is something that is so rare in cinema writing today.

I particularly enjoyed the essay on Amitabh Bachchan, and it was a revelation to me, that it was Abbas who introduced Bachchan to Bollywood in the first place! His piece of Raj Kapoor is also honest, giving credit where it is due to the great superstar and his immense hard work, and yet, having observed Raj Kapoor since he was a child, Abbas has also commented on the actor’s transformation. As he writes, in the beginning of the essay on Raj Kapoor, “In those days, Raj was quite down to earth, with no vanity”, giving the reader an authentic glimpse into Kapoor’s evolution.

The articles offer remarkable insight on the beginnings of film criticism in the country. He dissects the craft of performance like a pro. The matter-of-fact style and simple direct words are able to touch every reader, even someone who is a novice. His sharp observations on the technical aspects of cinema are also gently woven into the writing. There is a hint of a didactive element as well, since he believed that cinema had a bigger social purpose. He truly saw cinema as a vehicle of social change and that is why perhaps each of his essays, articles or stories look at a film or a star from a more holistic lens.

This volume includes a section of his writings as a film journalist for the Bombay Chronicle in the late 1930s and early 1940s. His column, ‘The Last Page’, one of the longest-running in Indian journalism, began in 1935, and moved to the Blitz after the Chronicle’s closure, where it continued until his death in 1987. Their inclusion in Sone Chandi Ke Buth is invaluable for cinema lovers.

The original Urdu is now before the world in its English translation, thanks to the efforts of Syeda Hameed and Sukhpreet Kahlon. Khwaja Ahmed Abbas’ Sone Chandi Ke Buth rekindles the enigma of authentic writing on Indian cinema, straight from the heart!

The Legend of Virinara by Usha Alexander: A parable of our times…set in the past

Are you ready to be taken over by The Sound of Silence?