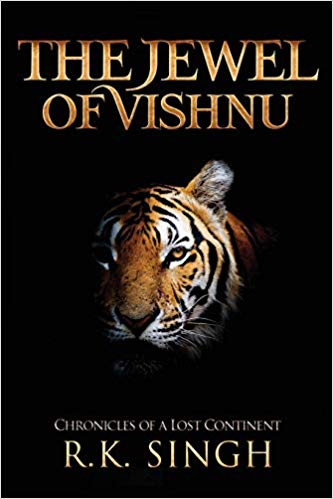 Do you believe that there could be lost continents ?  Does the thought of an ancient advanced culture excite you ? Is your imagination wild enough to accept telepathic conversations between an animal and human ? If your answers are ‘yes, yes and yes’, it is imperative for you to read RK Singh’s The Jewel Of Vishnu. What makes it even more exciting is that this is the first book of a trilogy. Well, for fantasy fiction readers, this is a must-read!

The Jewel of Vishnu is based on the lost continent of Kumari Kandam to the South of India. The story is set in 6000 BCE and speaks of an advanced culture even before that era.

The protagonist, Arul, is a simple teen, living in the small town of Sailem. He lives with his father who is a forester and does not know anything about his mother other than she left suddenly when he was an infant. His village is threatened by animals coming down from the mountains and forests -something that has never happened before in his lifetime.

Along with his loyal friends, the bold Navira and the timid Keeran, he sets off on an adventure to find out the cause for this and stop it in a bid to save his village. The other characters like, Ori, Arul’s father, the children’s Guru Pari, Kapilan, the village villian and others add tremendously to the narrative.

In a land on the edge of ancient India, a mysterious boy searches for his mother and save his village from starvation.….

Will Arul save his village and find his mother ? After all, he does carry her magical amulet supposedly forged by a God. These questions make us itch to have the second and third books of the trilogy in our hands. The enchanting magical stones, extinct creatures, a volcano, royal soldiers, beautifully written scenary already have us hypnotized hook, line and sinker !

The adversaries they face along the way, animal and human, and adventures they have in traveling across unknown paths makes this book truly “unputdownable”! Kudos to the author for setting the book in an era that is not easy to imagine and maintaining a perfect balance between a grounded simple life and wonderfully imaginative magic. It truly casts a spell on the reader! The Jewel of Vishnu does take us back into a lost continent, and happily so!