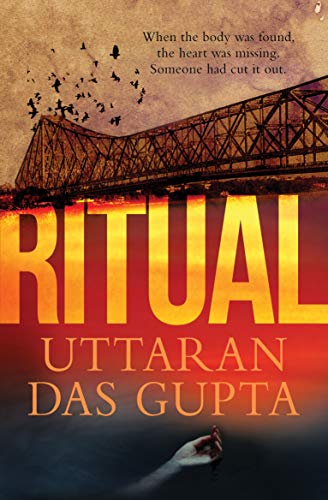 Indian cities are contemporary and superstitious practices are a think of the distant past….right? WRONG. Uttaran Das Gupta in his debut novel, Ritual, forces one to rethink this notion and whether the mental attitude of people has kept pace with the evolving times!

Calcutta, thriller, detective: reminds you of the classic Byomkesh Bakshi series? This time it is Ritual, a ‘whodunit’ based in Calcutta, the debut novel of journalist and writer Uttaran Das Gupta (published by Pan Macmillam India). It airs the dirty laundry of the sordid underbelly of the ‘City of Joy’.

Young murdered girls, with their hearts cut out of their chests, start turning up all over Calcutta city – It is not yet Kolkata as the period is the late 1980s. An ACP and his deputy are assigned the case but nothing is as it seems. At the same time, the Vasant Sena, a spiritual organization, emerges as a force to be reckoned with. Headed by the charismatic Yogi Premananda, the fanatic followers are ready to kill or die for their cause and Guru. Throw in a foreign journalist, extra marital affairs, sexually deviant behaviors, tantric practices, some police gone rogue and you have all the basic masala for an entertaining tale.

Despite all this, Ritual fails to grip completely. The characters are ill-defined, the plot is weak and the writing archaic. Some shocking incidents are forcibly made a part of the book. The end does not justify many events and veteran readers would almost be rolling their eyes at the twists which are predictable. It seems as if the writer was in a hurry to finish the book.

The saving grace of the book is the colourful description of Calcutta and the audacious topic that the writer has taken on for his first novel. But yet, there is enough here to make the reader look forward to the next book from the writer!

The Dry Fasting Miracle by Luke Coutinho will help you discover if the dry fasting lifestyle is indeed for you.