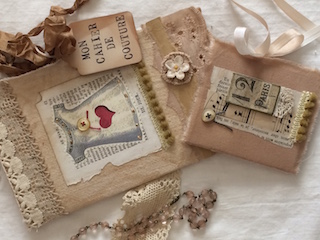 For the love of paper!

Anna Corba, alumnus of Academy of Art in San Francisco, California, and founder of the “Found Cat Studio” has been working with paper in exceptionally creative ways.Those of us who love books, also have an unspoken attraction to paper. Paper is magic, not only in the words it can hold, but also in the myriad creative expressions it can be used it.

Bookedforlife has a chat with Anna about the magic of paper…

In your book, “Vintage Paper Crafts”, you speak about one of your first treasures- a watermarked ledger with beautiful handwriting. What is it that pulled you to this creative field?

For reasons unknown, I find it essential on any given day to work with my hands, creating something beautiful to look at by the end of the day.  I believe this is a way for me to make sense of simply being in the world.  I like long stretches of quiet, alone time and the meditative quality of creative endeavor appeals to me.  Losing myself in a project this way not only soothes my senses, but also occasionally allows me to touch an energy that is greater than myself, as though I am channeling creativity as opposed to ‘efforting’ my way through.

When I first saw the ledger book, I was drawn to its tactile quality…. I could turn the pages and hold it in my arms; it exuded a sense of humanity and intimacy that drew me in.  I began my creative life as a painter, but through the years began to add torn papers onto the canvas to create interest and texture; once this began, I never turned back.

What kinds of books and paper do you gravitate towards?

I gravitate towards vintage, worn, yellowed, stained and tattered papers.  I like margins that have been written in and end pages that people have doodled in with pencil or carefully autographed for safe keeping.  I steer away from anything with a sheen or overly bright colours.  I like books that have been muted with use and time; I always go for the ones that whisper instead of shout.

I love vintage foreign postcards, especially with the sentimental notes in evidence and cancelled postage stamps.  I am always on the lookout for ledger books that show accountings of rooms to let, eggs being sold or lace being measured.  I also love volumes of sheet music, the older the better…I simply like the graphic quality of musical notes running up and down a page.

You prefer books in foreign languages, especially French. What draws you to these?

I like books from France, as I have a petite knowledge of the language, which I find beautiful in itself.  Yet the language is also just enough of a mystery to me, that I can appreciate the books simply for their visual quality, and not get lost in interpreting the story.  When I work with these books I get to practice my French skills just enough, but not too much!  I am a true romantic, so I often veer towards poetry not only for the phrasing, but the fact that that a poem can have a certain shape on the page which is appealing in itself.

What are some of your favourite techniques to work on paper? In “Vintage Paper Crafts”, you mention working with stripped paper and tea dye…

I also like rubber stamping over text or doing simple watercolors or pen and ink sketches.  Being able to see through the compositions to the words in the background can create a very compelling piece.  Anything that mixes two or anything that mixes two or more mediums together will garner interest due to added texture and intrigue.  I also like simply rolling beautiful pages into individual ‘tubes’, tying them with lovely ribbon and placing a dozen upright in a vase or clear jar like a bouquet of flowers.

You also hold creative workshops, where you meet other likeminded people. Based on your observations and experiences so far, what do you think explains this fascinating relationship that people have with books, papers and texts in their physical form?

I believe that at the end of the day, in spite of all the technology available to us, we are sentient beings and as such, we respond to and crave the natural world in an elemental way.  We want to touch that which is real, that which has been carved from the forest, that which carries a handprint, not just a manipulation of wires and computations.  Paper is of the earth.  Books hold a history of being revered for their ability to carry the written word in a fashion that bears an imprint, physically, on the paper itself.   Handwriting whether it is from a child or a monk bending over his candle, illuminating sacred text, is a conduit of the human spirit, magical in its way.  When we scour a flea market and are drawn to the ledger books from the 18th century we are bearing witness to an art form that has stood the test of time, not just been whisked off into a cloud of obscure memory.  Technologists could make handsome arguments against anything I am claiming, but for me, that which we can hold and turn over in our laps, reach for on a shelf to lend to a friend, or pore over as we take an afternoon break, will always trump a computer screen that remains mute and hard and backlit to lure us in.  A book need only rely on its humble weight to compete.

I find that when a group of people gather that have similar instincts, a collective energy is formed that is nurturing, fascinating and inspiring to be a part of.  It is like that saying that says the collective sum is always more than the individual parts.  Most participants leave a workshop feeling a deeper sense of themselves for having connected with like-minded souls; this is a wonderful arena to help facilitate and be a part of.

Anna Corba has surely found the magic that lies in old forgotten paper!

A selection of beautiful vintage paper on Amazon

Getting delightfully boxed-in with OriOri kids- sharing our “sleepbox” adventures