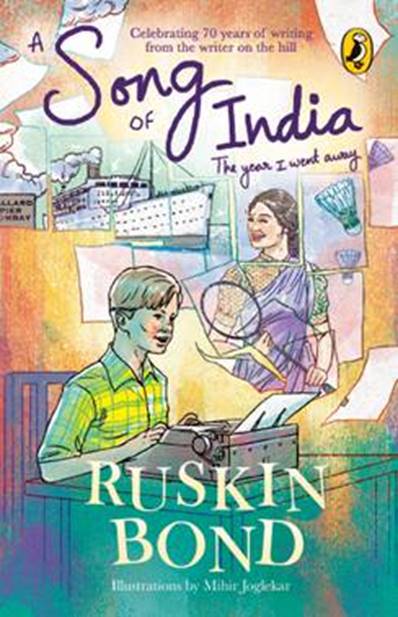 Ruskin Bond clearly occupies a very special place in the hearts of Indian readers. If you are an avid Bond fan, you would know that his work draws more from his life than most other writers you may have read. In a series of really special memoirs, he gently tells the story of his life, capturing an era gone by. Looking for the Rainbow was the first memoir, followed by Till the Clouds Roll By and then Coming Round the Mountain. All three captivated readers, young and old alike. With the trademark simplicity, injected with doses of humour, A Song of India- The Year I went Away by Ruskin Bond, the fourth instalment of the series continues to weave magic. It is published by Puffin books. The beautiful illustrations by Mihir Joglekar sync well with Bond’s narrative.

The events in the book show Ruskin as a young 16-year-old. There is something very special about turning sixteen. Of course, sweet sixteen, marks the transition from being a teenager to being more of an adult. It also means the end of school and for the young Ruskin Bond it clearly meant no school forever. Moreover, he was going to England. Having dreamt of becoming a writer, the land of Dickens and Shakespeare would surely beckon!

Ruskin was always sure of the fact that he wanted to be a writer. He describes his life in Dehradun, where he lived with his mother and step-father, and the dreams of becoming a writer, that were unfortunately not taken so seriously by those around him. Thus, he spoke about the dream no longer, but nurtured it in his heart, quite gently and lovingly!

I love the evocation of the life of a teenager in pre-internet era. How he strolled about walking in town, how he went alone to the cinema, borrowed books from a library at a sum of 2 rupees a month, playing badminton with his first crush, her making parathas for him….…all these and many more such instances conjure up the life of a boy in an era that may be alien to children and young adults today. Filled with simple pleasures and simple activities that fill young residents of a small town, this book paints a vivid picture of an era where life was simpler!

This story also describes his initial foray into writing and how this passion gave him the first taste of financial independence. His characteristic simplicity and humour shines brightly through the pages. Sometimes it lies in the gentle language, and sometimes in the innocent situations. The illustrations are absolutely gorgeous! It is a keepsake book and you must get all of the series!

If you have been an avid reader of Ruskin Bond’s stories you would know that his first novel, which also won accolades, was titled “The Room on the Roof”. This book describes how he came to get a ‘room on the roof’, a sense of privacy finally, where he got his own private space to live and write. In a sense, this is the raw material that provides a hint of what his very first book would be like!

A Song of India is an autobiographical story filled with his trademark wit and humour. It will elicit smiles…maybe a tear or so, but always a warm feeling.

MinMini Reads: A Time for Ebby by Poile Sengupta

Immerse Yourself in the Enchanting Tale of The Magic Cup