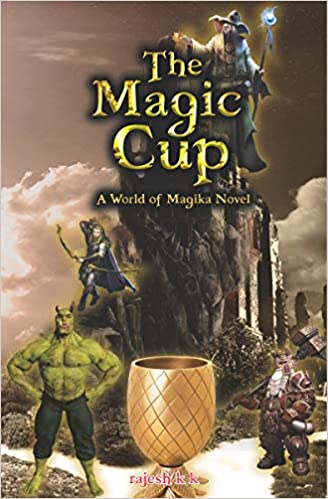 Fantasy books are a great way to escape from the humdrum routine of one’s life. They transport the reader into an alternate reality where normal rules don’t apply and there are endless possibilities. It is perhaps this illusion that attracts young readers to the fantasy genre as it elevates their regular lives, making them believe that life can actually be as exciting as you imagine it to be.

Rajesh K K, author of The Magic Cup does a great job of creating the whimsical world of Magika which forms the central plot of this book. Four friends, based out of Bengaluru mysteriously find themselves in the fictional world of Magika to help find a Magic Cup stolen by an evil sorcerer called the Dark One. As their only option to return home, the friends agree to embark on this dangerous quest.

The book paints a descriptive picture of the land of Magika as trolls, dwarves and elves make delightful appearances adding another element of whimsy. The story takes the reader to the Damned Lands giving the book a dark and morbid undertone thus perfectly capturing the evil villain The Dark One. The challenges that the four friends face, the attacks by strange creatures, the uncertainty of their safety and ultimately the showdown with the Dark One all make for a thrilling read.

Published by Story Mirror, The Magic Cup is author Rajesh KK’s first book. While he has been writing short stories for children since the past 15 years, this is his first full length novel. The world he creates through his words is both imaginative as well as immersive. Readers of all ages will delight in the enchanting story of The Magic Cup that will keep them gripped until the end.

Smash It, Butterfingers by Khyrunnisa A

How to Be a Writer by Ruskin Bond