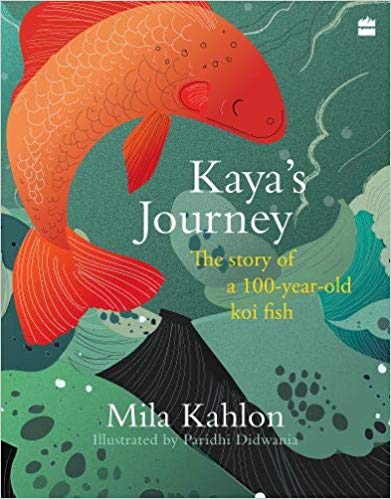 What is it that fires up an author’s imagination? The itch to write a story….maybe from an idea that they may have heard of, a theory they may read about or maybe an image that has left a lasting imprint in their mind. This gets them going to give birth to a riveting story. Add to that tons of research, work on beliefs, folktales and legends, they start their journey of putting pen to paper. And that is just what must have happened to author Mila Kahlon.

One day she chanced upon a mesmerizing Chinese koi fish….a fish with a bright sparkling gold colour and with a tattoo of a dragon. She saw the fish in the unlikeliest of places, in a pond at a farm near Toronto, Canada. This prompted her to write ‘Kaya’s Journey’ for children. Kaya’s Journey- The story of a 100-year-old koi fish has been published by HarperCollins Children’s Books.

“Wake up sleepy children. I will win our bet and you will have to roast marsh mellows for me” called out Yogi Grandpa from outside the twins Avani and Niam’s room.

Avani opened her eyes to see that spring was finally here, the strong sun shone on her face and she could hear droplets of melting snow falling from the rooftop. Being the weekend, she was excited, with no school and time to make new adventures. And Avani could not let grandpa Yogi win the bet of who would chance upon the captivating koi fish Kaya first. She quickly woke Niam, her brother they raced out in their night clothes to a small lake in the middle of their property.

Little Avani with her family lived in Canada and today they were on the lookout for Kaya who would perhaps show herself now that the snow was melting.  Now that spring was here, finally Kaya did show her golden shimmering self and the children went mad with happiness and requested grandpa Yogi for her special story.

Kaya, a pretty carp fish lived a happy and safe life in her haven with her family and many siblings in a pond in China. All of them were of a different scintillating colour of orange, red, blue, black. Kaya and her sisters had red and pink spots. But Kaya wanted more from her life. This was not enough.  Kaya wanted to travel and see the world.

Well, ‘Where there’s a will, there’s a way’. Her persistence paid and she started her journey with many of her siblings to leave her pond and swim across the river. However, many of them returned home when the going got tough. However, Kaya showed tenacity and fierce will power for many years, travelling far and wide facing difficulties along her path. With her steadfast determination and perseverance, she paved the way for herself and travelled across the continent. In fact, she also had the gods placing bets if she would complete her journey! In respect, the gods changed the name of the species from ‘carp’ to ‘koi’ fish. .

Right from escaping predators in water and a chopping board in Japan, to living in the emperor’s moat to living in Canada on a small lake- Kaya did it all. And if you want to know all about her life, dreams and travels do read the fascinating book of ‘Kaya’s Journey’ by Mila Kahlon and be lost in an array of colourful and attractive illustrations by Paridhi Didwania. Her art enhances the story and is a visual delight for children.

At the end of the book you will find a few fascinating facts as to why the koi fish are so special. The reader will understand the significance attached to these beautiful creatures and the symbolism associated with them. While these bits are quite intriguing in themselves, the overarching message that Mila Kahlon gives to children is that no matter how small or big they may be, their dreams matter! Kaya’s Journey- The story of a 100- year- old koi fish is an inspirational and fun filled read for young children (age 4+)

Sadiq wants to stitch by Mamta Nainy: A book that defies gender norms through a simply told story