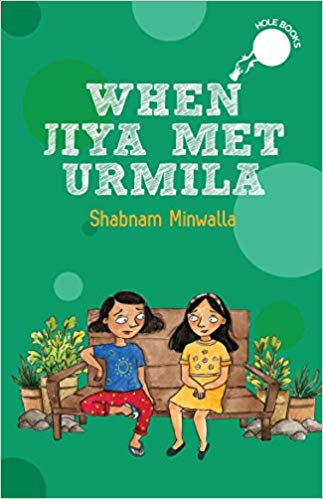 When Jiya met Urmila by Shabnam Minwalla is a ‘hOle’ book. This very popular version of the paperback by Duckbill Books has younger readers quite enthralled by the appearance of ‘the book with a hole!’.

Moving on to the story… Jiya and Urmila who “grew up just two Banyan trees and one wall away from each other” are as different as chalk and cheese.  The story is about circumstances that bring them together for a common cause. The first chapter establishes the difference between the lives of the two girls. These differences, which basically stem out of social class differences, are brought out beautifully by Minwalla in tightly packed but simple and impactful sentences.

Jiya met Urmila in the most unusual circumstances. Their paths would never have crossed had it not been for Jiya’s school project. However, fate gets them together. But, can such a (supposedly) unlikely friendship survive? The first impressions that both Jiya and Urmila have about each other are not positive. Jiya feels that Urmila is loud and wears very bright clothes. Urmila feels that Jiya has no spunk and her dress is very dull. Would they get over these petty differences and work towards a common goal- that of the downfall of Mr. Jajoo?

The story is filled with subtle humour. Minwalla creates a world that shows an inherent understanding of the psyche of children. The climax is extremely funny and will be quite entertaining to younger readers.

In the book an underlying theme concerns social differences. Minwalla has touched upon this very sensitively without sounding preachy. It must have been challenging as a writer to balance between the story and this theme which is also central to the narrative.

“I started writing this book and only then realised how segregated the lives of children have become. It was incredibly difficult, and I almost gave up on the book a couple of times. But, it was something that pushed me out of my comfort zone and engage with the other. I wanted to mention the fears and resentment on both sides. To do that without sounding preachy or journalistic was difficult. But, Anushka Ravishankar also helped me a lot and nudged me in the right direction! I hope in a small way this book helps break barriers and helps children realise that these barriers are often ridiculous,” says author Shabnam Minwalla, when contacted by Bookedforlife.

The illustrations by Tanvi Bhat add to the entire experience of reading the book and complement the text well.

This book subtly takes on the theme of social differences, without being preachy or obvious about it. But, it is also a very humorous story that will provide great entertainment. When Jiya met Urmila by Shabnam Minwalla is an apt book for younger readers. It is a chapter book, and hence a good way to introduce the concept of chapter books to younger readers.

Mini Masters: Does your toddler know about Van Gogh?

Get off that Camel by A.H. Benjamin- a delightful picture book for young children