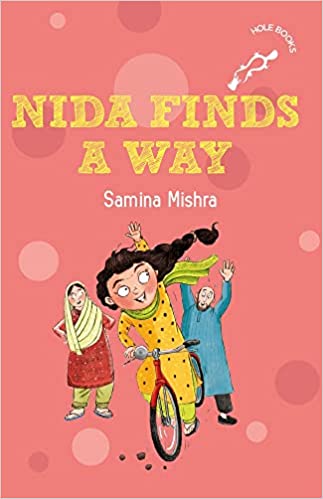 Young Nida, a bubbly girl of seven, is our protagonist in Nida Finds a Way by Samina Mishra (Duckbill/Penguin Random House, 2021). She lives with her family at Abdul Fazal Enclave in Delhi. She likes to try out new things, making new adventures. But Nida’s Abba fears for her, the apple of his eyes. He fears that something bad will happen to her. He is not called Abba the Worrier for nothing.

Whenever he worries about Nida, he loses control, his body quivering, his eyes going round as pooris, his beard twitching. Amma and Dadi are always baffled at Abba’s strange behaviour. This time round Nida wants to learn how to ride a bicycle. This too is worrisome for Abba and he forbids her with a big NONONO, his most favourite word.

But Nida’s motto is that when there’s so much to do in the world, why not start doing things?  One day she sees an old blue cycle on her neighbour Salman’s terrace. She is excited that finally, she can learn cycling. But how? What about Abba? She needs a plan, something that she is anyways good at.

Taking the help of Simeen Baji, Salma’s older sister a plan is set in motion. Will Nida succeed in learning how to cycle? The  next few days at home, neighbourhood and at school there’s a slight tension in the air. Nida hears whispers of words that sound like protest/portest/prowtess and azaadi….words that are new to Nida.

People comprising of mainly women and youngsters of the vicinities walk around the neighbourhood, leading peaceful protests. Nida is curious to know why they have banners and placards with them? Why are people chanting slogans and giving speeches to crowds of people? She too wants to go to the protest site but what will worrisome Abba say when he finds out? Will Abba’s NONONO turn to YESYESYES?

A sweet story of bonding between a young Nida and her Abba. Nida’s exciting curiosity and need to strive for something new and enjoy herself. I felt a strong familial connect to Samina’s story. Most fathers are caring towards their daughters young and old, protective and scared of anything untoward happening. Samina sensitively throws light on the Shaheen Bagh peace marches and protests. The black and white illustrations by Priya Kuriyan sensitively depict and rightly interpret the text.