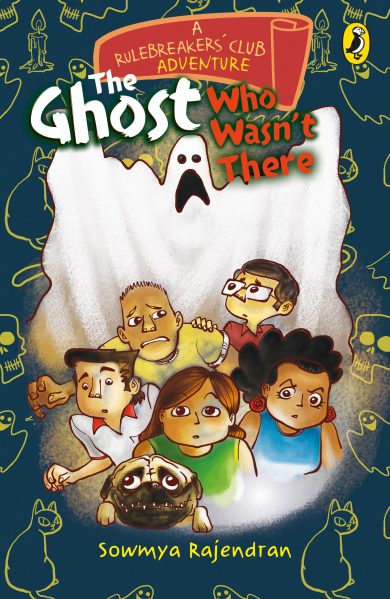 The Rulebreakers’ Club….by Sowmya Rajendran is a series for young readers that promises complete literary entertainment. The primary characters are five brave children…Three boys, two girls and yes, one dog! While five children and a dog may ring a familiar bell to all those who’ve spent a childhood reading Enid Blyton, let’s say here is where the similarity ends!
The books have a generous dose of humour and that remains one of the key strengths. The humour comes out wickedly through the language. Take this for instance,
Spike had come into his life a few months ago and had refused to leave, like body odour.
Or
He was only promoted from one class to another because his grandfather, Shri Vyasaprasad, had been one of the founders of his school, Sri Vidya Bhavan. He had died even before Jagganathan was born, but, like Abhishek Bachchan, jagganathan was forced to endure unfair comparison every day of this life.
Indeed, Rajendran uses sarcasm as a popular tool and this is great since it does not undermine the ability of young readers and helps them enjoy the books at a different level. At all other times situational comedy in the series of unfolding events make the book a hilarious page turner.

Two books from the The Rulebreakers’ Club are here this May to be a summer-reading companion.

In The Dog Who Wanted More, The Rulebreakers’ Club has just been formed. But, they are a gang of five…without a dog! Well, they are the Rulebreakers and since gangs without dogs are just not cool, they decide to steal a pug named Spike. Spike has his own plans though, and is by no means an easy dog to reckon with. What’s more, he leads them to uncover a terrorist operation! Read on to see how they handle Spike (and the challenges that come with him such as his unsatiable appetite and habit of pooping constantly).

In the second book, The Ghost Who Wasn’t There, the five children are still stuck with Spike and just can’t seem to get rid of him. There is one way, and it involves the following: catch a ghost, rob a bank and save the world. How would The Rulebreakers’ Club pull of this feat? To make things worse, Spike makes a new friend in Subramaniam the accountant and finds an admirer in Prasanna, the world’s greatest bore, and is constantly at war with his arch-enemy, Kunti Devi the pissed-off cat. Well, you’ll have to read to know how they finally manage to sort things out (or do they?)!

Urban Indian youngsters are a special group in themselves and the five child protagonists mirror realistically the language and appearances of this unique readership. This is heartening indeed as is the fact that the book does not fall back on any cliches, especially related to gender! (For example, the two girls in the book, Monica and Keerti reflect the young girls of today, who are intelligent, brave and individualistic in their own right). The boys, Tejas, Rishi, and Jagannathan have their own idiosyncrasies as well. The interactions between the five are fun and interesting, taking the story forward in a humorous manner.

The formula of “secret clubs” formed by kids who then go on to have adventures may not be new, but Rajendran gives it a fresh and unique spin. The result is two hilarious adventure stories that will have young readers in splits even as they try and guess what happens next.

Look, Learn, Do- An interactive book about Indian artists by Purnima Sampat

Birds in my Garden and Beyond by Bulbul Sharma