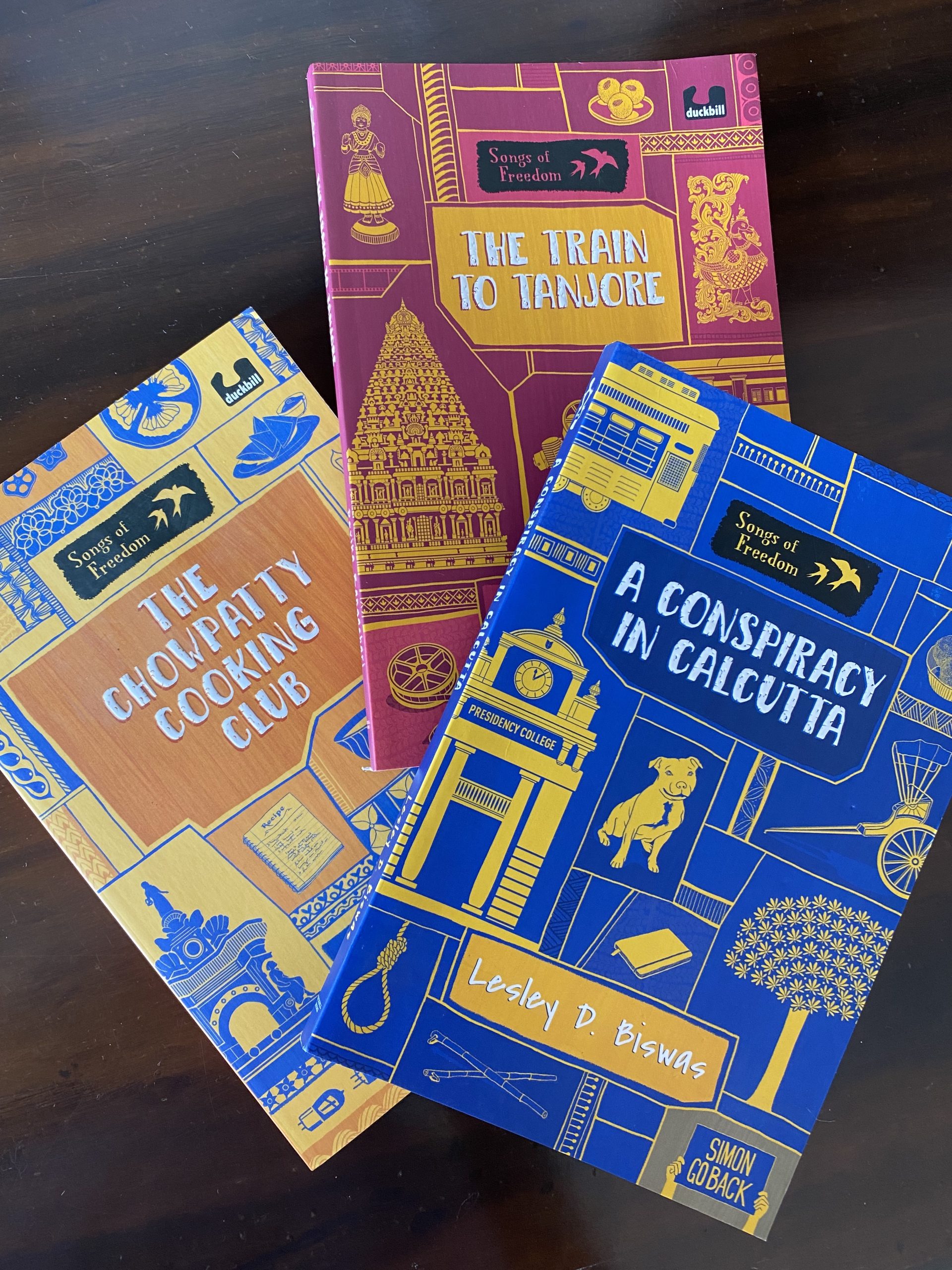 Stories of the freedom struggle, of independence and of the immense sacrifices made by common people are known and popular. However, the Songs of Freedom Series (Duckbill, Penguin) takes these milestone events at a different scale. This series of novels takes young children and put them at the heart of a historical event. And then the reader experiences a very personal view of a momentous event.

It is not easy to reimagine history and still be authentic to its core. But, the Songs of Freedom Series give us a chance to relive emotions and sentiments that have been an integral part of our history. For instance, A Conspiracy in Calcutta by Lesley D Biswas takes us back to 1928. Through the eyes of the 10-year-old protagonist Bithi, we observe first-hand the lived experience of injustice. For Bithi, who wants to join the freedom struggle just like her grandfather, there is injustice at multiple levels. As a girl-child, even her going to school is looked down upon! Her best friend, who is her age, is to be married! Under these socially oppressive conditions, there is further oppression by the British.

But Bithi is a force to reckon with. Inspired by her grandfather’s participation in the protests, she stands up against police oppression and often gets into violent situation! But grit and determination lie at the core. The transformation of the feisty girl into an unafraid individual who has the inner agency to stand up and fight is a heartening tale!

The Train to Tanjore by Devika Rangachari takes the reader on a trip to Tanjore in the year 1942. The overarching event is the Quit India movement. This is witnessed through the eyes of little Thambi. His father introduces him to the newspaper, which they read quietly in the library. This is an entry into the world of grownups. And then comes more. There are leaflets that publish information that newspapers cannot publish. And these are the bits that matter. Thambi’s initiation into this world marks a change in his life. His mind and thoughts take on a new scale and he is inspired by the idea of a free India. But this is a task that demands great sacrifice. Is Thambi willing to do what is takes? Even if he is, does he have the plain courage to do so?

The Chowpatty Cooking Club by Lubaina Bandukwala is set in the versatile and ever bustling Bombay. The action follows Sakina and her friends, Zenobia and Mehul as they are introduced to revolution. On the surface they are but young children living in a city. Their mothers run a cooking club. But something more is cooking and brewing. Under the seething flames of revolution, the children find a world of ideas through the radio broadcasts. It seems that the whole city is a part of this revolution in its own small way. Watch how everything ties up together!

The Songs of Freedom Series place young children at the center of the struggle for India’s independence. At one level, there is the story of the struggle for independence playing out on the wider canvas. But, parallelly, and equally importantly are young minds coming of age in a world where they are about to make a big difference.

Different stories explore slices of events that are well-known historical milestones. The difference is that these events are now looked at through the eyes of a child participating in them. The series is targeted at the 10-plus age group. For children born in free-India, these stories seem to belong to another world. And yet, these are remnants of a past that has shaped all of us. Reading these books will give a worldview of the struggles for independence under an oppressive regime. The books give a glance into our past through the eyes of children. It fosters empathy in readers as they become aware of the range of emotions and struggles experienced by other children in their past. The series also looks at the powerful role that children can play in shaping the destiny of a country. How young minds can foster courage and indeed set a tone for a better world! The Songs of Freedom Series is one to keep and cherish as an integral part of your home library!

Raising Mamma by Lalita Iyer, a simple book about the spirit of communication