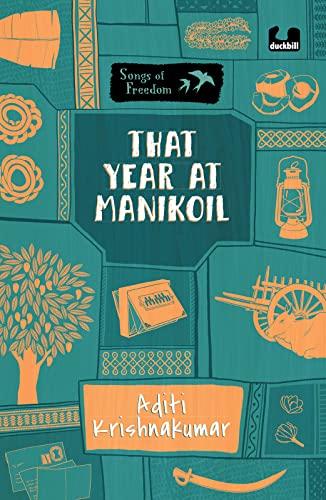 The Songs of Freedom Series by Duckbill, Penguin Random House explores the lives of children across India during the struggle for independence. That Year at Manikoil by Aditi Krishnakumar takes the young reader back into the year 1944. The novel unfolds amongst the raging World War 2. India is on the cusp of Independence. But there is another war closer home, with the Japanese army invading Malaya and Burma. It just might spill over to India.

Times are chaotic and uncertain. Raji is 9 and lives in Madras with her family. She is to visit Manikoil in Trichy to spend her summer vacations with her Thatha and Patti. But there’s uncertainty all around as Japan has invaded Malaya and Burma. The war just may reach Indian shores too.

On top of that Raji’s older brother Gopu Anna decides to enlist in the British India Army. Hence a tense Appa requests his family to stay in Manikoil indefinitely. Raji and her two older sisters Vasantha and Valli attend the local school with their other cousins. At school, Raji befriends Ilavarasi a new student who has come all the way from Malaya. She and many like her have escaped, uprooted from the only life that they have known. Strangers living a life of a refugee in a new country. They settle down to a routine.

Raji notices many people keep on visiting Thatha at night for secret meet- ups. Inquisitive she wants to know what all they discuss. Once in a while, she hears words like protest marches and Civil Disobedience. She too wants to do her bit. Help in the freedom struggle. But will Thatha call upon her? Raji loves to write letters to Gopu Anna to lift his spirits, and also looking forward to his letters that are few far and between. But she wonders why her classmates question her as to why he fights a war for the Britishers…that isn’t his to fight?

A book for school libraries, storytellers, and young readers who want to enjoy a good story with snippets of history. Here is a sensitively told tale that illuminates many important themes from the point of view of a child: Friendship and bonding, family togetherness, wars, suffering, duty towards the motherland, nurturing hobbies, and keeping faith in one’s abilities, however small they may seem. There’s a little for everyone. Last but not the least, letter-writing as a habit is to be nurtured to keep in touch with friends and family.

In the hunger for power and territory, nations fight wars. But we need to realize that war does no one any good. War may seem heroic and adventurous as shown in books and fables. In reality, it leaves violent imprints in its wake. Wars were fought then and even now but the story remains the same. More than the wins it is the tremendous losses on display. Endless destruction, human suffering, broken uprooted families. These tales from The Songs of Freedom strike a chord with the young school going middle grader, as well as the adults in their life!