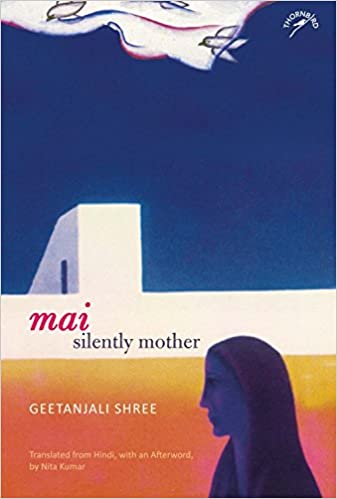 Some novels gently shock you from the start, by their powerful beginnings, even before you begin to delve in. “We always knew mother had a weak spine” is the first line that jolts the reader of Mai. Metaphorically and literally as well, Mai, the subject of this work, is always bent down, serving others.

Mai. A word that simply means mother. Geetanjali Shree, who recently became the first Indian to win The International Booker Prize for her novel Tomb of Sand, is the author of this poignant story set in a small town of North India. Mai, translated by Nita Kumar from the original Hindi, may have come into prominence once more because of the author’s recent award, but this in no way eclipses the true genius that one finds between the pages. Niyogi Books has proudly re-introduced Geetanjali Shree’s debut novel Mai, translated to English as Mai: Silently Mother by Nita Kumar.

Mai is the mother of Sunaina and Subodh Tiwari, the siblings who centre their lives around their mother. The action takes place in a well-to-do household in a small town near Lucknow. Mai is the quintessential stereotypical daughter-in-law, wife and mother, caught in the web of patriarchy. She is a nameless existence in the house, performing her “duties” towards each member irrespective of whether or not they appreciate or value her. In fact, she is more often abused, emotionally and psychologically. She is caught in an overly patriarchal world, playing her role by the set rules of an orthodox society.

But Mai’s children are children of the modern world. They want to rescue Mai from the clutches of the unfair situation they see her entrapped in right from their childhood. Sunaina, the daughter, is the narrator of this quest. Through the vivid descriptions of the psychological landscape of their childhood, against a backdrop of changing India, and changing social mores, the reader gets an intimate glimpse into the inner workings of an apparently ‘normal’ family.

If you are a reader who has also been a part of this time landscape where patriarchal orthodoxy jostled with modern liberal thoughts, you’ll have a lot to identify with. The descriptions of a mostly subtle and sometimes direct discrimination between the siblings themselves owing to their gender is evident in the book when Subodh is ‘allowed’ to study at a hostel away from home and Sunaina is expected to be more ‘tamed’.

The characters are real and nuanced. Subodh is the son of the house, who to his credit is a feminist and harbours liberal thoughts. The grandparents represent the typical archetype of old-world values. Babu, the father, seems like a limited version of the person he could have been despite the freedom and power in his hand. The aunt or bua represents what lost opportunities and deprivation can do to people. But it is Mai who steals the show.

Mai. She is deep and unfathomable. She is silent. The powerless. And yet she wields the strongest hold over the children. In not binding herself to them, in setting them free she somehow creates a bond that keeps them coming back. She is the self-sacrificing mother, the silent worker who yearns no recognition and has accepted a lower position in the familial hierarchy. And yet, she is supreme.

The reader will recognise the archetype of motherhood in Mai. The novel is a poignant story in terms of the plot as well. One follows the life trajectory of the siblings and their unique relationship with their mother.

But, through this process, Mai raises many philosophical and existential issues, gently weaving them into the story. The language is beautiful and the sentences string into each other quite lyrically. If the English translation is so poetic, perhaps the original Hindi text would be all the more endearing.

Mai: Simply Mother is a novel that allows for slow contemplation. Readers looking for a narrative that will lead them to contemplate and enhance their understanding will enjoy this book. It reveals the psychological nuances of people and relationships caught up inextricably in the tangled web of convention and orthodoxy.

Tata vs Mistry- The Inside Story by Deepali Gupta