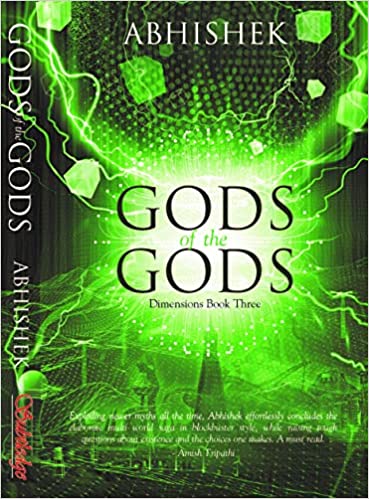 Mythology meets science. Legends jostle with philosophical truths. Existential questions cross through worlds. ‘Energy’ takes on a new meaning. Gods of the Gods: Dimensions Book Three by Abhishek merges science fiction with views of a dystopian future, held together by a refreshed take on what is good and evil. Published by Indus Source Books, this book is the third of the trilogy comprising Father of The Gods (Book 1) and Land of the Gods (Book 2). The backstory forms the base of the continued adventure, though God of the Gods: Dimensions Book Three is easily readable as an individual novel as well.

Odin, the ruler of the Asurian planet is under threat from his own son Baldr. He is in hiding with his grandson, Mathias, the son of Thor, who is also Odin’s son. But the dangers are not only internal. An external planetary force, controlled by an energy is on the way to attack the worlds that exist. More dangerously, the energy comes from beings who are seen as the Gods themselves. There is the Earth of course, and then there are the Gades, the underwater world of Atlantis that harbours a grudge against Odin. And then we have the Jargaryaan- a planet that has been wrecked to almost destruction. On the other edge is Hel, a barren area on the South Pole. All the events in the book lead to the final battle- the battle of Ragnarok.

There are references to Norse mythology and popular culture, not lost on those who know. Thor and Odin may sound familiar, as would the very essence of the ‘Asurian’ world, that forms an integral part of this fictional universe. Even the final battle, Ragnarok, is a term that has roots in Scandinavian mythology, referring to the end of the world of gods and men.

The saga of multi-universes takes on a new momentum as the battle between good and evil takes on a new form. The Asurian world on one hand, and “Gods” on the other stand in battle with all the other players in between. This is no small fight. It is an interplanetary war and quite early in the book the reader is drawn into the majestic strife. The hero, Mathias, who is the son of Thor, is up against something unsurmountable, or so it seems.

While the characters evoke myths, and some of them are known as “gods” on the earthen realm, the warfare is futuristic. One has cybernetic organisms and extremely technically sophisticated weapons. The concepts of energy surpassing even matter to enable beings to travel across dimensions is a fascinating proposition. To me, the imaginings of a technologically enabled future and the futuristic visions of being depicted in the book, steal the show. Fantasy, Myth and Science combine to give us an adventure filled thrilling read.

As one reads the book there are stark reminders of a dystopian future, as well as reminders of a scary present- children born in pods, chips implanted in brains, the constant monitoring of actions by the state, a raging pandemic, energy crisis with reserves of energy from ‘Malti’ slowly depleting, impeding security threats and rulers who think of personal gain and not of the welfare of their people. All this seems horrifyingly true of the real world we live in, and the future we can imagine.

All these elements are woven into the narrative. As you read the book, despite the setting in a fictional world, and despite the outer worldly creatures, and the earthlings of course, the emotions that they experience seem so universal. There is the heady desire for power at all costs seen in Baldr, who knows that overthrowing his father is the path to ultimate power. There is the cruelty of war, and the stench of death and destruction.

Gods of the Gods- The energy saga

Another concept that I found fascinating is using energy to open dimensions and access portals in order to navigate different worlds.  It is a glimpse into what a technologically enabled future might be, and how ‘energy’ conceptualised in a very creative manner in the book, is a dimension that would have a pervasive role in warfare and interdimensional travel in the future.

It may seem that a lot has been packed into one book. But then a story of epic proportions must have varied nuances! Suffice to say that the myriad of ideas and themes all come together beautifully without weighing heavily on the reader.

While this book follows from the previous ones, there is enough background given at the beginning to fill the reader in so that the reader doesn’t feel disconnected, and can read this book without missing out on any information.

Gods of the Gods: Dimensions Book Three by Abhishek is the apt read for readers who enjoy science fiction, dystopian stories and tales fueled with adventure.