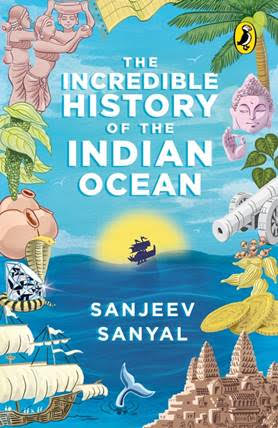 The Indian Ocean, most of us would recall on the map of India. I remember Geography classes in which I neatly marked the Indian ocean with a coloured pencil. Fast forward to our daily lives, we look at the seas and oceans more at the periphery of our lives. But, the deep blues hold deeper secrets that we must unravel. The Incredible History of the Indian Ocean by Sanjeev Sanyal is almost like a key to unlock these mysteries. This book is an adaptation of The Ocean of Churn. Published by Puffin, the book is a historical narrative, as much as a geographical one.

Many nations and many people share the Indian ocean. Politically different, but bound together by this vast body of sea, the mighty ocean wields its influence on a greater part of humanity. The book takes us on a fascinating journey through the history of mankind. It has cradled clues to the history of mankind. One can’t really learn about it without delving into how the world has evolved. The world started off as one continent- Pangaea. Yes, it seems that the world is indeed one. However, these slowly drifted apart and continue to do so. At the same time, much before homo-sapiens, which is the species we belong to, came on this planet, we had homo-Neanderthals roaming about, and it seems we may have had a role to play in their extinction.

What has all this got to do with the story of the Indian ocean? A lot, as you shall see when you read this book. The book tells the story of how the continents separated, how the oceans came to be. It narrates the adventurous tale of how our ancestors migrated. Just like the slow and subtle movements of the waves on a vast Indian ocean, human history is full of movement and change. Nothing has been constant and the story is not over yet.

There are stories of courageous explorers who at great personal risks, made exploratory voyages. Stories of the inquisition and other historical events, each of which left a mark. A lot of history of how the Indian diaspora came to be creeps in the narrative. The spice trade, advent of the East India Company, the opium trade, rise of madras, Bombay and Calcutta, and much more weaves into the fascinating narrative. You will find descriptions of the historical voyages made in the Indian ocean, pictures and information of the ancient monuments that once stood on our coasts, remnants of a few that are still there. There are the tales of power struggles and the rise and fall of empires. World history intersects with the unfolding of the story of India.

There are some things we consider modern which actually had roots in the past. The mention of climate change (quite humorously as an ‘early edition’) is very crucial as it alerts the reader to a concept that is the buzzword today. Through the stories of the trade links between India and other parts of the world, such as Middle-East, he not only shows how important the Indian ocean was, but also highlights the fact that there was a kind of globalization in the past as well!

The book draws heavily on research, including accounts of travelers of the past, who chronicled their journeys. The book is like a historical clue hunt taking us through the birth of civilizations who have migrated here and who have moved on. The Indian ocean was or rather is a “geopolitical” board where a game of chess is being played. The beautifully written narrative with great illustrations and simple language captures this fact as well.

This book is a must for history and geography buffs, and offers an interesting perspective for young adults. The Illustrations by Nikhil Gulati make the experience of reading all the more engaging, as does the smooth conversational style of the author.

The impression as you read The Incredible history of the Indian Ocean is that of constant change. What we were and where we lived was always changing over time. Migration, the role of climate and the geographical and other changes led to a kind of sifting and changing. Migration is indeed an underlying theme as it shows us that people through history have always moved from place to place in search of a better life. That people have rooted, uprooted and re-rooted themselves. This is the human enterprise and this is what we have always done. Today, we think we live in a world where we can be rooted in one place. This book gently reminds us that we are a part of the change and that even as we stand supposedly rooted, we and the things around us are changing all the time. Churning rather, just like the Great Indian Ocean.

Haiku by Kala Ramesh…. a crisp introduction to Haiku for children

The Secret Commonwealth: The Book of Dust Volume Two

Neel on Wheels by Lavanya Karthik