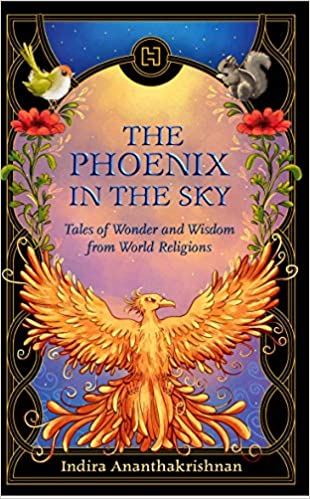 There is a lot of power in simple short stories and parables. The Phoenix in the Sky by Indira Anantkrishnan (Hachette India) presents a collection of short tales. The parables herein are curated from the rich treasure trove of literature. This belongs to different religions and philosophical teachings of the world. The essence of the book lies in its collection of wisdom from world religions.

Tales from Indian epics and mythology, stories from Zen Buddhism, accounts of personalities like Mother Teresa, Swami Vivekananda; saints such as Adi Shankara, tales from Judaism, Christianity, Islam, Hinduism, Jainism, Sikhism, Zoroastrianism, Baha’I school of thought and other religions. The diverse and extremely rich mix of parables ensures that the readers has enough food for thought. a delightful mix of varieties if you may!

Most of these tales are age-old, and a few, such as the tale of the 14th Dalai Lama, is rooted in the present. While these short bytes may span eras and geographical boundaries, they are all united in theme.

These short accounts will work in different ways. Some of them inspire the young reader. Others highlight moral principles that will help them along the way. Some are reflective and gently encourage the reader to think. Yet others bring a diversity of thoughts. Some will make the reader wonder, some will make him ponder!

Some of these are instances that many readers would be familiar with. For example, the story of Prince Siddhartha who became the Buddha is quite well-known. Yet other unknown but equally pertinent gems unravel in the book.

The book is apt for the tween and teen readership for independent reading. in addition, it’s also perfect to be read to younger children. I think the book has extremely simple and accessible language, and a soothing and positive tone throughout. The young reader can read it at a go, or pick out tales that interest him or her.

Moreover, while the language and content are noteworthy, what the book also shows is the fact that irrespective of the geographical or religious origin of the tale, all the stories are bound and guided by the overarching principle of humanity! The Phoenix in the Sky helps you relish tales of wonder and wisdom from world religions, philosophical schools of thought and inspiring personalities. This is a timeless collection of tales and deserves a place in every library- be it at home or school.

Look, Learn, Do- An interactive book about Indian artists by Purnima Sampat

Raising Mamma by Lalita Iyer, a simple book about the spirit of communication