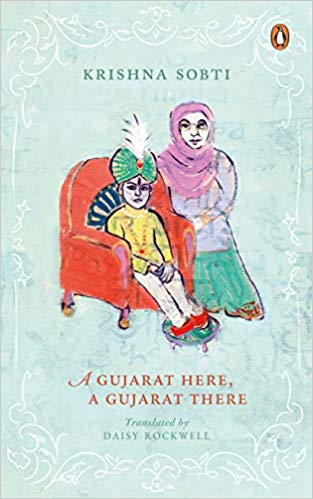 There is something very specific and strong about the context and setting of the novel, A Gujarat Here, A Gujarat There. The protagonist, Krishna, is a young and sharp woman. It is the year 1947 and despite the momentous event of independence, there is confusion and pain everywhere. Due to the partition, Krishna moves to Delhi where her family resides, from Lahore where she studied. She then seeks a position as a governess in Sirohi, Gujarat, which in itself is in a state of flux. The British have gone, leaving India as a free democracy. But, the princely states may just not have kept pace with the times. Would Sirohi go to Gujarat or Rajasthan? Would the young adopted heir, a child at the time of independence, succeed the throne? Would he be recognised by the newly formed government of India?

The story follows Krishna as she works as a governess to the young prince at the court of Sirohi. Krishna is made of tough stuff. The novel alternates between the pangs of pain due to separation from Lahore, the place she knew as home, then from Delhi where her family now resides and then her move to Sirohi, where she works as governess to the prince. The reader will be amazed at the brave foray into accepting the changes that mark her life. I found her a most delightful character! Her acute understanding of human nature and the politics of the times shines through.

The language that Sobti uses is beautiful and poetic as well, and laced with intelligent humour. For example, “Decisions were not circulated like advertisements and orders from governmental departments; instead they wandered hither and thither like rumours”. Krishna Sobti is not easy to translate, but Daisy Rockwell has done a great job!

This novel is known as a feminist partition novel, and rightly so.  The protagonist has to negotiate her way into life not only as a woman in those times, but also as a refugee. Sobti wrote the novel at the age of 92, distanced in time but not in spirit by the partition and the events surrounding it, that make up the backdrop of the story.

The story gives a deep insight into the psychology of a person who has been displaced. In the current context, where displacement of millions due to politics and wars, is so alarmingly common, the book feels strangely relevant. Being ripped from one’s roots and replanted elsewhere is not a good position to be in for any human being. What does this do to a person? How does it completely consume her mind and emotions, and yet how can she move ahead into an uncertain future?

The audacity of the protagonist, her refreshing self-assuredness, and her complete faith and confidence in herself, at a time and moment in history when women were still shadowed by patriarchy, pulls the reader inside the story. Her varied uprootings shake her, but they don’t bring her down. Despite the dizzying changes around her, Krishna is in charge of her life. Her subtle sense of humour and powerful observations about people around her will leave you admiring her intelligence. Even once within Sirohi, she does not give in to what ‘well meaning’ people around her say. For instance, she rejects the housing options shown to her by her employers and demands for a small cottage that is supposedly haunted.

She questions the antiquity of thoughts and customs at Sirohi:

« Ancient teachings for ancient times. Do our pathways change when we ourselves change ? »

However, partition is only the background. The story moves ahead as the governess to the newly crowned prince in an old state of the newly independent country, moves on with her educative duties.

The language is quite crisp. This is one of the unique attributes of Krishna Sobti. There is no room for fluff! The pain and pangs of being uprooted are indeed best expressed through this hard hitting, well-chosen and curated selection of words.

It is really strange to revisit history through lived experiences. Here, I felt as if Sobti’s sharp observations took me back in time. The event of partition, the assassination of Gandhi, Nehru visiting the refugee camps with Lady Mountbattern and few other instances, we see this through the eyes of someone who experiences and witnesses these.

Gujrat is a place in Pakistan and then there is the Gujarat in India, where Sirohi is. This explains the title, A Gujarat here, A Gujarat there. Krishna comes from one Gujarat to another, in a sense. But her spirit is one to look ahead.

« Dont look over there. Dont keep thinking about over there. Now it’s time to look ahead at the bend in the road, not behind. »

The 5Gs of Family Business by Walter Vieira and Mita Dixit

The Novel Cure: A prescription of fiction and some literary tonics for a variety of ailments