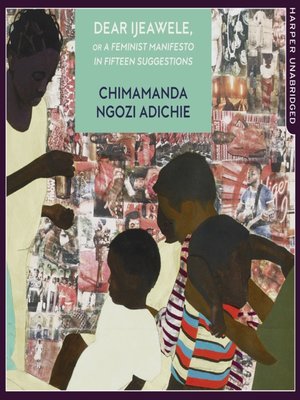 Dear Ijeawele, or A Feminist Manifesto in Fifteen Suggestions by Chimamanda Ngozi Adichie

As a very public figure, who has been extremely vocal about feminism, it would be natural to assume that the famed writer Chimamanda Ngozi Adichie is looked up to for her views on the feminist thought. Hence, it is not surprising that a dear friend wrote to her, asking for advice to raise her baby girl as a feminist.

Dear Ijeawele, or A Feminist Manifesto in Fifteen Suggestions by Chimamanda Ngozi Adichie started out as a response to that question. While it was meant for a woman as an advice book on raising her daughter, it transcends barriers of gender. It should be read by mothers and fathers of boys and girls as well as by anyone who seeks an equal society.

Adichie begins by sharing her feminist formula, that is two “Feminist Tools” as outlined below:

The second tool is a question: can you reverse X and get the same results?

The fifteen suggestions take the form of fifteen simple and lucid chapters. Adichie presents her guidelines on raising a child in the context of the feminist thought.

Adichie attacks the use of language that reinforces stereotypes. She often does this in a humorous and memorable manner, using the dry wit that she is known for.

For instance, the statement below:

Remember in primary school we learned that a verb was a ‘doing’ word? Well, a father is as much a verb as a mother.

When we say fathers are ‘helping’, we are suggesting that childcare is a mother’s territory, into which fathers valiantly venture.

She explores outdated notions of gender roles and how adults unknowingly or knowingly instill these concepts into minds of children. She gives examples to show how early society reinforces gender stereotypes: classifying colours blue and pink, arranging toys in toy shops in neat gender specific sections and worse in the language we use to talk to children.

I remember being told as a child to ‘bend down properly while sweeping, like a girl’. Which meant that sweeping was about being female. I wish I had been told simply, ‘ bend down and sweep the floor properly because you’ll clean the floor better’. And I wish my brothers had been told the same thing.

Adichie addresses varied themes such as work, motherhood, gender roles, marriage, ideas of beauty and so on in a gentle but firm voice.

While she obviously addresses the more clearly visible and apparent instances of how we subscribe to gender inequality, she also looks at examples where a so-called feminist face hides subtle but pervasive inequalities. For example, a husband “allowing” his wife to work (in a society where women are predominantly relegated to domestic chores) may seem to some as progressive. But, Adichie questions if it is really so. Such instances of tokenism give a false impression of gender equality, and the book illuminates this.

The book is highly practical in nature. The fifteen chapters are suggestions and she deftly weaves in these practical tips with the theories she presents, thereby making this a guide which parents can follow.

While the tone of the book is gentle, there are some passages where she fiercely and strongly makes a point.

Please reject the idea that motherhood and work are mutually exclusive. I have no interest in the debate about women ‘doing it all’ because it is a debate that assumes that care-giving and domestic work are singularly female domains, an idea I strongly reject. Domestic work and care-giving should be gender neutral, and we should be asking not whether a woman can ‘do it all’ but how best to support parents in their dual duties at work and home.

Adichie’s work is a short but highly impactful read. It is a book you may finish in under an hour, but whose ideas will remain forever. The book is a great starting point for a new discourse on what it means to raise boys and girls equally- in the true sense of the term.

Tags: Chimamanda Ngozi Adichie, Dear Ijeawele, feminism, or A Feminist Manifesto in Fifteen Suggestions, raising children equally, We Should all be feminists

A Touch of Evil by Dhruv Somani painstakingly chronicles the genre of horror and thriller movies in Hindi cinema.

Oxygen Manifesto- a battle for the environment by Atulya Misra

The Inheritors by Sonu Bhasin: Looking at family businesses in India