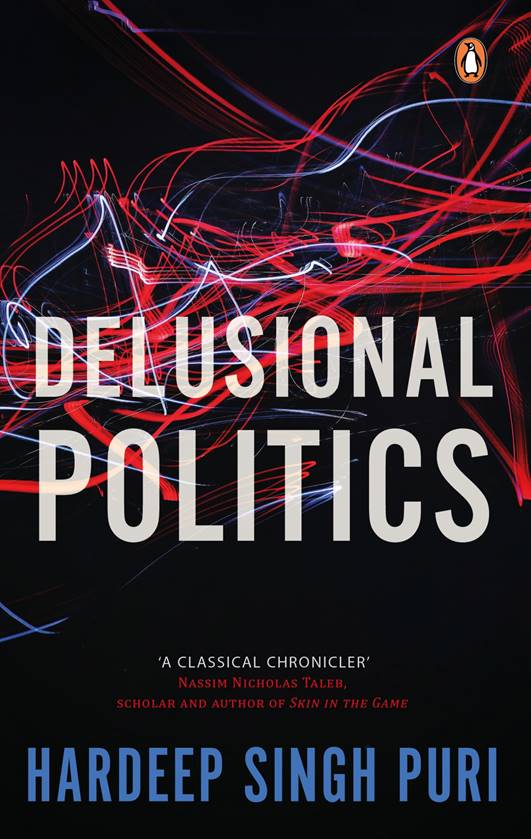 Perhaps of all things in the world, power is the most coveted. Leaders rule nations and understandably they wield power. They have the power to effect changes. They have the power to create and to shape narratives. However, what happens when these individuals propagate falsehood? At the heart of it lies delusion- a false belief. Delusional Politics is an ambitious aim to understand and chronicle this phenomenon.

Based on over four decades of work in the diplomatic field, Hardeep Singh Puri offers an insightful look at how the most powerful people in the world can be delusional and how their policies impact the future of the countries they rule.

There are many examples of delusional politics in the world – both currently, in recent history as well as from instances that occurred way back in time. While it is interesting and insightful to glean through these, Puri narrows the focus of the book to delusional politics concerning three case studies – United Kingdom post Brexit, USA post-election of Donald Trump and the story of India.

The book examines the delusional thinking and decision making of Trump against the background of several examples such as backing out of the Iran deal, relationship with North Korea, rejecting the Paris Accord and so on. It tries to critically look at Brexit and its aftermath. But perhaps most interestingly, it looks critically at the post-colonial reconstruction of India, and brings it right into modern politics.

What is interesting about the very premise of the book is that it talks about people in power, who do not necessarily have any kind of apparent ‘shortcomings’. How then can they, and a team of powerful and ‘intelligent’ advisers make decisions that may not ultimately prove good for people? “I was astonished and alarmed to know that behavioural science or psychology does not focus on how seemingly normal persons, without any known history of mental illness, can display delusional behaviour in their actions on a regular basis. The people around them come to accept this as normal. Such behaviour then tends to be rationalised as part of a ‘belief’ devoid of objectivity and facts” he writes. It is interesting to observe this in action as one reads the book.

We live in a post-truth world. We live in a society where data is used to form narratives and create them, rather than use facts. Delusional Politics paints a picture of how the narratives presented to us today are constructed. Don’t the complex algorithms of the social media platforms we use lock us into a tunnel vision? Isn’t it easier now than ever before to play with the complete lack of objectivity that people have today? The book illuminates how we the people more often than not become victims of delusions propagated by those in power. To add on to this problem, people who share ideological clusters stick together and share beliefs based on emotions rather than facts.

A look at the world- one question at a time

Singh makes an interesting comment in the section on global governance- if all individuals in the world had a choice they would most likely choose peaceful coexistence as opposed to war. Then, why are nation states leading the world into an existential crisis? He looks at crucial aspects of global governance. With over four decades in diplomatic relations it is natural that he should analyze the role of the UN against this concept of delusional thinking, which he does. The section on terrorism and how delusion informs the approach to it is also quite insightful.

Against the background of these unexpected and surprising events he talks about how the media got it all wrong. The fourth estate has suddenly lost the credibility it has enjoyed in the past. This is the background to the book. His critical look aims to provide a macro view of world politics. It is an ambitious search, but an increasingly important one nevertheless!

Singh’s subtle humour adds its own special charm to the experience of reading Delusional Politics. It is true that Mr. Singh has the benefits of hindsight as he assesses these conditions. Despite that, it is a great lesson to understand the very high costs of delusional politics, and the disaster that can happen when a delusional politician is not able to “See through the final play in this game of chess”.

The Legend of Virinara by Usha Alexander: A parable of our times…set in the past

Gods and Goddesses of India by Kanika Gupta: A unique colouring books for adults

Rukshana Eisa’s The Golden Code explains all the etiquette rules that you need to know!