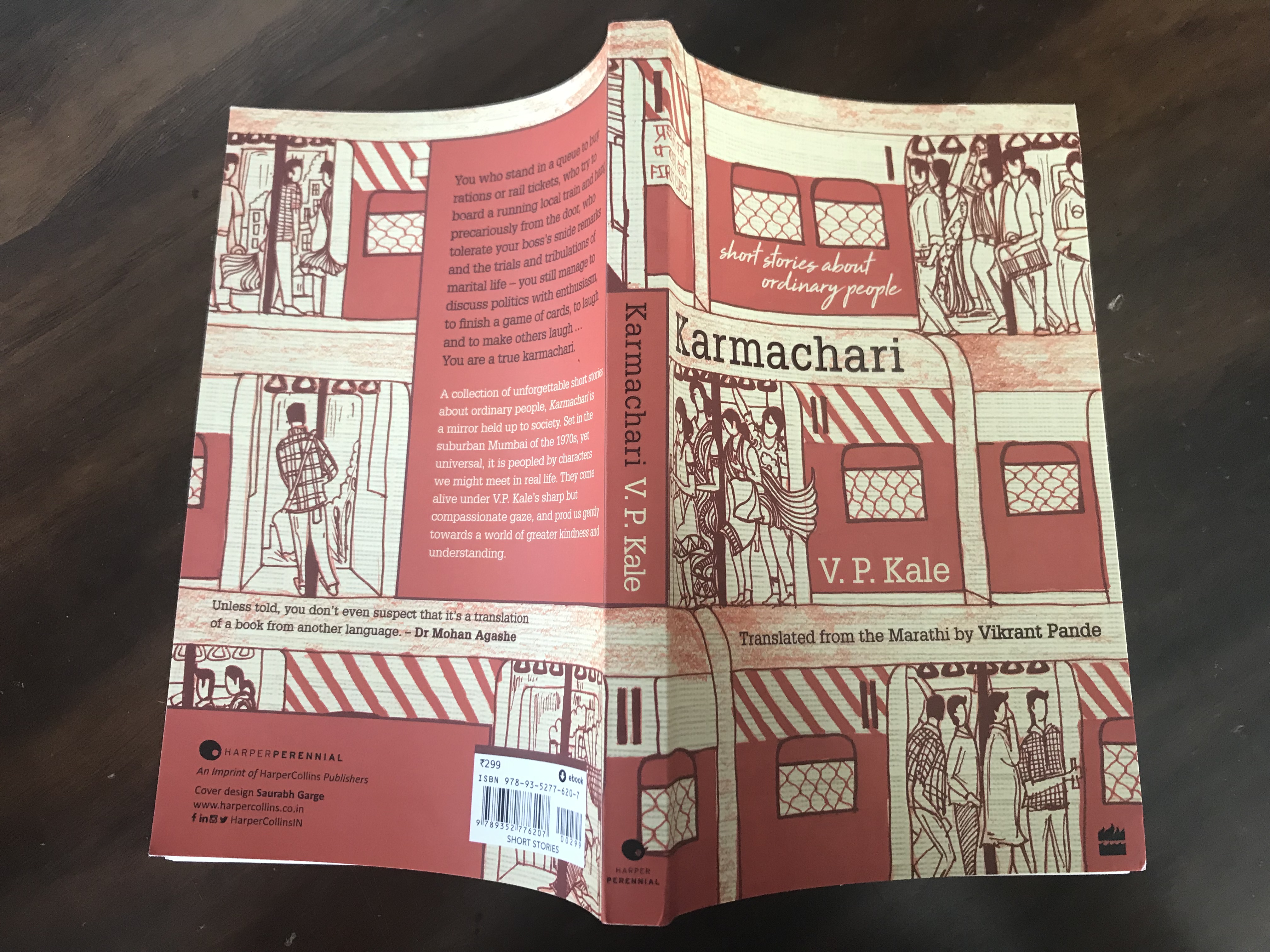 “Just read the story, turn the pages, believing that it must be happening somewhere” writes VP Kale in his collection of short stories, Karmachari.  That ‘somewhere’ could actually be anywhere considering the vast and common appeal that his works have.

Vasant Purushottam Kale (1932-2001) was a very prolific writer who wrote in Marathi. He was popularly known as “VaPu”. He also started the trend of reading his stories to live audiences. His stories are known for their insightful characterization. Karmachari, a collection of his short stories translated into English by Vikrant Pande, now brings this vibrant universe to a new generation of readers.

The characters you encounter in the book are ordinary people. But, it takes the pen of a genius to draw us into their deepest emotions, secrets and their surprising strengths.

These short stories will introduce you to a host of characters who will surprise you. A portly man on a train with an overbearing wife turns out surprisingly intelligent and mature. A rich upper class fellow travels by local train to “help” people in his unique style. A middle class contractor’s feelings of fear and guilt on taking his first bribe. A man who can’t let go of grudges till death. A middle aged man feeling attracted to a past lover. A married couple trying to understand each other. An anxious father who loses a beloved son, and many more memorable characters.

The reader will notice that the names of chapters are names of characters in the story. This underscores the importance of the character as central to the story rather than any plot or storyline. Furthermore, each story is in the first person. The narrator is speaking directly to the reader. He also builds up the story through conversation. So yes, you can forget about long drawn descriptions! The stories move fast towards their conclusion, using conversation as rungs.

Karmachari -Local and yet not

Karmachari is set in the suburban Mumbai of the 1970s, predominantly in a middle class locale. However, this does not mean that these are restricted to a particular group alone.

V.P.Kale’s insight into human psychology is truly profound. Hence, despite the seeming boundary of the ‘setting’ his stories truly rise up to apply to a general human condition.

One of his characters in the short stories says:

I enjoy the diversity of human beings. Everyone has their own traits, whims and characteristics. And getting to know someone new is exciting because it opens new avenues for such discoveries.

In ‘Satwalekar’ a new office clerk changes things around much to the irritation of a senior. While gossiping about the reaction of this senior with his confidant in office he says:

“He has all the traits of anger, greed, jealousy, etc. That’s why I say he is a complete human being. I know how to guard myself against such people”

A little later the conversation continues…

“I still believe Tambe isn’t at fault. It’s easy to win over such people. I can win him over any day by ordering a special tea for him”

“Of course! Their expectations are as small as their jealousies”

All these instances, and many more in the book, go on to show that the stories are not really confined to a particular group, but have a human universal appeal.

Not lost in translation

These short stories were originally written in Marathi. In the English translation, the language is simple and lucid, much like it was in the original works.

Humour that is intrinsic to language is something that is challenging and often lost in translation. But, Vikrant Pande has successfully translated a lot of the wry humour from the original text in Marathi to the English.

For instance, the story ‘Khambette’ mentions:

The trains were running late. There was nothing surprising about that, though. The surprise lay elsewhere: we never knew on what day it would happen.

The translation is so seamless that unless someone points it out, the reader would not know that this is a translation!

There is a philosopher in every man- no matter how ‘common’ he is. Each of the characters who are a part of the stories in Karmachari, add to it by taking on their own philosophical angle to the situation.

In the last story, titled Vandana Samant VP Kale appears in the story as a writer character himself. It is here that he finally cements his belief as the writer being an observer of society and people, and a chronicler of sorts.

Another poignant aspect of the stories, despite their philosophical bent, is that Kale refuses to moralise. In that sense he is sympathetic to the inner worlds of all his characters irrespective of whether they are perceived as positive or negative by general society mores.

VP Kale’s Karmachari is a collection of stories that rises above boundaries and lines and transcends to universal appeal.

Godsong, A verse translation of the Bhagavad Gita by Amit Majmudar