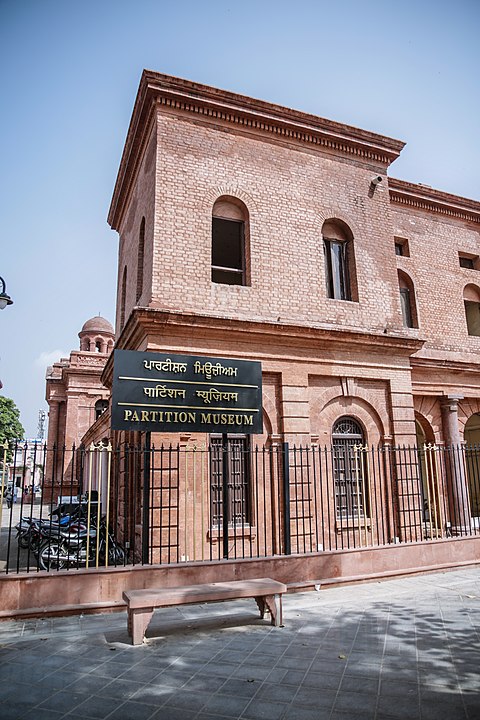 The events that followed the partition of India and Pakistan are perhaps one of the saddest and terrible tragedies that have afflicted both the nations. Even today, a stubbing numbing pain remains in the hearts of those who experienced it.

The Partition Museum at Amritsar is located just a few minutes away from the Golden Temple. The striking red-brick Town Hall building hosts the most poignantly articulated memories of an event that deeply shaped the collective consciousness of citizens of India and Pakistan. The Partition Museum was inaugurated in 2017. The heart of Amritsar seems just the right place for this structure of living memories.

In the book, Remnants of a Separation: A History of the Partition through Material Memory, author Aanchal Malhotra, looks tenderly at how people experienced partition by viewing what refugees carried with them across the border. Material things can tell powerful stories. These objects speak of how their owners experienced the partition- emotionally. You can sense that feeling when you walk through the Partition Museum.

The Partition Museum echoes a moment in history through the eyes of the people who experienced it. It is rightly established as a People’s Museum. One of the most meaningful and touching aspects of the displays here, are the artefacts and collections that are so generously donated by partition survivors and their families. These objects are very precious- they are the symbols of a life before the event that tore many lives apart.  Some of these are practical things and some are sentimental. These include utensils, trunks and clothes, wedding sari, a jewellery box and a tin box.

As one moves into the museum and through the sections, there is a sombre silence, despite the place often being quite crowded. There are comprehensive displays of objects and information on the walls and around the rooms. Whenever possible, there are art displays as well as screens and headphones to see and hear detailed commentaries. Right from the time before partition, the independence movement, the early demands for separate countries, and ultimately the actual event of the Partition followed by the painful consequences, all have been etched in the museum.

The partition and women’s experiences of it is also a background to many novels. The Women’s Courtyard by Khadija Mastur (This is a translation by Daisy Rockwell. Mastur’s novel was first published in Urdu in 1962, titled Aangan) and tells the tale of four generations of women living in the family, against the background of partition. A Gujarat here, A Gujarat there by Krishna Sobti, also has the partition looming over the events that take place in the novel.

Out of pain, art is often born. Partition led to numbing terrible pain for common people. The visitors also get to see the horrors of partition expressed through art and literature in the museum. Artists painted horrors of the time, while writers wrote about the same. Train to Pakistan by Kushwant Singh has become a classic of sorts in this realm.

Another book, The Begum, also alludes in detail to this event. This is a biography of Ra’ana Liaquat Ali Khan, Pakistan’s Pioneering First Lady. She was intensely involved in the cause of a separate nation for Muslims. The book talks about her life, but due to her deep involvement in the struggle for freedom, one gets in-depth information about the events that preceded partition, and what happened thereafter. One also gets a background perspective of the genesis of the Two-nation theory even before India got independence. What comes through in this book is the fact that no one realised the extent of bloodshed and the agonising events that the partition would lead to.

And while we think of the partition, there is another body of voices that have been largely unheard. There are many Indians, in Britain, who have also experienced the painful event. In Partition Voices by Kavita Puri we read about stories of South Asians who were once subjects of the British Raj, and are now British citizens. The genesis of this book is personal as the author’s father revealed to her the horrors of partition. He was but twelve when he along with millions of other Sikhs, Hindus and Muslims was caught up in the aftermath. However, he supressed the pain. There were many like him. These voices are now being heard.

I think about these books that are so relevant even so many years after the hastily drawn border created horrors in the lives of the people, and still continues to impact the collective consciousness of the next generation.

The museum offers a multi-media experience across fourteen galleries. In addition to the objects, the archive includes oral histories, documents, and footage. One cannot even imagine the unspeakable horrors that people may have experienced during those times. Their website is extremely informative as well.

The Partition Museum has done commendable work- that of sensitively preserving the story of a time of destruction. It is a reminder to humanity of the futility of violence. If you’re on a visit to Amritsar, do plan a visit. It is a soul-stirring and humbling experience!