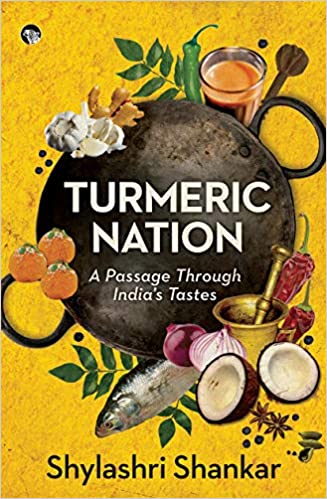 There are many India’s that exist within India. Trying to comment on our rich cuisine and the diversity that goes back so many years and spans thousands of cultural traditions, is a herculean task. But, Turmeric Nation- A Passage Through India’s Tastes by Shylashri Shankar (Speaking Tiger) tries to capture the food and culinary traditions and diversity of India through a collection of in-depth essays.

I understand the difficulty of researching food in a society like India, where there is multitude and pluralism. Finding a common and unifying strand is like finding a needle in a haystack. But then, we are proud in our diversity, and so be it in food as well!

This essays examine Indian cuisine through many different angles. Hence the book is divided into many different themes such as ‘taboos’, ‘leisure and creativity’, ‘geography’ and so on. Each theme starts with a question, leading to a thematic exploration, and yes, to more questions as well.

There is the practical, the research based and the philosophical aspect.

The book covers many research-based observations. Did you know that Indian food dislikes positive pairings? Despite differences in cuisines of North and south, this is a unifying factor as per a study. “Each spice has a unique function. No two spices or fruits performing a similar function will be found in a dish. Hence, sugar and jaggery will not be found in the same dish”, writes the author.

One of the most poignant themes of the book has to do with how we are literally what our ancestors ate. The author quotes research supporting the theory that our bodies have evolved to absorb nutrients from foods that our ancestors ate. This is genetic and hence the recommendation to stick to your traditional diet, as well as cherish, value and preserve the food heritage that we have.

For those with a bookish-bent, the lost world of cookbooks will be an interesting chapter to savour. Right from the older cook books and food chronicles to modern ones like Tarla Dalal, you will find some interesting nuggets.

It is fascinating to learn about food traditions that we have invented over time, or ones that have evolved. It is equally interesting to know little facts and anecdotes about menus, use of food as poison and much more. For me, the trivia associated with food was an interesting element in the book. This trivia could be based on research or on anecdotes, but there is an interesting range. There are references to different ages- right from ancient civilizations, to colonial times right up to the modern times.

There was a time when I used to wonder if we are all just over-obsessed by food. Whether it is for a party, or gathering, we want to see that our guests have had more than their fill. We are obsessed with ‘healthy’ food and ‘diet’ food. We seek solace in it. Recently, during the pandemic forced lockdowns world over, the food obsession spilled over to social media. But, Turmeric Nation puts food in the right perspective.

So, if you thought that food was just about food…. think again. Food goes so much more into our evolutionary history, our culture, our attitudes and our DNA. It is a book that will make your relationship with food a stronger and more intimate one!

Love is Beyond Everything- A Slice of Life Romance