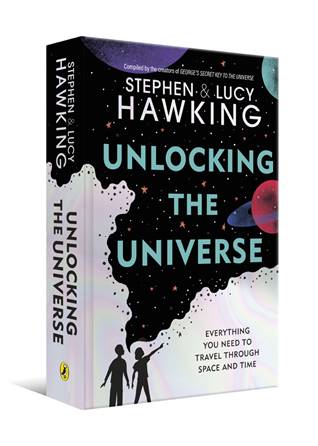 Have we not often looked at the vast night sky and wondered about the story of the universe? Of what really happens in that dark area of space which is beyond our reach? The mysteries of the universe are enticing and many children and adults, grapple with questions about it. Now imagine that the best minds in the world are answering these questions in simple language. This is perhaps the apt manner to summarise Unlocking the Universe by Stephen and Lucy Hawking (Puffin Books)

When I started reading this book, I felt it would address many questions about the universe (which it does) and I would probably recall a lot of that ‘stuff’ from school science lessons. But I was totally unprepared for the beautiful enigma about the universe that the book unleashes. There is just so much information and presented in such a simple conversational manner, that I would love to study space and the earth with fresh eyes now, if I ever had the chance!

Scientists from across universities and allied disciplines address many questions about the vast cosmos in a very simple and lucid manner that will appeal to the teen and adult reader.

There were many questions that I had about the universe…..and many that just did not occur to me! For instance, I realised why the more distant we look out at the universe, we are actually looking back to the past! That’s time travel explained!

And even as we look beyond the horizons of our universe, we also look deep into the past of our earth to see how life evolved, and how it all started. The story of the birth of the earth, is also linked to the story of life. And while we have been able to chemically create the special conditions that mimic conditions on Earth a long time ago, we have still not been able to create life in a laboratory. However, the scope of the dreams that link human scientific pursuit and the story of the universe, comes across beautifully in the book.

The book is vast in terms of the questions it addresses. It covers a range of themes like genesis of the universe, the beginnings of life, theory of evolution, beginnings of life, the forming of oceans and the role they play, the formation of volcanoes on earth and beyond, the building blocks of life, dark matter, the periodic table, and even robots, AI and climate change.

What piqued my interest was that while the essays answered many of the pure scientific questions, there were some other interesting bits discussed such as conspiracy theories (how I loved that chapter), space diving (it can be life saving for astronauts!), black holes and the implications of climate change.

There is also a section devoted to the planets of the solar system and fascinating facts as well as common questions about them. The chapter on Black Holes has been written by Stephen Hawking himself, and it is highly interesting.

But it is not only the vastness, but also the depth that makes this book stand out. And, as I realise, even seemingly complicated concepts can be explained in a simple and straightforward manner. While the flow of information is smooth, you will find little boxes and tabulations and well explained illustrations and charts that make the reading all the more accessible, adding a little spice to the delicacy!

And as I read the book further, I see how astronauts and space scientists have looked far beyond the horizons to explore the depths of the universe. The interesting account of a space researcher who actually lived on mars, a chapter on robot ethics, stories of life potential elsewhere; the much-recounted tale of man’s landing on the moon, the seemingly unbelievable question of what would happen if all the lights in the world went out due to some changes in space…… all these add a human touch to the stories of space.

But the book also discusses topics such as AI, robotics, the future of food and other related concerns that need to be a part of the human discourse on earth. These are also some of the interesting bits that will gently nudge you into conceptualising the future of humanity in space, and on the earth itself.

This is one of those rare books that truly enhance one’s knowledge and understanding to a completely different level. While it is very accessible to the interested reader, it’s not a breezy weekend read.

This is a book to savour and read. You could move from start to finish or take dips in the middle as your interest guides you. It will surely answer many of your questions about the universe. And gently lead you to ask more!

Well, if the universe beacons you better answer the call and take part in unlocking the universe! Embark on this journey into space and beyond. Are you set for the lift off?

Turmeric Nation- A Passage Through India’s Tastes by Shylashri Shankar presents the reader with some deep food for thought.

Clues to the Cosmos by Shohini Ghose