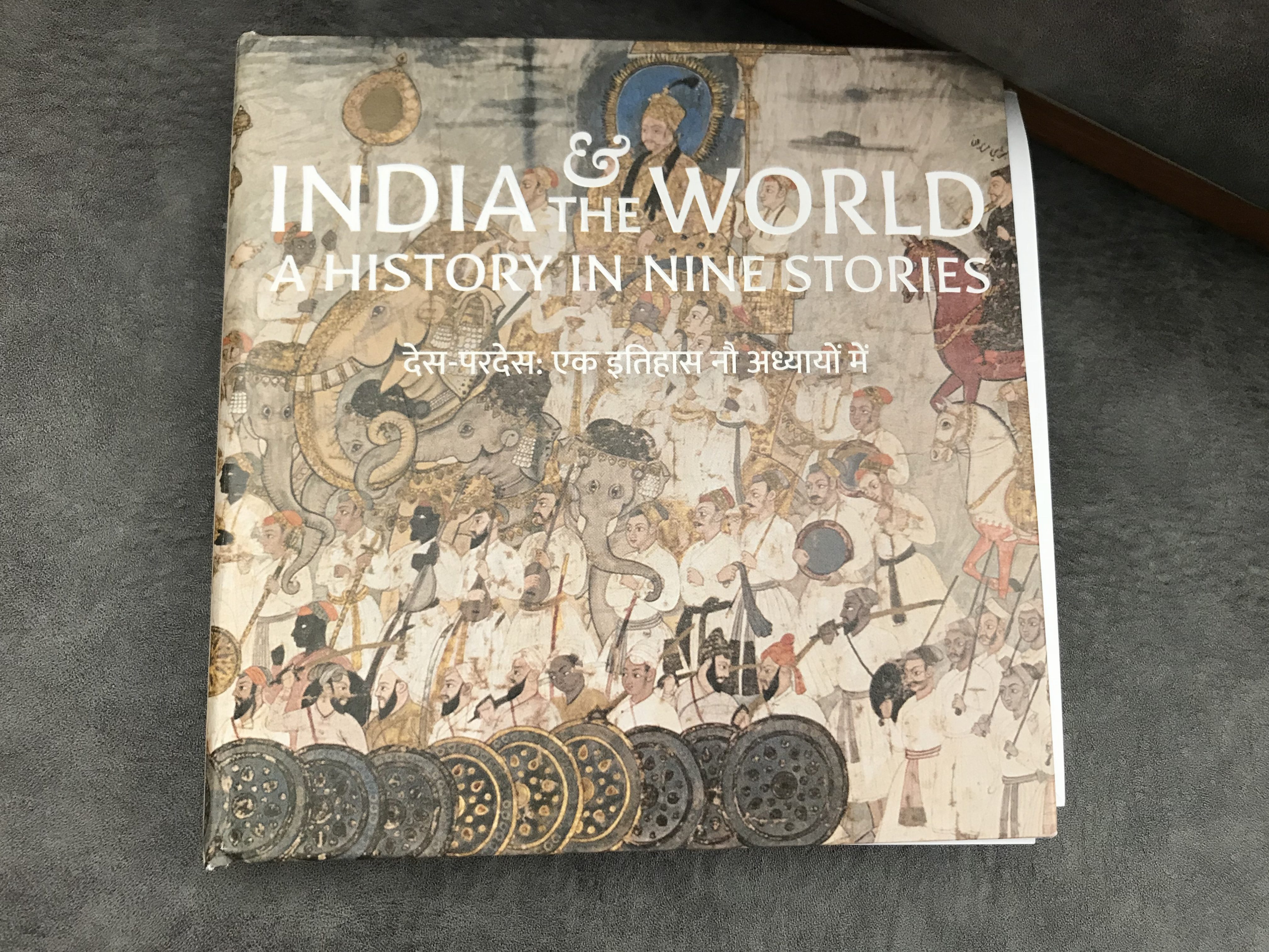 We all know that connectivity is the mantra of the day. India and the World: A History in Nine Stories, an ongoing exhibition at the Chhatrapati Shivaji Maharaj Vastu Sangrahalaya, Mumbai takes on a different lens to look at how India was connected to the world in the distant past.

India and the World: A History in Nine Stories: The Exhibition

There are two books which highlight the essence of this exhibition. They distil the key facts, conclusions, thoughts and descriptions illuminated through this beautiful exhibit.

The smaller book, India and the World: A History in Nine Stories, is presented in an innovative way. Using the technique of paper folding, each page in the book is neatly folded into a smaller square and on opening reveals the rich text and images. Neeta Premchand from the Bombay Paperie is credited with the concept and text. Rachana Devidayal Shah has done the design and layout of the artistically presented book.

Each page talks about a concept and story through which one can view India through an object, and then again through similar objects from other parts of the world. Navigating through the book by folding and unfolding the pages is a tactile experience in itself!

One does not really need to go through it chronologically or in order, and that is fun part. This book is quite apt for reading to children. This book is available at the exhibit.

The other book, India and the World: A History in Nine Stories by Neil MacGregor is more detailed. It aptly accompanies this collaborative exhibition that creates dialogues between the rest of the world and India through the displayed artefacts. It shows how different people have responded to situations in their own way. It also highlights a deep understanding of an intricately interconnected global history.

So, what do you exactly look out for in the exhibit? In simple words, you look at objects from the past- objects from India and similar objects from another part of the world, mostly during the same time period in history.

This sounds simple, but as anyone who corroborates and coordinates objects knows, it is a herculean task to curate such an exhibit! Yet, India and the World: A History in Nine Stories is a fantastically curated exhibit that is quite illuminative.

When you look at the same object and how it was so similar across the world, in eras where there was almost no global connectivity, it kind of gives you an idea of how similar human beings are, and how connected we are in our collective subconscious.

As you enter the exhibit, some of the very first objects you will see are hand-axes from different parts of the world- India, Tanzania, Jordon and Europe. There was no communication between these parts of the world before ages, and yet there is a striking resemblance in these creations. The same thread of thought runs through the entire exhibit.

While many of the objects were quite enamouring I found the “Heads” of a Kushan King, Roman Emporer Hadrien and head in style of Alexander quite interesting to compare.

Children will love the interactive activities at this exhibit at the Chhatrapati Shivaji Maharaj Vastu Sangrahalya (CSMVS) Mumbai.  They can make their own bookmarks with Ashokan edicts, weigh different stones and materials, stamp their very own coins in a variety of designs and do some more printing at the Harappan stamping station. At the end of the exhibit there is a nice reading corner with a curated section of books on world history.

India and the World: A History in Nine Stories, both the exhibit and the books present a unique world view of India!

The Intuti has arrived- what tarot, gestalt psychology and intuition can do for your creativity