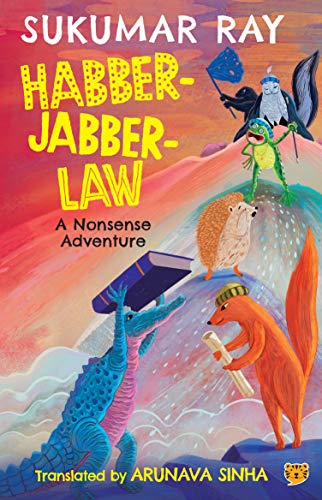 If you want to know about nonsense literature, you must first discount the word nonsense. Literary nonsense is a niche genre where the work of fiction actually balances sense and nonsense. A poem or story may appear illogical, but it must retain a sense of logic. There is a delicate balance to achieve here.

Habber-Jabber-Law by Sukumar Ray (Published by Talking Cub) is a delightfully nonsensical piece of fiction. Rendered into English by Arunava Sinha, the book is a beautiful piece of nonsense literature. This is a book that is time-tested and despite the passage of time continues to hold the readers captive. The original illustrations that accompany this translation make the reading experience all the more endearing.

Nonsense literature is difficult to write and very few writers accomplish it. However, translating nonsense literature from a vernacular language to English is an equally challenging task. It is here that Sinha has really excelled. While he does translate classic, modern and contemporary Bengali fiction, non-fiction and poetry into English, this genre is completely different. To recreate the sense within the realm of nonsense literature speaks volumes about his prowess as a translator.

It all starts on a day that is ridiculously hot. A young boy, the narrator, takes his handkerchief to wipe his face. However, it turns into a cat! And, a cat who converses with him and leads him into a completely different world where all the action takes place.

The fantasy world that the boy visits is filled with interesting characters. One after the other a series of actions take place, and he meets a variety of creatures. What follows is a riot of laughter, just because their conversations are so amusing.

There is situational humour and a lot of it in conversations as well. For example, he encounters a raven and they have the following conversation:

The raven was astonished. “Isn’t time money where you live?

“What do you mean time is money?” I asked.

“You’d get it if you lived here for some time. We’re facing high inflation here now, cant afford to waste a second. I have been working so hard and even stealing to save some time these past few days, now I’ve spent half of it arguing with you.”.

The book has ‘funny’ situations that the reader can imagine. These are absurd and hence elicit humour, and are a source of great delight. For example, the raven doing accounts. Or, an owl acting as judge. Sometimes the humour lies in the combination of words put together (such as bookkeeper diarrhoea). And at other times the humour lies in the sheer absurdity of the situation and the manner in which it is described.

“I found an old man thrashing about, pinned down by a gigantic shoe. He was identical in appearance to the old man with the hubble bubble.”

The book also has nonsense verse within it.

‘The bat said to his friend the hedgehog

Tonight, I will show you a ledgedog

You will see the owls and insects fly

Around us, the poor mouse will die.

Frogs and tadpoles will just sweat in fright.

With teeth that chatter in fear

Skunks will run with tails between their legs

And you will see the chimbi chango kegs’

And then there is a bit of wisdom

‘A crocodile ate half of my uncle,’ he

said, ‘so the other half died.’

The jackal said, ‘Do you know anything about litigation?’

Hzzbuzzbuzz answered, ‘Of course I do. Someone makes an accusation, he’s the plaintiff, he has a lawyer, then they bring an ant from somewhere. He’s the defendant, he has a lawyer too. There are ten witnesses on each side. And there’s a judge, who sits there and sleeps.’

Sukumar Ray has also written a collection of nonsense poems, titled, Abol Tabol. Of course, looking further to world literature, one can find classic examples of this genre. In A Book of Nonsense, Edward Lear creates over 100 limericks that turn logic and sense upside down. In Alice in Wonderland and its sequel Through the Looking Glass, Lewis Carroll creates a dream world that also defies logic, yet consistently remains logical.

In The Jabberwocky, Carroll takes things a step further by inventing his own language but balances, in a logical way, words we do know, with words we do not. The result is that these nonsense words, rather than coming across as pure gibberish, tell an interesting and comprehensible tale.

When I read Habber-Jabber Jaw, I found the experience strangely liberating. I felt as if there was something in those pages that melted fixed ideas in my head as I read along. I think nonsense literature may have a lot to offer to children and adults.

Dream big little one! The Dreamers series of illustrated biographies sow the seeds of magic….

Friends behind Walls by Harshikaa Udasi