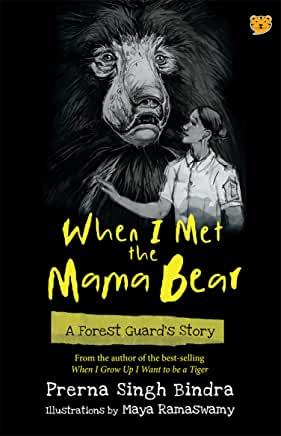 When I Met The Mama Bear – A Forest Guard’s Story by Prerna Singh Bindra (Talking Cub) takes us right in the midst of the Indian jungles, where life has its own pace and challenges. Priya is a forest guard, a single mother who lives in the depths of the jungle and performs the dangerous but important job of protecting the forest and its animals. Her daughter lives in a village with the grandmother. Priya is new to the jungle but with her supportive colleagues she carves her own path.

One night a pair of bear cubs are stranded atop a tree. The mother bear is frantically trying to rescue them. Should the forest guards intervene? Or should they let the animals be? Would a potential rescue mission be dangerous for the guards themselves? Can they redraw the lines of duty? And where does Priya stand in this? Is there a clash between the heart of a mother and the duty of a forest guard?

Set in the jungle, the story of Priya may be imagined, but she is as real as one can get. The story is based on an actual meeting that the author had with a forest guard. Priya resonates with modern women who are open to unconventional careers, and who put themselves at great risk for their duty.

The sights and sounds of the splendid jungle are also an integral part of the story. The pace of nature beyond urban jungles and the laws that govern it are evident in the background.

In Priya, young readers will see an inspiring figure. A keen learner who learns the ways of the forest. A working mother whose heart pangs for her child, who she has left behind when on duty. An individual in her own right who acknowledges her feelings of loneliness. In essence, Priya is someone whose travails and concerns will resonate with any of us!

For a child reader, When I Met The Mama Bear, presents a very real and human picture of a single working mother. The language is very simple and the book is meant for middle grade readers, aged six upwards. The Illustrations by Maya Ramaswamy complement the text beautifully. This is definitely a book to add to your collection.

Neel on Wheels by Lavanya Karthik