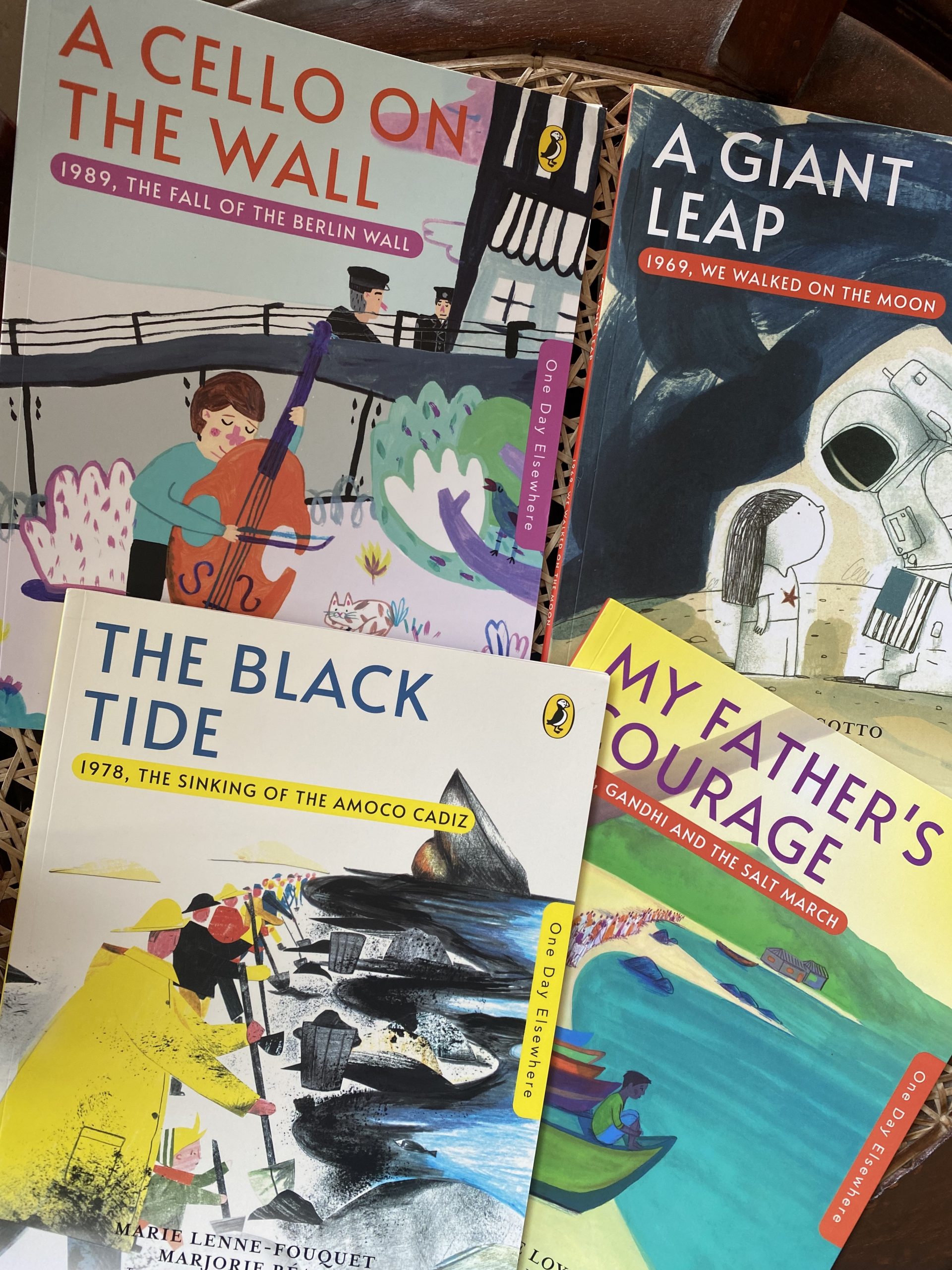 “One Day Elsewhere” (Puffin Books) is a stunning collection of picture books that retell four historically important events of the 20th century through the eyes of a child: an oil spill in France, the Dandi March, the Moon Landing and the fall of the Berlin Wall. Originally published in French, this series has been translated into several international languages. These English versions have been translated sensitively and beautifully by Nakashi Chowdhry.

One Day Elsewhere: The Black Tide: 1978, the Sinking of the Amoco Cadiz looks at the devastating impact of an oil spill through the point of view of Yann, the son of a fisherman in Portsall. “With one single shipwreck, just one single human error, kilometres of the beach and thousands of fish and seabirds will never wake up from this dark and gluey night” says the troubled child. The dark descriptions of the oil spill are evocative and heart wrenching, and saddening. But then, there is always a silver lining. In this case, it was the solidarity of people. As the protagonist comes to realize later, “The light in the darkness is seeking that humans are capable of the worst, but thankfully more often of the best. We get up, we go on and we learn from our mistakes, even the worst ones”.

A Cello On The Wall: 1989, the Fall of the Berlin Wall is about Charlie who discovers a cello that belonged to his grandmother. Hidden in the attic, this is the only possession his parents carried with them to West Berlin as a ‘wall’ tore a civilization apart.  Charlie’s grandparents are still on the other side of the wall. But the year is 1989 and revolt is in the streets of Berlin. Will people tear down the wall? The imagined story is true to historical details.

My Father’s Courage: 1930, Gandhi and the Salt March talks about the famous Dandi March. We’ve often studied about the salt march in history. But when the tale is told from the point of view of a young boy, Aslam, whose father is arrested by the British for harvesting salt, we see the entire situation in a new light. Did Aslan’s father really break the law? What were the terrible effects of heavy taxes on salt on the simple villagers? Doesn’t sea salt belong to everyone? The story evokes the colourful environs and simple life of the village of Jalalpore, juxtaposing it with the Dandi march, an event that changed the course of history. Aslam meets Gandhiji on the long march. What is the result of this interaction? It’s a tale that will surely instil pride in the reader, about the sacrifices of many common people for the greater good.

A Giant Leap, 1969, We walked on the Moon talks about the moon-landing which clearly was a big night- for humanity. But, it was also a big night for June. It is the night when Neil Armstrong walks on the moon. It is also the night when the little protagonist gets a sibling. As she waits in anticipation, it seems that the world shares the feeling. The step on the moon changes everything, and is a leap for mankind. The world would never be the same again- not for mankind and not for June whose life is enriched by a sibling now. As these two significant events unfurl parallel to each other, it seems that our lives are also tied to what is happening around us!

The overarching theme that runs through these poignant stories is about the ultimate resilience of the human spirit and also the common thread of humanity that binds us across geographies and time periods. In each story the child-narrator is impacted by the ‘great’ event in some way. Through his or her deliberations the reader can see this historical event from a very fresh perspective.

At one level, these are stories about specific events that were quite significant and made a mark on history. But on a deeper level, these are tales of what binds us all. The reader not only gets a sense of history, but a view of history from the human angle, and that too the eyes of a child. While these books are meant for primary and middle-schoolers, they are powerful as tools in the classroom to discuss and deliberate on events that steered the course of history as well as discuss the themes of solidarity in crisis.

Irrespective of the events they talk about, these books highlight some common features. One, the emotions that surround these historical events. These tales suddenly make history relevant by infusing emotions and feelings into factual events. They may have happened years back, but resonate with our hearts even today. They also touch upon things that move us all- like the uniting power of music, as the boy in Cello On the Wall illustrates when he says, “My heart pressed against the cello; we become one and the music spoke of what was in our depths, all our grief and our hopes for the future. When I was with it, I felt that anything was possible”.

Second, these stories bring out solidarity of common people in times of trouble. Whether it is poor neighbours sending food to a household where the father is arrested for picking salt; or, citizens gathering to clean the beach and sea in event of an oil spill; or people united to break the wall between them; one can see how powerful common people can be if they stick together for the common good. And there is solidarity even in happiness and achievement, as much as in times of pain.

For me, the concept of oneness is ingrained not only in the instances of solidarity seen in the stories but also in the books themselves. These events span geographies and timeframes. Yet, they are relevant to us today. The emotions that the child protagonists feel, resonate strongly even today. The books have different authors and illustrators with their unique styles. But, they strike a chord in our hearts. The books are translations from the French versions, and yet, flow beautifully and naturally talking to one and all. The theme of solidarity transcends everything else if we view these books in unison.

And maybe that is exactly what the world needs right now. That is exactly what our children should be reading and that is what we should be discussing with them. These tales are told through the eyes of a child. In three of the books, the events are indeed devastating and there is a lot of pain. However, the beauty and the pain come across poignantly in the narration. If books can indeed change the world, there is a hope that books like these will create mindful citizens in the future. Above all, in a world that continues to be torn apart by man-created devastating events, these stories from One Day Elsewhere, will inspire and show us that there is still hope for redemption!

Moodunnit- a whodunnit filled with wit and laughs!

My Big Book of Kindness from Katha books