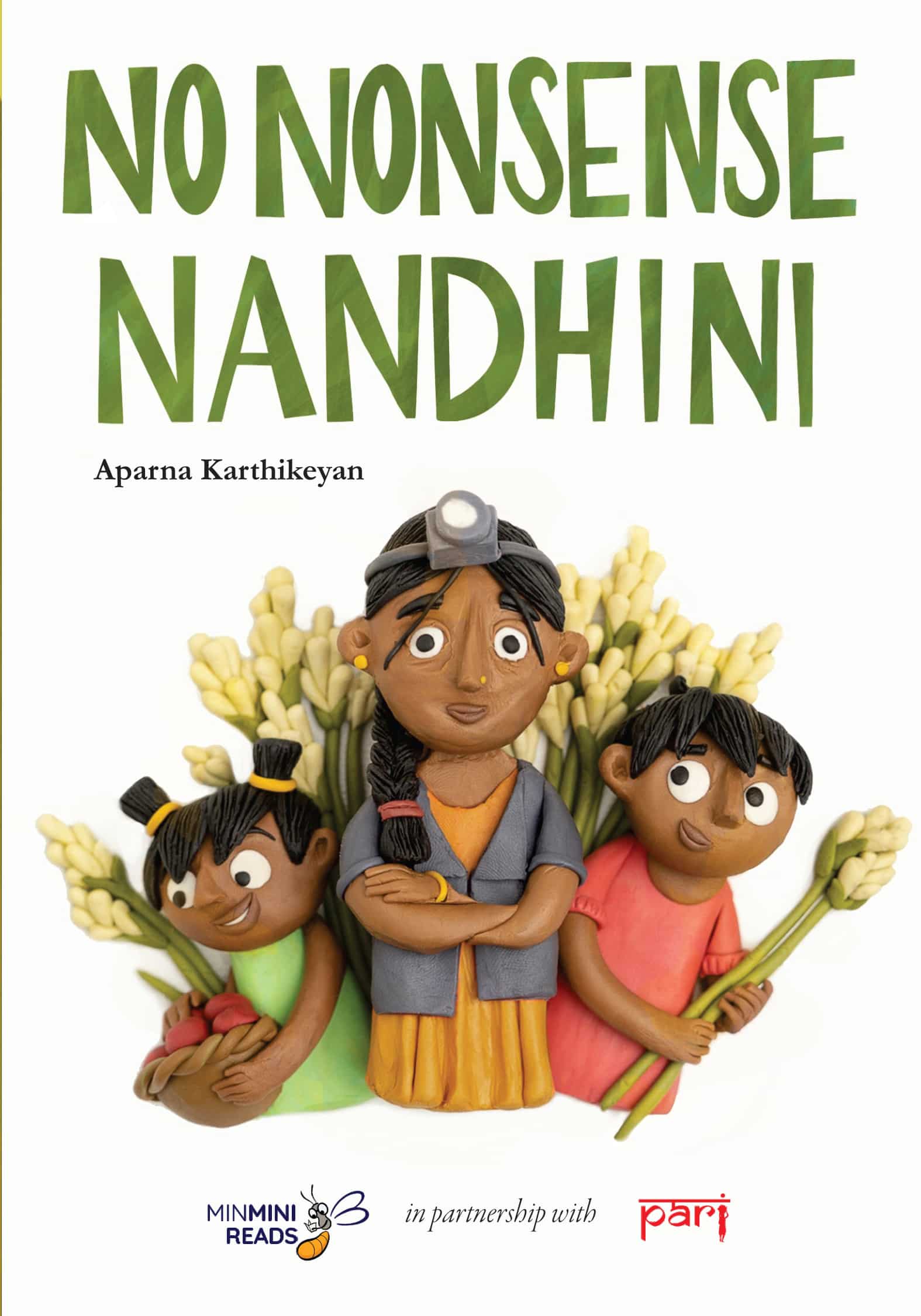 There is a touching scene in No Nonsense Nandhini, where the protagonist, a woman farmer asks a question. She asks, “‘Where are the chairs for the people who grow your food?”. This she says in connection with the treatment of farmers at banks, when they go to collect loans. Though a fictional adaptation of real-life events, the story of Nandhini will strike a chord in your heart. The no-nonsense attitude and inherent feminism in this simple village woman will infuse wonder and strength in the reader. This story is apt for city folks like us who take a farmer’s life for granted. It’s a bitter truth. Do we care, as long as we get our food on the table? Maybe it’s time for a reality check….

No Nonsense Nandhini by Aparna Karthikeyan (Karadi Tales) is a heartwarming tale of resilience and hope.  Stories have a way of taking the reader into geographical and emotional landscapes that one is not familiar with. This tale takes us to Sivagangai town in Tamil Nadu. We meet Nandhini who lived here with her parents and siblings, and her grandmother who proves to be her biggest ally and supporter in most things.

Life was exhaustingly hard with her parents toiling on their paddy fields day in and out to make a living. Most times their dinner was just a simple meal of millets and kozambu. When there was drought due to no rains they would be in heavy debt. Amma would pawn away the little jewellery that she had. Still, amma and appa did their best to educate their three children at the local school.

Always a bold girl willing to take chances, Nandhini loved school. She always dreamt of becoming a collector. However, she found her dreams slipping away when she hurt her leg and hips after a fall. As a result, she did badly in math in her board exams. But she does not allow that to deter her. She sets her eyes on the horizon. Soon a happy family life in the city follows. But, tragically, her husband meets with an accident with Nandhini becoming a young widow.

Nandhini shifts back home with her two young children Naresh and Deepa. In want of a better future Nandhini starts the business of setting up a farm. She grows vegetables and then bulbs of the fragrant sampangi flowers which are used for garlands and essential oils.

But this too is no mean task. There are mounting debts and lots of struggles to make it successful and running. Donning a miner’s lamp on her head she wakes up at midnight. Every night she goes to her field to harvest around 40 kg of sampangi flowers. These are packed in sacks to have them all collected at their local santhai (market). Though exhausting and time consuming, she loves being a farmer. And then one day lady luck shines on her and she is noticed!

Do read No Nonsense Nandhini to know what it is to be a ‘woman’ farmer. Another parallel observation for readers is also the journey that a seed makes before it becomes food for your table!

No Nonsense Nandhini is one of a set of five books. These are from a collaboration between PARI (People’s Archive of Rural India) and Karadi Tales.

I thoroughly enjoyed reading the engrossing story of ‘No Nonsense Nandhini’ by Aparna Karthikeyan. It also brought back some fond memories for me! The sampangi flowers or tuberose is known as Rajnigandha in Hindi. They were one of my father’s favourite flowers. The whole house would be enveloped by its fragrance. And he did love buying flowers!

‘No Nonsense Nandhini’ by Aparna Karthikeyan will appeal to the tweens and YA readership. The book also fits in beautifully for group reading and discussion sessions.

Poyani Mehta is a former School Librarian, the co-host of Stories Between the Lines-A Podcast, a freelance storyteller, performs in theatre for children for the Secret Passages Storytelling Circle. She is a team member of the PeekABook Children Literary Festival. She is a bibliophile, rescues injured birds and enjoys spending quality time with her young daughter and Shanti, her indie pariah dog who lives across the street.