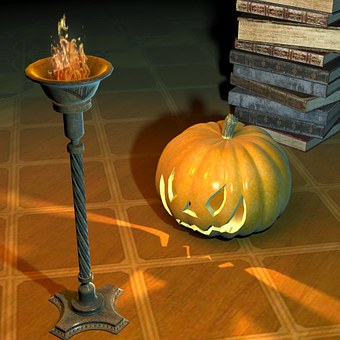 As we near the end of October, you may want to think about getting some Halloween books to add to your collection! But first, let’s read a little about the fest itself….

‘Trick or Treat’, ‘Trick or Treat’ rings out the loud excited shout out in the evening air, and what if a demonic lit up carved out orange pumpkin stares straight at you, that is the cue for us to know that it is that time of the month, the festive Halloween holiday, which falls on 31st October.

Halloween is celebrated in many parts of the world, especially in Ireland, Canada and the USA.  A holiday, Halloween is a summer’s end festival and the beginning of the winter season, one day before ‘All Saints Day’ which falls on 1st. November. According to old Celtic beliefs it is said that evil spirits roam around freely on the 31st October. So people wear masks and other disguises to escape detection by the spirits and bonfires are lit to ward them off. It also symbolizes the Celtic fertility and rebirth and harvests of crops.

Children dress up in creepy monster outfits, like a ghost or ghoul, witches or skeletons with a black cat in tow, put ghoulish face make up and put up spooky decorations in and around their houses.  They many a time carry the ‘ Jack-o-Lantern’ which is a hollowed carved out pumpkin with a demonic face which is lit up with a candle inside.

Trick (mischief) or Treat (candy) is a door to door exciting fun much looked forward to activity, when children go to the neighboring houses asking for candy. If denied they will be up to some harmless pranking mischief.

There are many a fiction and non-fiction books available for young children and young adults (YA) to read on/for Halloween. You could start with the list below!

But, before we beginning, if there is ONE book that is quintessentially Halloween in spirit, it is the old classic Dracula. This books popularised Vampires and is the base of so many tales around them! Here are some editions….

For young children- ages 3 to 7 years

Room on the Broom – A Picture Book by Julia Donaldson and Illustrated by Axel Scheffler. It is a story of a kind witch and her cat who invite three friends (a dog, a bird and a frog) for a ride on her broomstick.

The Little Old Lady Who Wasn’t Afraid of Anything by Linda Williams and Illustrated by Megan Lloyd. It is the story of a little old lady who was not scared of anything. But, one autumn night she heard many a funny noisy sounds and got the scare of her life. Good for libraries, little children and storytelling.

Pete the Cat: Trick or Pete by James Dean: A lift-the-flap book about Pete the Cat celebrating Halloween with spooky surprises. Best for toddlers

The Berenstain Bears Trick or Treat by Stan and Jan Berenstain.  A book on Halloween about a brother and sister bear who are excited to go Trick and Treating in the neighbourhood and want to avoid a visit to a spooky house but they have a surprise waiting. It teaches children the difference between right and wrong

The Peculiar Pumpkin Thief by Geronimo Stilton: All the pumpkins have disappeared from New Mouse City just a few days before Halloween and detective Hercule Poirat has to solve the mystery before Halloween

The Worst Witch and the Wishing Star by Jill Murphy: Be careful what you wish for! Mildred Hubble, disaster prone witch in training, is back with a magical adventure

Bone Soup by Cambaria Evans: Finnigan the skeleton is known for his huge appetite. But, on Halloween none of the creatures want to share food with him. And so ghoulish Funnigan uses his wits and a special ingredient tosses up a cauldron full of Halloween magic.

Goosebumps: Most Wanted. The Haunter by R. L. Stine: Sammy Baker is a quiet child and on Halloween he wants to prove he can be brave and goes at midnight to an abandoned house.

Spelled by Anne Eastwick: A stolen child, Willa is a witch and does fun magic in this adventurous book.

And The Silver Ghosts Fly Around:  Cumulative Halloween Poem for 4 to 13 years. A read-aloud and song- along illustrated poems on Halloween

The Halloween Night: The Doorbell Rang by Lori VanKirk Schue: Rhyming text and silly illustrations help bring the whimsical side of Halloween alive with fancy dress up and spooky decorations with a creative approach to learning, that it does not have to be scary.

Halloween books for the Whole Family

Some activity books can provide endless hours of fun for the whole family!

And yes, if you want a Halloween watch recommendation…..Hotel Transylvania the movie which has 3 parts is the perfect animated entertaining movie to watch during Halloween. It is about Count Dracula and his daughter 118 year old daughter Mavis. Added to that are all the characters ghosts and ghouls, witches and skeletons and werewolves. Fun and colourful and captivating with a lot of happy zing.

So, which of these Halloween books is going to make a cosy place by your side this year?