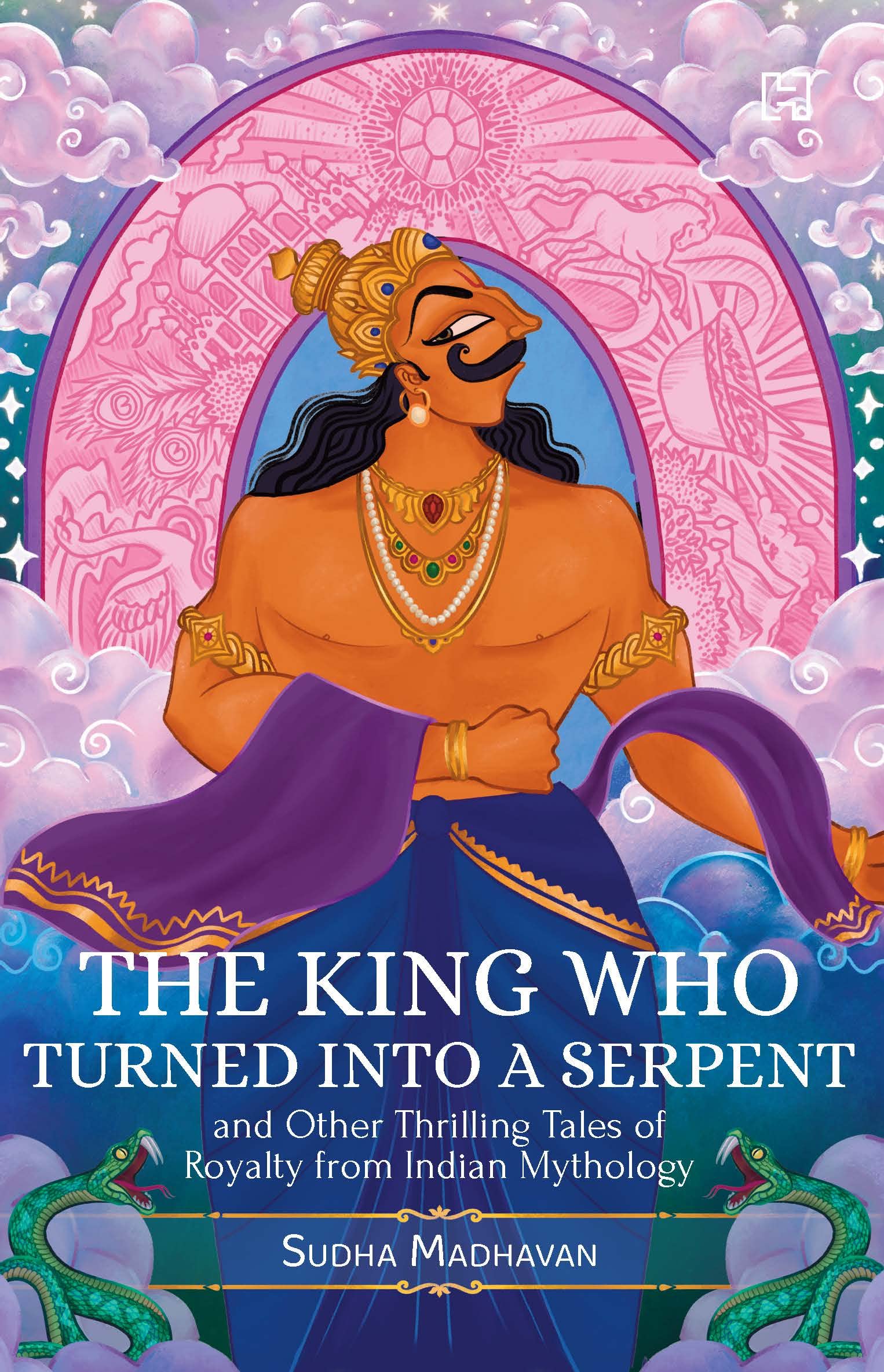 We love stories! We all have grown up listening to and reading stories from our ancient past, generation to generation. They are the same but the style of storytelling has changed. Illustrated or textual or just plain oral storytelling these narratives made our life exciting and enthralling. They still do. We are willing to put our work aside and listen. Be it the epics like the Mahabharata and Ramayana, battles of brave kings and queens fighting for glory, stories of celestial beings and apsaras, wicked demons, and demonesses, or anecdotes with moral learnings and teachings. All these stories have the power to reconnect with young and old.

So, come, let’s get astonished and find out what made these rulers glorious and illustrious in these 15 action-packed stories in ‘The King Who Turned into a Serpent and Other Thrilling Tales of Royalty from Indian Mythology’ by Sudha Madhavan (Hachette India) for children 10 +

Mentioning a few from the engrossing 15 stories.

King Nala of Nishada was a great horseman and an amazing cook. He had a cookbook, ‘Paka Darpanam’ to his name. Must be one of the first. But despite these positives, he had a weakness for the dice, which led to his downfall. Was there a way he could get back his lost glory?

The King Whose Minister Told Him ‘Everything Happens for the Best’

This story is of a king and his minister who habitually loved to repeat the phrase, ‘Everything Happens for the Best’. Finally, it got on the king’s nerves so much that he got his minister imprisoned. One day after a tiring hunt, the king had a narrow escape from a tiger attack. Upon return, he told his minister all about his escape story. So, what do you think was the quick witty quip? Did the minister’s answer win back his freedom? Do you have a friend or two who love to repeat a phrase time and again and does it come in handy?

Por Kai Pandian, the King with the Golden Hand

We all know of Ayurveda and Naturopathy as medicines of the past. But who knew that medical sciences and surgery were advanced even some 2000 years ago? Like prosthetic surgery? This story is of a just king from the Pandya dynasty. As is a rule this king too would travel around his kingdom incognito, disguising himself to see if his people were happy under his rule. But one day on his nightly jaunt he made a mistake and that was a cause of commotion at his court the very next day. So as to punish himself he paid a heavy price leaving his subjects aghast. What price did he pay and could it be rectified? Why do you think the name Por Kai Pandian is a befitting name for him?

Our Indian legends and myths can many a time baffle and perplex us, leaning on the traditional, events and experiences of the past. I liked Sudha Madhavan’s book. It has a wittiness to it with many chuckles. A wonderful storyteller she has a flair to make something unbelievably believable.

Hachette India has come up with these 2 wonderful titles, each with 15 narratives. The Queen Who Ruled the Waves and Other Amazing Tales of Royalty from Indian History by Indira Ananthakrishnan and The King Who Turned into a Serpent and Other Thrilling Tales of Royalty from Indian Mythology. The two titles are a treasure bonanza for the middle graders and adults who like to dip into Indian chronicles of chivalrous kings and queens and ancient folklore. Good for gifting, school libraries, and book club discussions.