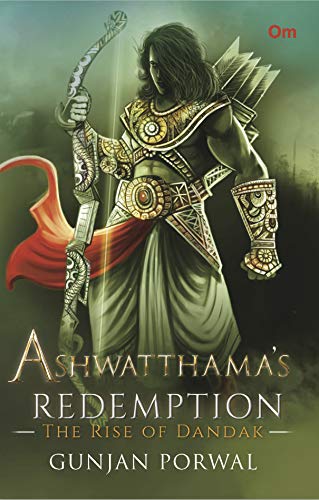 Ashwatthama’s Redemption: The Rise of Dandak is set one hundred years after the Mahabharata war. The story begins when peace is paramount, but there seems to be an impeding warning of a war to some. Some ancient evil power threatens to destroy the world. Ashwatthama may have played the villain in the Mahabharata, but it’s time to play the hero. He is the only one who can save the retrieve the Kodanda- the lost bow of Rama. It is this bow that would redeem mankind. The mythological fiction story imagines the life and travails of Ashwatthama after the war. Do the demons of the past continue to haunt him? Or, is it time to turn the wheels of Karma? At one level, the novel is an exciting adventure story set in ancient India. At another, it is a tale of redemption, courage, and the futility of war.

Bookedforlife chats with the author, Gunjan Porwal, about the inspiration behind the story….

What made you choose to imagine the story of Ashwatthama? The Mahabharata has a rich cast of characters. What about him appealed the most over the host of others?

The Kurukshetra war was full of adharma events. There was no honest side. However, the legacy of Ashwatthama was ruined by one night of infamy, who otherwise must be counted as one of the greatest warriors of the Kurukshetra war. Also, apart from Karna, I found that Ashwatthama’s story had some layers of complexity – being the dishonored warrior, a loyal friend, a hated enemy, part-incarnation of Shiva. So, I decided to take up writing about him.

What kind of research did you undertake for the book?

The research included going through lots of online resources. One of the things I had to make sure was getting the lingo and small details right, like things that would be available in that era – lots of daily use items, or metals, some of them were not discovered during that time. For example, leather was not there, but tanned animal skin was there. So, I had to spend some time in making sure that the small details are right, and the reader does not get any false information. I do not wish for the reader to be looking up something and saying ‘This is not right. Glass was not invented then.’

Recently there have been many books that look at retelling or reimagining popular stories from our epics from different points of view. This genre seems to be creating a strong niche of its own. Could you share your thoughts on the same?

There has been a surge in Indian Mythology books. I feel it’s a great thing that the young generation is digging into that, and savouring it. There are lots of stories that are coming out, some of them fantastic ones. We have all been influenced by Western History, and Greek mythology. What better way than books and movies to preserve our stories for future generations! Indian mythology is one of the richest in terms of details, and it good to see so many new stories about characters that were unexplored before. On the other hand, the quality bar has gone up quite a bit.

The theory of karma and how it plays out across lifetimes is a theme that is brought out beautifully in Ashwatthama’s Redemption. Was it a conscious decision to add this philosophical element?

It was more of a thought that came during the writing process. Karma was always the underlying theme, because Ashwatthama’s redemption had to be tied to it. But, when I was writing the conversation between Ashwatthama and Urmila, I thought that this part must be more than just a retelling of what happened. It should convey a message to the reader, while telling the stories. Urmila is young, and she would learn the hard way. What better way for Ashwatthama to hand over the reins to the younger generation by sharing his knowledge and learnings? So, I decided to give it the karma angle, which I believe also ties later with the redemption part.

You work as an engineer and you are also passionate about mythology. Do let us in on your experience of writing this book. How did you balance it with a demanding day job? What is your writing schedule like?

It takes time to write the first draft. Post that, things are bit easier. Of course, it varies from writer to writer. For me, I started writing the first draft with a view to write a 200-page book. It could just be a 100-page story, but must be an engaging one. I had not outlined this one before. There were many points where I got stuck for days, and would not know what to do next. That took a lot of time. But it was refreshing to delve deep into mythology, and figure out facts that we did not know before.

As for the writing schedule, I hardly could find time during daytime. I wrote mostly during nights, and when I got time during weekends. That’s one of the challenges all part-time writers face. But once a schedule is set, it becomes easier.

Ashwatthama’s Redemption demands a sequel! Any ideas about what would follow “The Rise of Dandak”?

Yes, I want to explore Ashwatthama’s character further. A warrior like him has gone through much, and there are lots of other parts of his life that can be explored. The story also could not be so simple as to simply kill Dandak after his resurrection, after all the background set for him. So, a sequel is in the works!

Well, we’re sure that readers are waiting to set sail with Ashwatthama and delve deeper into his adventures!