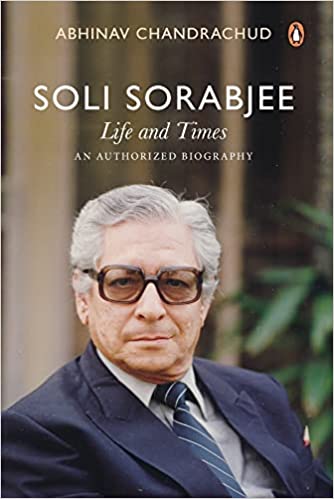 In the 2000’s Soli Sorabjee’s column in the Indian Express, titled “Soli Loquies” brought to the common reader a direct and nuanced portrayal of the Indian legal and judicial system. Esteemed jurist and twice Attorney General of India, Sorabjee was known for his commitment to the cause of truth as much as he was known for his acute legal prowess.

A soliloquy is a monologue in which a character in a play speaks only to the audience, and not to any other character. Besides the obvious reference to the name ‘soli’ the very essence of the soliloquy came out not only in the columns but also in his general approach to his life and work.

In this well researched authorised biography published by Penguin Viking , Soli Sorabjee: Life and Times. An Authorised Biography Abhinav Chandrachud stays true to this essence. What draws the reader in immediately is the contrasts that he presents about Sorabjee at the onset, in the very first chapter. It is this that makes you want to relive deeper into the life of the man himself, against the backdrop of the times he lived in. For instance, the story of his childhood mirrors the evolution of Bombay and will bring back nostalgia for old times!

The book chronicles his childhood, youth and further professional career interspersing this information with key themes of what was happening in the country at that time. As we read about his childhood, we also see Bombay evolving in the backdrop, and as we read about his career further we enter intricacies and nuances of the politics of the times.

Another interesting aspect of the book is how one can link the past and the present. His prodigious memory for memorising railway timetables probably worked on his memory muscles! His memory for legal citations was also phenomenal! His love for literature and experience with the same at St. Xaviers High School left an indelible trace on his mind.

I believe that a good biography must offer transparency and authenticity. This biography draws from varied sources including interviews with family and associates and friends, the man himself and other published material.

What really stood out for me as a reader was that Chandrachud has tried to be dynamic throughout and posed many questions constantly trying to view the life of his subject from a different angle. This style of writing makes the biography quite engaging and interesting.

The book speaks to different readerships. On one hand, it obviously speaks to the lawyer fraternity, especially those who seek to build their careers in law. They would have a lot to glean from his life. Right from his days at the iconic Government Law College where stalwarts like Nani Palkhivala taught him; to his foundational experiences in the field that shaped him and then of course his roadway to success from Bombay to Delhi, where he now represented cases in the Supreme Court. It is amusing but educative to read about the different ‘advice’ rendered to him in this growth phase and how it stood him in good stead. For instance, he was told to sharpen his memory as that would always help him in court. As it turns out, this is pretty good advice for a lawyer!

Since he was the Atteroney Genereal of India twice, politics makes up a huge chunk of the biography. The book is also a history of the times he lived in, and the reader catches a glimpse of India in the throes of change. From this perspective it will also be of interest to the general reader.

In 2021, Sorabjee succumbed to Covid 19, leaving behind a veritable legacy. The well researched biography places Soli Sorabjee in the centre and through him also speaks about the times he lived in, and indeed the values he lived for!

A recipient of the Padma Vibhushan recipient, Sorabjee was also a jazz aficionado played the clarinet. Personally, I would have loved to have more insight into how these aspects of his life intersected with his professional realm, and also the role they played in his evolution as a person, and this is an area that future articles or books about him could explore.

The appendix contains excerpts from Soli Sorabjee’s favourite poems and quotes. This is a fitting way to end the biography of a man who wrote, after he ceased to be the attorney general, that he looked forward to “ a long reading holiday far from the madding crowed, with all the time in the world to stand and stare and reflect on the meaning of it all”. That’s Soli Sorabjee for you!