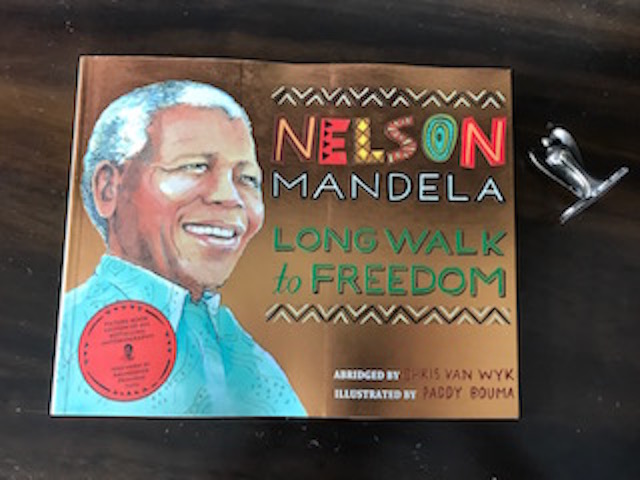 There are few leaders who leave an indelible mark in the world, not only during the times they live in but much beyond. Nelson Mandela is one such leader who continues to inspire long after his death. His autobiography, Long Walk To Freedom, chronicles the story of the long and painful struggle for freedom in South Africa.

This amazing story has been beautifully abridged by Chris van Wyk and charmingly illustrated by Paddy Bouma, especially for children.

Those who have read the original autobiography, will understand that the task of picking out relevant bits to include in the children’s version would have been a Herculean one! Yet, Wyk has done a fantastic job on this one.

The text is in first person and traces Mandela’s life from his birth in a small village, a life filled with struggles and sacrifices, to finally become the first elected president of independent South Africa.

It also weaves in a lot of contextual information about apartheid, the various tribes of Africa and the political scenario of the times. This helps children connect with the book and place it in context.

When ‘Madiba’ as Mandela is called, was young, his father nicknamed him ‘troublemaker’. As the book traces the development of the playful child to the socially aware young adult who grew to be the staunchest supporter of equality and justice in the world, one realises how this label eventually became true, albeit in a very positive manner!

The parts about the development of the African National Congress and Mandela’s long prison sentence are particularly interesting. Mandela’s life had been long but filled with struggles and sacrifices on his part for the greater good. Long walk to freedom touches upon several such sad instances in a mature, simple and straightforward manner, quite apt for children.

The illustrations accompany the story beautifully. They aptly aid the understanding of the text. Starting off with a map, placing the geographic context the illustrations move with the story taking us through the life of one of the greatest men who ever lived!

If you’re also inspired to read the actual autobiography, that’s a great idea as well!

Fun with the Grammar Skill Builder Series by Puffin Books

My Gandhi Scrapbook: An interactive way to look at the Mahatma