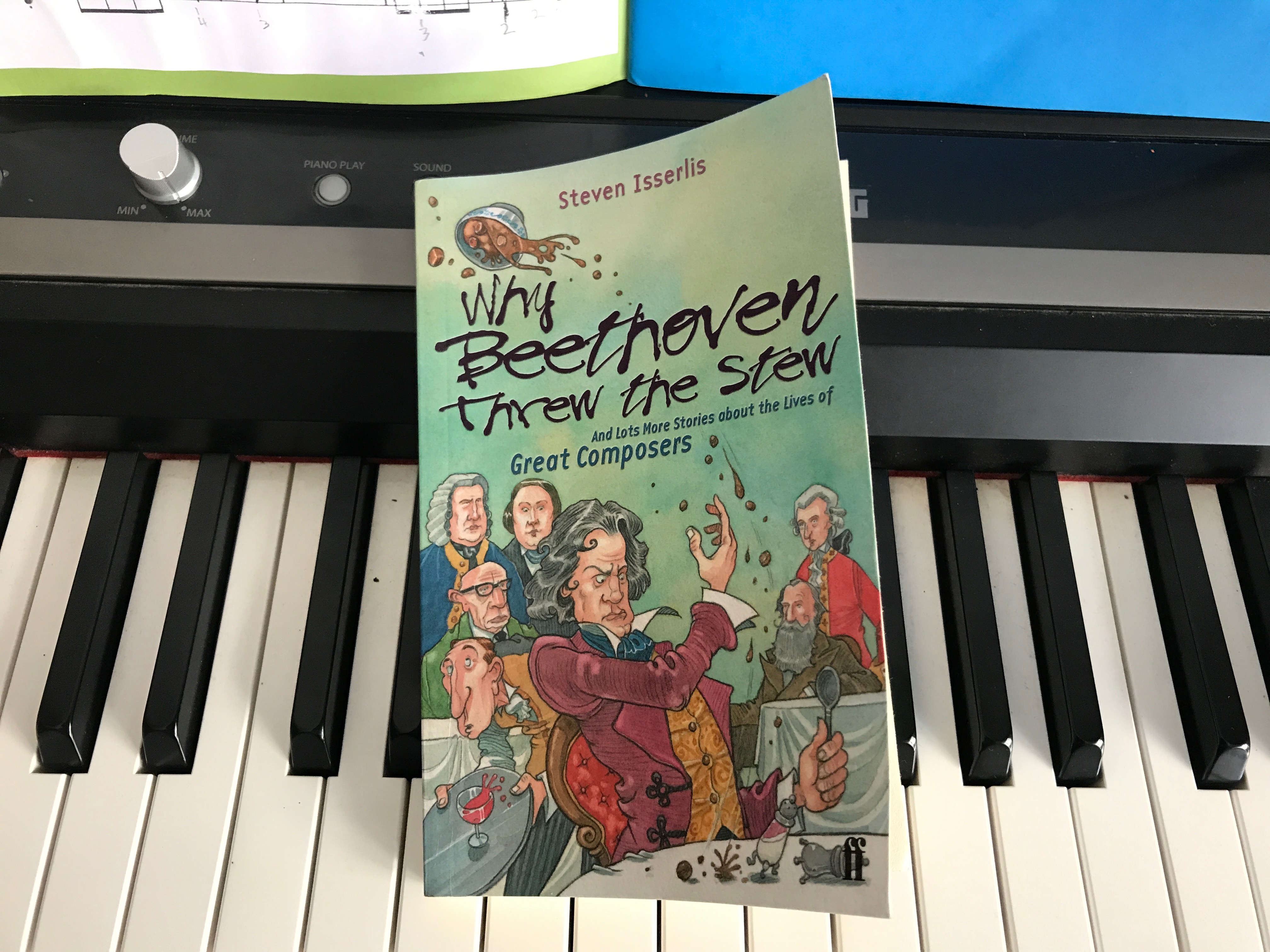 In Why Beethoven Threw the Stew, renowned cellist Steven Isserlis sets out to paint a vivid picture of the lives and times of the famous composers who created some of the best music in the world.

Inspired by his own cello teacher, he sees the book as a way children and music lovers can forge a link with the great composers by getting to know them as friends.

Call forth the masters

In this book, Isserlis introduces us to six of his favourite composers: Bach, Mozart, Beethoven, Schumann, Brahms and Stravinsky. All of them have produced beautiful music that plays on till today and will do so for eternity.

He narrates interesting anecdotes from their lives. I was highly amused to read that Bach threw his wig in a fit of rage at a player who did not play well. Or that, Beethoven did actually throw the stew at a waiter, again in a fit of rage! Consider this passage that describes the child genius Mozart, whose father Leopold often took him and his elder sister Nennerl to give concerts in faraway places:

The children gave concerts everywhere-usually starting with Nannerl playing difficult pieces brilliantly, and then being upstaged (poor Nannerl) by her little brother. He would not only play equally difficult works – even if he’d never seen them before- and duets on one keyboard with his sister (quite a novelty for those times), but would make up on the spot huge pieces based on tunes suggested to him by the audience. People didn’t believe that he was really doing it all without any preparation; they kept trying to catch him out- they’d spread a cloth over the keyboard (a strange thing to do but they did it anyway), smile knowingly at each other, and wait for little Wolfgang to make a fool of himself. It didn’t work-he played just as amazingly as before.

The language and style is very witty and informal. You would be forgiven to think that you’re actually having a chat with an old friend. There is a lot of text…packed with really useful information. If children are okay with reading more text, they can surely enjoy the book on their own. It is also a great tome to share with an adult and read jointly.

The lively black and white line illustrations provide a perfect accompaniment to the text!

What I like best about the book is the way it sees the masters of classical music as human beings with their share of strengths and weaknesses. We know their music as great, but their lives were often far from perfect. They battled poverty, insecurity, psychological problems and many other issues. This book presents them as regular humans who were obviously great composers.

I also love the way Isserlis has brought out the psychological problems faced by some of the composers, who suffered from specific disorders. It has been described in a gentle manner for it to be relatable. Take for example the following passage which introduces Robert Schumann (who was diagnosed with psychotic melancholia). The reader gets an inkling that not all is right with him, but this is done in a subtle manner.

The trouble with him was that he was never normal; either he was so happy that he could hardly speak, or so depressed and miserable that he couldn’t speak at all. In fact, speaking in general wasn’t his strong point. Once, for instance, he wanted his new symphony performed, so he went to see his friend Ferdinand David, a violinist and conductor. The two men sat opposite each other for an hour or so, while poor Mr. David tried to guess what it was that Schumann wanted. When he finally guessed, he agreed to perform the symphony; Schumann was delighted, and made gestures to show that he’d willingly pay the musicians himself. Having been that communicative, he obviously felt he’d done his bit; he sat back in silence, smoked two cigars (Schumann loved cigars), tried to say something (but nothing came out because he kept wiping his hand over his mouth at the crucial moment) and then got up to leave.

Indeed, Isserlis brings the composers alive in an irresistible manner that can’t fail to catch the attention of any child whose ear has been caught by any of the music described, or anyone entering the world of classical music for the first time.

Witty and informative, touching at times and at times plain hilarious, this a book you cannot miss if your child is deep into music. If they have a ear for music, you gotta have an eye for this book!

You can buy it from Amazon by clicking the link below. Just in case you are too bowled over by it, and still want more, there is another book that follows this one: Why Handel Waggled His Wig.