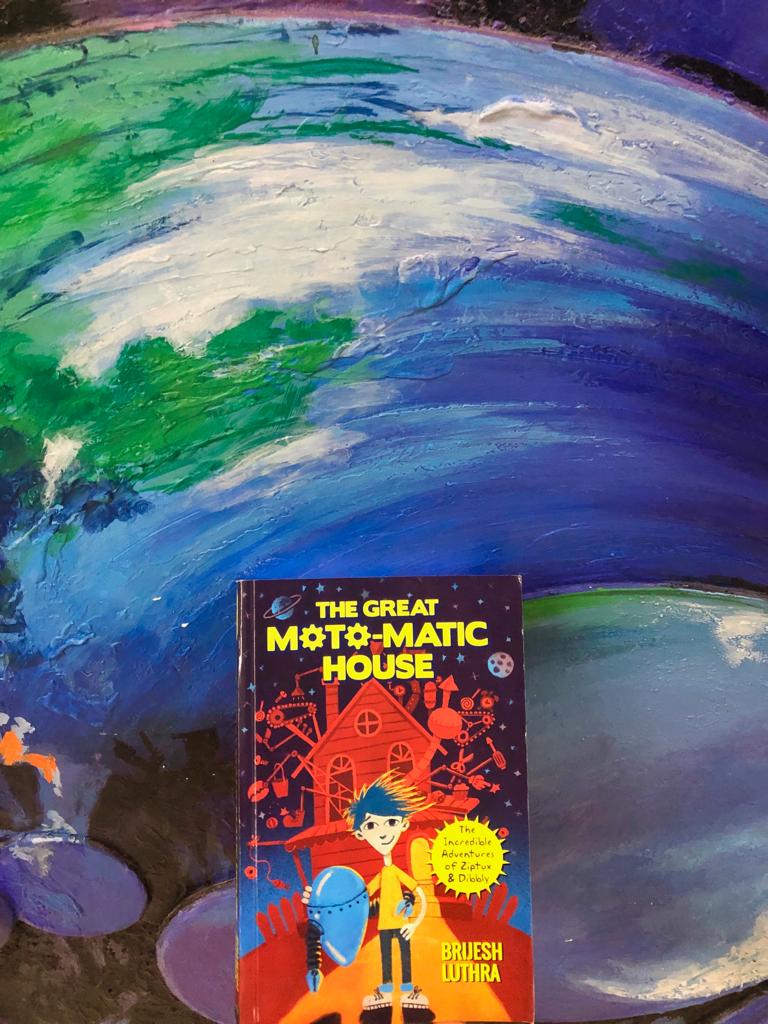 The Great Moto-Matic House by Brijesh Luthra is the first in a series that covers the adventures of Ziptux- a science nerd and inventor in his own right, and his robot Dibbly. In order to make a special invention they go to the best DIY store in the universe, that is located on another planet. But, there is someone who follows them all the way across the galaxy. And that someone makes a really stupid mistake, that could destroy the universe. Now, it is all up to Ziptux and Dibbly to save the day…or rather, the universe! The book is a light read peppered with fantastic ideas and loads of humour!

Bookedforlife chats with author Brijesh Luthra, on his inspirations behind The Great Moto-Matic House…

Humour is an important element in the book. And while the book is apparently a light read, you have woven in a philosophical angle as well, with the concept of the great fattening of the universe for instance. How did you balance between these elements as a writer?

A very good observation indeed. When the concept about the Great Fattening popped into my head, my first take was the humour angle where I imagined everyone in the universe lying on their sofas with their mouths wide open and robotic hands popping mounds of burgers, heaps of ice-cream and gallons of sugary drinks into their mouth while they watched endless re-runs of hit TV series. But the moment I converted that vision into words, it was clear to me that there was something more to that picture – a danger that humanity faces in the age of convenience today that we perhaps don’t know how to handle properly. As relevant that thought was, I needed to make sure this angle does not become overbearing. So, I tried to keep looking at it from a 10 year old’s eyes – which part of that picture would they laugh at, what would they do to avoid this scenario and so on. And the beauty of their point of view is that they don’t overanalyze or complicate things, they can take things at face value (at the risk of sounding simplistic) and deal with it in a straightforward, yet intelligent way. This exercise kept me honest. I must add that having read and re-read works by Douglas Adams, Spike Milligan, Tom Holt, Enid Blyton, Italo Calvino, and Roald Dahl, who have a wonderful tangential view of things around us helped immensely.

Can you lead us a bit into the inspiration for the book and for the futuristic universe that has been depicted in The Great Moto-Matic House?

The spark for this book was a dreaded parental duty from many years ago – giving my young son a shower. Both of us hated that activity so much that we spent more time discussing ideas for an automatic shower machine than him getting cleaned up. I have always been a great fan of Rube Goldberg and his inventions, so it was clear that the shower machine cannot be something that one can buy in a store. However advanced that contraption might be, it would have been too simple for this book. And then there are two important aspects – First is my office, which is littered with hundreds of Sci-Fi novels, books about Science, space, the universe & humour. And the second, perhaps the more important one is the overwhelming feeling that I have had since my childhood that Earth is an incredibly boring place to live on. So, it was clear that story had to be set in a place far far away for our irrelevant galaxy that no intelligent species in the universe wants to visit.  And the fact that the first draft of the book was finished just after our annual skiing trip in which we had just finished the entire Star Wars movie collection, was the icing on the cake.

You have hinted at other adventures of Ziptux and Dibbly in the course of the book. Can you share what readers can expect from future series? One of them is a prequel?

Indeed, there are many planned. Their further adventures, each of which will be independent episodes described in separate books, will be quirky pursuits instigated by day-to-day errands, simple questions, desires or requests for help from friends and authorities, human as well as alien. So, you can expect a whole lot of interstellar travel, zany situations that no human has ever faced before, leaps of imagination, many of which will have a base in real science of today and things that will come tomorrow. Simply put, the series is about a curious, inventive and enterprising boy and his desire to explore the whys and the wherefores of the universe accompanied by a quirky but immensely knowledgeable friend who all children would love to have by their side. And yes, there is a prequel which will reveal how they met – a question that I have alluded to many times in this book. The decision to have a prequel was an interesting process in itself as the prequel was written before this book. What was that reason? Perhaps that’s left for another interview.

As one reads the book, we get a sense of a warm and close relationship between humans and AI. What are your thoughts about that?

There are quite a few perceptions about AI today – a potential threat to humans as a life form, something that will ease our lives or something that will render us as slaves to the machine, or a vehicle that will alleviate the human consciousness beyond the mundane – just to name a few. The answer, as it often transpires, lies somewhere in the middle. In my version of the world, AI is nothing else but another intelligent species which has become a part of the fabric of human society. And like in any co-existence, there are aspects of vice and virtue, which will emerge in the future books. I have deliberately chosen not to analyze or dissect it further because I believe in the theory that as characters develop, they create stories and situations that an author could not have imagined when he or she started writing the book.

Can you share some of the initial feedback from young readers of this book?

To get initial feedback, I did a lot of what I like to call blind testing. I would give a few pages to kids in my circle without telling them who has written it. There were two common themes that resonated positively – the first was this combination of a robot that has an ability to get into trouble and the boy who gets his friend out of trouble. And second, was the core of the story about machines doing the tasks that kids hate, which not surprisingly is a fantasy of every child. From an improvement perspective, many of them pointed out that the beginning was a bit too contrived as I was rushing through the first few pages to get the parts of the story that I wanted to tell. Fixing that took nearly a year for me! But the important lesson I learnt was that you often have to kill your darlings.

You have extended the Ziptux and Dibbly universe by inviting children to submit their unique inventions which could find way into future stories. This is a novel way to engage with young readers today. What was the idea behind this?

The ideas about machines that are referred in the book originally came from ideation sessions I had with kids. It’s only natural that I should carry on that theme and make it more concrete in the form of a contest. But more importantly, I want the readers to feel that they are helping to build the world of Ziptux and Dibbly, rather than just passive consumers of the stories. I routinely run creative writing workshops for kids and this sense of co-creation really excites them, which I hope to harness as a collective force.

Blessed by Deepa Agarwal….magical realism for an enticing read