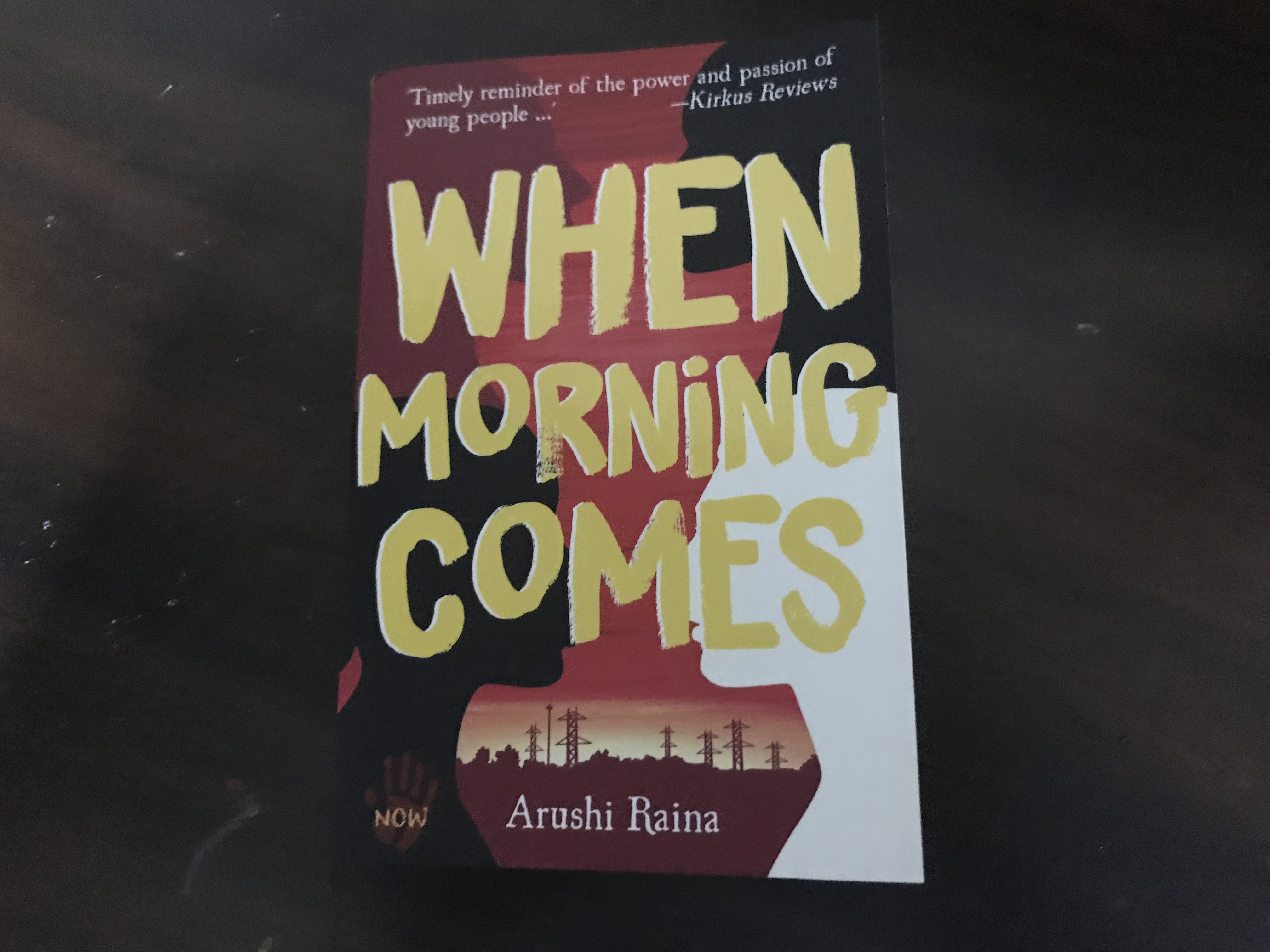 “When Morning Comes” by Arushi Raina narrates a fictionalized account of the turmoil of the Soweto Uprising in South Africa. It was on June 16th, in the year 1976, when school students in the Soweto township in Johannesburg, South Africa, began a series of protests and demonstrations against some very oppressive educational policies of the government. Those were the days of an apartheid government.

The uprising is central to the story that is narrated from four different points of view: Zanele, a black girl; Jack, a white South African boy, Thabo, a thug and Meena, an Indian girl. The narratives spin the story forward to its conclusion, though never losing sight of the central theme.

What I found very powerful were the insights by the author, gently sprinkled across the four narratives. Consider the following statements;

“Mama thought that her life, cleaning after white people who spent most of the time pretending she didn’t exist, was a life worth living”

“To be neither black nor white was to have different, unclear loyalties. It wasn’t assumed that we were political agitators”

“A week and Zanele still hadn’t been found. My mother gave Lilian three days off to look for her. Maybe, because she believed in a mother’s right to bury her daughter- even if the mother was the help”

The simple but powerful language grips the reader completely, leaving the story alive in the mind long after the book is over!

In a conversation with author Arushi Raina, Bookedforlife gets into the heart of “When Morning Comes”

What motivated you to tell this story?

I grew up in South Africa in the late 90’s. South Africa’s apartheid history wasn’t history then–it was a recent past, that as a child, I saw in flashes in how adults, and children interacted with each other. But I never really thought of writing a story set in this past, perhaps because it was too complicated, and too close.

It was only years later, sitting in a dorm room in New York, so far away from South Africa, that writing something grounded in South Africa, in a history I had caught in flashes, in classroom discussions and in my friend’s parents’ stories, felt not only something I could try and do, but something very necessary for my development as a writer.

Multiple narrators tell the story. The story moves forward with narratives from Jack, Meena, Zanele and Thabo. Why did you choose this particular form of narrative?

I think it felt like the only honest way to tell the story. I’ve always been a bit in love with points of view, how different voices can collide and come together in unexpected ways that I can’t predict.

In retrospect, I also think multiple viewpoints as a technique is very closely paralleled with my experience growing up in South Africa. Whenever I go back to South Africa, there are different perceptions of the truth, depending so much on the unique and nuanced racial, ethnic and histories that make up South Africa, and really any country, including India.

We need to live with that difference, to find our truth between the spaces of our individual opinions and perceptions. One of the saddest things to see happening around the world right now is the lack of nuance and diversity of viewpoints coming together. Luckily, it still exists in fiction.

Teenagers are associated with rebellion. However, history is a witness to the fact that the youth have been instrumental in effecting many changes. The characters are young and very resolute in their own way, quite different from the more shallow adults in the story. In your opinion, is this true of our young adults today?

Absolutely. One of the things I say when I go into classrooms today, is that teens are powerful, so powerful that they scare us adults a bit sometimes! But, with this power comes so much opportunity to change the way things are. For good and bad.

What kind of research did you do for the book?

In addition to learning about the Soweto Uprising when I was in school in South Africa, and touring the sites of the uprising, I also relied heavily on multiple documented primary accounts online and in text. The amount of time I spent trying to find books in obscure college stacks across the US (I couldn’t get to South Africa near the time of the first drafts) was not funny.

We live in a world where sadly, but definitely, children and young adults are exposed to conflict, war, inter-group hatred and the darker side of human nature. What impact do you hope the book has specifically for the young adults who read it?

I hope that they are powerful. That there are small moments, personal moments, family moments…that they have a voice and a chance to act.

Can you share any feedback that you have got for this book from your readers?

One thing I’ve always enjoyed hearing from teens is: why don’t they teach this in school, instead of boring historical textbooks? And I sort of agree. I mean that’s why I secretly wrote the book. I love history, but I only read fiction for fun. Why can’t more education thread in interesting diverse avenues, including fiction?

Another thing I hear a lot, which sort of breaks my heart, are teens who come up to me after a talk and tell me that this history in this book reminds them of their home in the Philippines, or in Egypt, or the US. Racial segregation and state abuse are big words but teens recognize it as well as anyone, and carry this experience from the places they came from.

You have lived and travelled in many countries, and this must have honed your world view. What is the role of literature in a society that is often fuelled by hatred?

Foremost, to experience something different from what we know, and then, to think about something a bit differently. It is not my goal to convince my readers of any particular message–not at all. It is to present a story and hope they will make the sense of it that they need to.

Are you thinking of a sequel following the story of Jack and Zanele? I am sure anyone who has read the book would want to know that!

I am, very abstractly. It will depend so much on my future as a writer!

The faces of young people are the faces of our past, our present and our future. “When Morning Comes” by Arushi Raina reasserts the power of the youth to effect change in a world that is increasingly being torn down by violence.