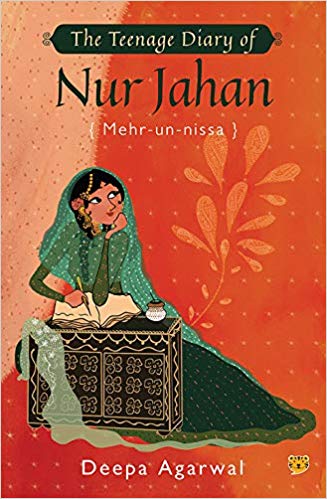 History is a funny thing. When we read history we often take it as absolute truth, forgetting sometimes that it is but a point of view. More often than not, it is the point of view of the victor or the person in power! It is quite heartening then, to observe voices of women from history being heard strongly through a variety of books thanks to the painstaking efforts of some writers. One of the fascinating voices from the past belongs to an admired queen- Nur Jahan, known as the co-sovereign of the Mughal emperor Jehangir. In a bold and highly creative attempt, Deepa Agarwal imagines the teenage diary of Nur Jahan, in a book that goes by the same name. This piece of historical fiction is especially targeted for the YA readership, and has been published by Speaking Tiger Publishing.

The diary of Nur Jahan…

Nur Jahan is a name that evokes awe and respect. She is one of the rare queens known as a co-sovereign. Yes, her beauty captivated the king, but her intellect, skills and power have firmly stamped her name on the pages of history. She may have been Jehangir’s twentieth wife, but had a great influence over him and the state. She was the de-facto ruler and the most powerful Mughal empress.

Reading The Teenage Diary of Nur Jahan gives a fascinating glimpse into the inner mind and world of such a multifaceted persona. Agreed, this is an imagined inner world, but Agarwal has been faithful to existing records about the empress’s life and deftly constructed the diary around it.

The diary of a young teenage girl who nurses the wish to marry the crown prince, is sure to be fascinating! How did she develop the grit and confidence that marks her rise? How did she navigate her way through the gender stereotyping and the veiled and sometimes forthright discrimination against girls that sadly marked those times?

However, Nur Jahan was no ordinary girl. Her desire to be the queen and uses her power was present right from the start. Her dreams to serve her people and add beauty and happiness to the world around her were strong and resolute. And, the imagined teenage diary of Nur Jahan gives the perfect glimpse into the mind of this fascinating historical character, as seen from the extract…

“What would I do if I were the governor of this province? The very thought makes me breathless. To be enthroned in a splendid court- even if it is behind a veil- with supplicants bowing to the ground before me. To issue commands that men rush to obey. To be responsible for the fate of thousands. To possess power over the life and death of any human being in this territory…”

In the foreground is the story of a young girl coming of age. But the background is peppered with tales from the emperor’s harem, life in the time of Emperor Akbar, the social scenario that accompanied those times and such other details that add their own flavour to the story.  The beautiful sights of Kabul, where Nur Jahan’s father was posted for a few years accompanies the major chunk of the book. The family then returns to the Mughal courts where her dreams have a chance of turning into reality.

The diary pertains to Nur Jahan’s teenage years. I was delighted by the colourful slices of life presented here. Equally interesting are the psychological insights that Agarwal deftly weaves in. Of course, the personal diary as a genre in itself is appealing since it gives a deep insight into the innermost thoughts of the writer!

The Teenage Diary of Nur Jahan by Deepa Agarwal will delight young adults and adults who devour the genre of historical fiction!

If you find fictional diaries of historical personalities interesting, here’s another pick up this interesting fictional diary- The Mozart Girl by Barbara Nickel, which talks about the sister of musical genius Mozart.