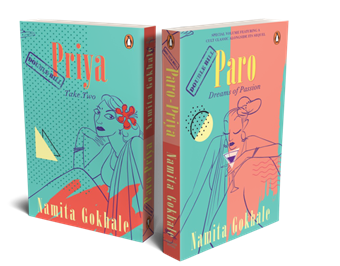 In 1984, Paro, a powerful society novel by Namita Gokhale made its debut on the Indian literary scene. Paro was first published by Chatto & Windus in London. Paro, Dreams of Passion told the tale of the beautiful seductress Paro. But, there is another character in this book, Priya, whose life could not more different than Paro’s. She belongs to the middle class, struggles to earn little luxuries of life, belongs to a very traditional family where rules of good and bad and the boundaries of men and women are very clearly defined.

Namita Gokhale recreates the Indian society of the eighties. Paro and Priya are two extremes in terms of their position and social status. Yet, as women, they are at par. Both have a fierce sense of independence, and irreverence. In a twist of fate, their lives are intertwined. Satire and wicked humour are very much a part of narrative. This is in fact one of the best pleasures of reading a book that is full of social satire.

What I found striking as well were the powerful protagonists. Both women chose not to be a victim of the patriarchal society. Both, albeit in their own ways, cautiously negotiated their way through a society where women are still expected to adhere to norms and parameters that are not necessarily fair. But, these women were risk-takers who balanced their own desires and simultaneously carved a niche for themselves.

Ordinary lives? Well, Paro was certainly not meant for that! As Priya comments  “I stared at her for some time and wondered whether she would have been able to survive a nice ordinary life,”

In the first book, it is Priya who ‘learns’ from Paro.

“One day I asked her outright how it was that she managed to manipulate people the way she did. I mean, I always did my duty and worried about other people’s feelings, and never even got a ‘thank-you’ in return; everybody just took me even more for granted than ever before. And here she was, twisting everybody around her little finger,”

The second book, Priya: Take Two, which was published in 2011, has Priya as the narrator. Twenty-five years into the future, Priya takes on the narrative. India is changing. Societal norms are different. Priya is older…and wiser.  Life does throw some unpleasant surprises, but her resilient self makes peace with life- on her own terms. Still enshrined in the image of a traditional “bhartiya nari”, Priya takes a wicked shot at society, living life the way she wants to, and refusing to bow down to the traditional expectations of the role of a woman in society.

The ‘lessons’ she has learnt from Paro unconsciously creep into her very being.

“She taught me that life’s rules can be bent by those who dare”.

It is interesting to see how characters grow and mature. How the same characters live in a changed world…? What’s better in fact is that the two books are now in a single flip edition. Paro: Dreams of Passion (1984) and Priya: Take Two (2011) merge together. Double Bill: Paro-Priya by Namita Gokhale puts one more feather in the cap of the illustrious author.