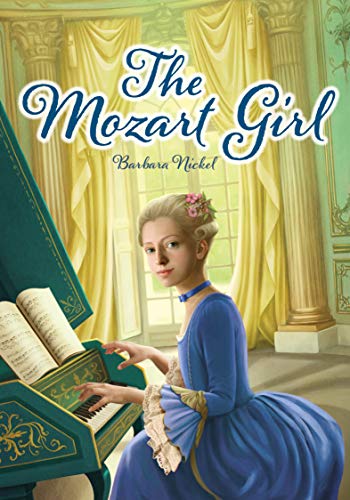 Wolfgang Amadeus Mozart was a musical genius and left his imprint on the world of music. As a child prodigy, he often performed with his sister, Nannerl. She was a good musician in her own right. What was it like to be a sibling of one of the greatest composers who ever lived? Based on research and honed by imagination, a fictional account of Nannerl’s story, The Mozart Girl, is here to entice young readers. Those who love reading the historical genre will surely love this one!

As we read the book, it is evident that Nannerl, as much as she loved her younger brother ‘Wolfi’ Mozart, did have pangs of jealousy toward him. As the story unfolds in the home of the Mozart family, this situation plays out. The duo is due to visit Bach, on a long tour and she wants to be at her musical best.

The book has imagined entries from Nannerl’s diary, which gives an insight into her dreams. She wanted to be successful and wanted to be known. She desired fame and fortune. She was unapologetically ambitious. But, her brother Wolfi, young in age and high on talent, eclipsed her.

It also evokes in the background customs and mores of the times it is set in. Nannerl’s corset hurts her and she is grumpy about it…this simple fact hints at a deeper psychological aspect, that of a girl feeling confined and not able to express herself. She also helps her mother out with household chores. Her father gives grammar lessons only to Wolfi, and teaches his how to compose symphonies, while she is supposed to play the piano, and not violin. Her apparent happiness at getting a room of her own during her visit to Paris just shows how much she yearns for freedom and mental space from her family.

The reader feels her pain and disappointments. While her parents love her and take care of her, the gender discrimination comes through in the smallest of actions that they unknowingly do.

However, does she stand up to these issues and still find her way to overcome these obstacles? How does she manage to do that? She attempts to write a symphony…. but does she finally get a chance to perform it?

The flow of the words in this story is rhythmic, almost like the notes of music! The way music pervades the lives of the children involved in it, was also something that struck a chord with me. Nannerl is creating her own symphony in her head, in secret, and how a simple action of rubbing her brother’s back to pat him to sleep when he is ill, provides inspiration for her slow piece is something that I find amazing.

This book goes on to show how we are shaped by the realities of our time and by the experiences we have. Wouldn’t we have been different, for good or for bad, if the significant people we interacted with during our formative years, had done things differently?

This book led me to question- would Nannerl have been recognized as much as a genius as Wolfgang Mozart if only she had an equal opportunity to learn, train and perform as her famous little brother did?

As the story goes by following the famous children through Europe on their performance travels, we see Nannerl’s internal growth. She grows in confidence and boldness. Albeit in little steps, her assertion of her own individuality and her talent, in a world dominated by patriarchy and over-attention to her younger brother, she insists on her own identity. Does she succeed? This is exactly what the reader wants to find out. This is exactly why the reader somehow just can’t put the book down!

The book also opens our eyes to the women of the past. As modern readers we realize that their talents may not have had the platform they deserved due to the society and thoughts of the time. It forces us to look at genius with a different eye. If her father had given her equal attention would she not have been as popular as her brother? No one can deny his talent. But, was her talent compromised or subdued unknowingly?

The genre of historical fiction is a fascinating one. The Mozart Girl, aka Nannerl, steals the show this time!

Immerse Yourself in the Enchanting Tale of The Magic Cup